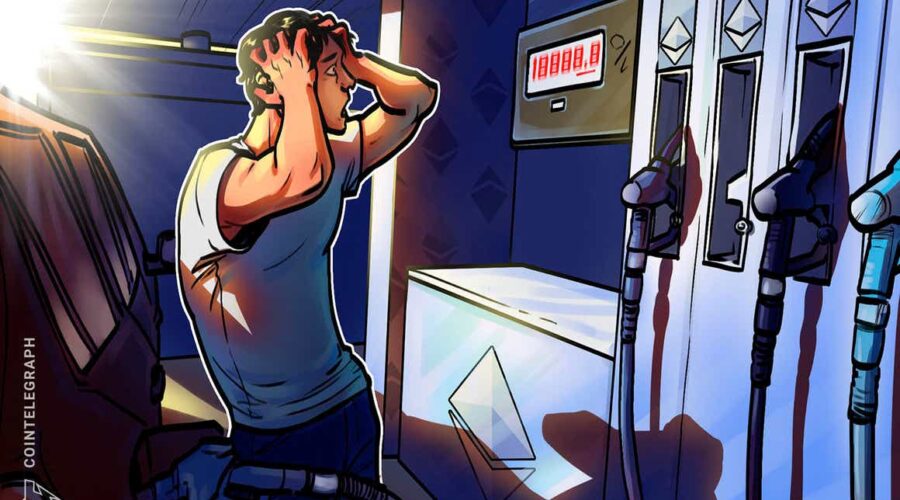 Fees.wtf is a simple service that shows Ether (ETH) users their lifetime spending amount on Ethereum blockchain transactions by measuring gas. You plug in your wallet address on its website, and it tells you how much gas you spent.

The project released its WTF token in an airdrop Friday. Essentially, users were able to claim WTF tokens as well as a “Rekt” nonfungible token (NFT) for 0.01 ETH. The Rekt NFT grants lifetime access to the pro version of Fees.wtf.

According to its Discord announcement, the initial launch planned to offer 100 million WTF, and the “circulating supply will be the main attraction in the tokenomics.” However, it didn’t quite go as planned.

Following frantic trading behavior between bots in the opening hours of the airdrop, one bot ran off with a reported 58 ETH, or $180,000. According to Etherscan, 58 ETH was drained from the Wrapped ETH (wETH) and WTF liquidity pool.

Social media channels were quick to respond because many airdrop participants lamented losing thousands of dollars in ETH. The WTF team chimed in two hours after the airdrop to calm their ranks:

“Immediately on launch there was only a tiny bit of liquidity and there were ape bots that were chucking in 100s of ETH into a pool with an ETH or two of liquidity. They also had high slippage and ended up being sandwiched by the other bots which essentially drained all their ETH.”

Basically, within five minutes of the token launch, poor liquidity pool management from the WTF developers left the liquidity pool exposed. As there was low liquidity, bots were able to manipulate the price of WTF to then sell for wETH.

The bots battled it out until one winner took home the pot. In effect, the bot stole from users who provided liquidity to the pool, trying to claim their WTF tokens and Rekt NFT. The victor managed to send an “ultra-fast transaction at 3,000 Gwei,” making a 6x return on their initial investment.

The WTF team sent out another Discord update two hours after the airdrop, stating, “The core contracts are all fine, this was a war on Uniswap.” The team added, “We hope no one was affected by it.” However, as has become a common occurrence in airdrops of late, many users lost a lot of money.

The price graph of the token since launch paints a thousand words. The initial spike shows the bot activity swiftly followed by a 10x loss in value.

The official WTF Discord group is brimming with users sharing stories of losing money. Some are “shaking” with rage, while death threats and lawsuit claims are rife.

As daylight dawns on the project, some Twitter users have called out the project as a Ponzi scheme. The referral element to the project is spurious. Referrers of the WTF project claim 50% on fees “to make wtf go viral,” while the WTF team earns 4% from each transfer. In total, the WTF team claimed almost half a million United States dollars in token transfer fees in a little over eight hours.

The WTF project states merely that the supply of tokens is “deflationary” and that 40 million WTF tokens will go to its treasury. There is not a great deal of detail regarding the token distribution. Twitter user Meows.ETH concluded their Twitter thread with a zen approach to the controversial project launch:

“If you were fortunate enough to claim a big amount of $WTF and cash it out for a profit, be happy. Unless you’re attempting to bot the initial liquidity, don’t FOMO into buying a newly launched altcoin with high slippage.”