First of all, signing publicly means seeing the public as a court. The public is not the court though, the court is the court. Rule of law does not mean democratically voting by the majority on what is truth.

Secondly, following the thought of publicly signing to prove an identity, we step into a world where people are not people anymore, but numbers. Imagine your private key gets into the wrong hands. Since there is no physical tying of private keys to people, some could use the same private keys of others, and then what? Who signs for whom, for what, in what matter?

This is not just a question of theft of private keys. If your identity is a private key, you are the private key. If we become numbers, we become exchangeable like numbers.

The holder of a private key is not proving his identity by simply having access to the private key anyways:

Your keys in Bitcoin do not provide proof of ownership or identity. At best, keys may be associated with possession. In the realm of English law, there are many laws associated with the subject of possession, but possession, contrary to popular dogma, is not the same as ownership, and it does not guarantee an individual’s identity. Pay attention to the “Traditional Privacy Model.” If we zoom into it, the public is being firewalled from the identified transactional history.

In Bitcoin, we have a “New Privacy Model” that firewalls identities from transactions:

Anarchists and parts of the crypto cartel thought of this firewalled identity as a way to interact anonymously with Bitcoin. However, the fact that in Bitcoin identities are firewalled does not necessarily mean users of Bitcoin cannot be identified.

Want to know how to identify users of Bitcoin? Hint: not in Bitcoin, but outside of Bitcoin.

The Bitcoin white paper talked about the necessity of firewalling identity from the chain. Doing so does not remove the ability to identify individuals, but it is rather done in a manner that is not public.

Firewall does not mean impenetrable. You can get through a firewall, it is a question of effort. The EU is already penetrating the firewall by regulations via tough AML/KYC laws concerning digital assets and so called “cryptocurrencies.”

See how it works? Bitcoin in itself has identities firewalled, but outside of Bitcoin—in the “real world” so to speak—we have other privacy rules. These privacy rules shine into and onto Bitcoin. Imagine the crypto cartel as moths having to fly to the light, only to get burned.

The whole mentality behind asking someone to sign publicly in order to prove an identity is actually anti Bitcoin. As shown above, Bitcoin has identities firewalled. It shows that the entities that ask for such things concerning Dr. Craig Wright do not even want Bitcoin according to the whitepaper. They themselves want their identity firewalled in Bitcoin, but others shall sign publicly to prove identity?

We are not private keys, we are human beings. 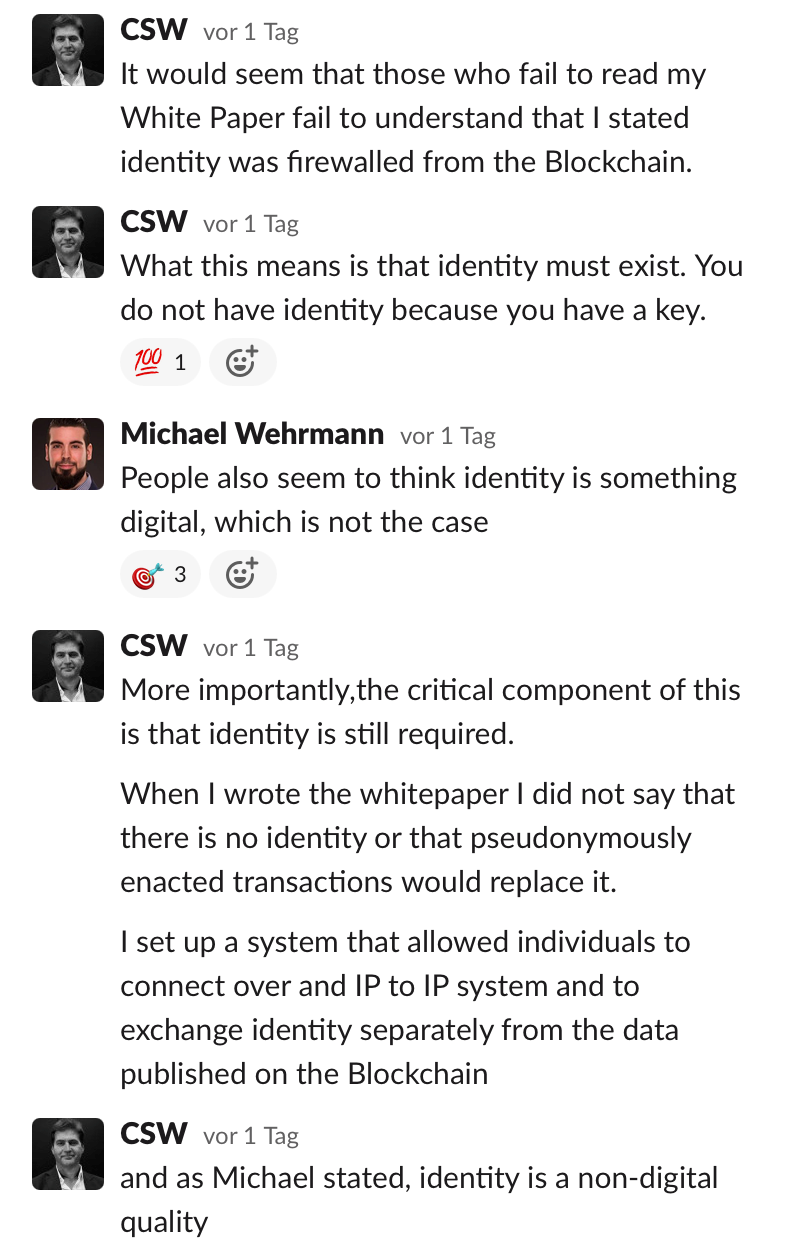 27/07/2021 Crypto Comments Off on Are we private keys? Bitcoin and identity
Markets