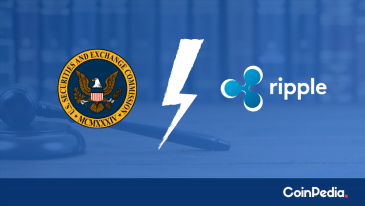 Ripple has achieved another small win in its lawsuit against SEC. The SEC’s attempt to quash a deposition of a former agency official William Hinman was denied by US District Court Judge Sarah Netburn.

The deposition could bolster Ripple’s argument that the XRP coin is not a security. Ripple can have Hinman speak about the reasons for his stance on ETH at the time, and then try to apply similar logic to XRP, provided SEC does not make an appeal.

Ripple believes Hinman’s deposition could give “a critical window into the SEC’s communications with important third parties about the regulatory status of digital assets.”

The SEC’s defense was that Hinman was merely expressing his own opinion, not that of the agency. They also argued that this deposition “would subject high-level government officials to depositions regarding every law, regulation, or policy they consulted on or spoke about and that later underlay an enforcement action.”

Also Read : XRP Price In Accumulation Phase! Is the SEC Decision an Impending Catalyst for XRP to Rise Again?

Ripple Labs had earlier requested a deposition with Hinman, scheduled on June 30. The SEC however made an attempt to get the deposition quashed. The regulator claims that Ripple has failed to demonstrate the “special circumstances” that would warrant the deposition.

What put William Hinman on the radar is his 2018 speech where he said that “current offers and sales of Ether are not securities transactions.” The SEC has previously admitted that the agency’s staff was involved in drafting the speech.

Looks like a surge to $0.620 would limit further gains. However, if it manages to have an extended rally the crucial $0.65 level can be tested.

In case XRP fails to hold those levels and start plunging, the support levels will be at $0.58 and $0.56.