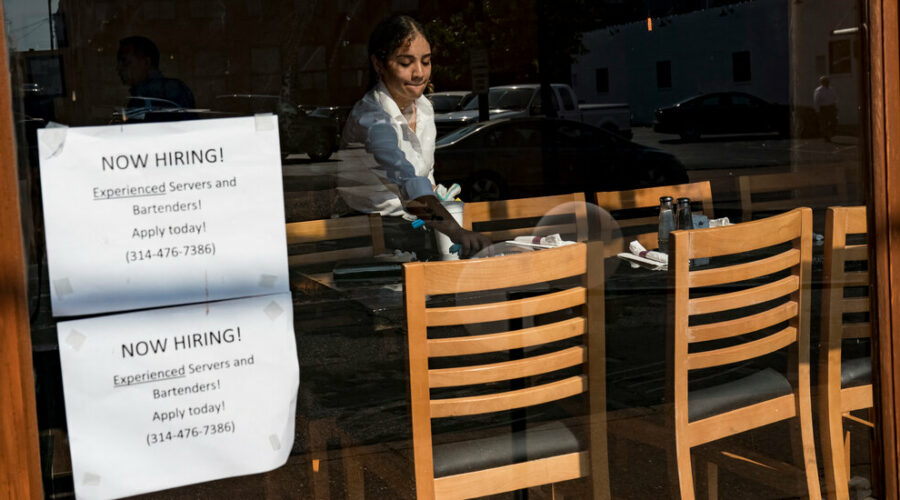 MARYLAND HEIGHTS, Mo. — By lunchtime, the representatives from the recruiting agency Express Employment Professionals decided to pack up and leave the job fair in the St. Louis suburb of Maryland Heights. Hardly anyone had shown up.

“We were hoping we would see prepandemic levels,” said Courtney Boyle, general manager of Express. After all, Missouri had just cut off federal unemployment benefits.

Business owners had complained that the assistance, as Gov. Mike Parson put it, “incentivized people to stay out of the work force.” He made Missouri one of the first four states to halt the federal aid; a total of 26 have said they will do so by next month. But in the St. Louis metropolitan area, where the jobless rate was 4.2 percent in May, those who expected the June 12 termination would unleash a flood of job seekers were disappointed.

Work-force development officials said they had seen virtually no uptick in applicants since the governor’s announcement, which ended a $300 weekly supplement to other benefits. And the online job site Indeed found that in states that have abandoned the federal benefits, clicks on job postings were below the national average.

The divide raises a fundamental question of what a healthy labor market looks like. Does it mean workers are on such a knife edge that they feel compelled to take the first job that comes along? Or is it one in which employers are the ones who have to scramble and feel pressured to raise wages and improve working conditions? Are the economy and the public better off when workers get to be choosy or when employers do?

“One way you might define normal is when employers and workers have the same idea of what an appropriate package looks like, and then the issue is matching up the people with the jobs,” said Katharine G. Abraham, an economist at the University of Maryland and a former commissioner at the Bureau of Labor Statistics.

“Clearly part of the problem now,” she said, “is that what employers and what workers think is out of whack.”

Why businesses are having such trouble hiring when 9.3 million people were unemployed in May is a puzzle that has generated lots of speculation, but little hard evidence. Many economists are skeptical that enhanced jobless benefits have played an outsize role in the hiring squeeze. They are more likely to point to child care and continuing health fears with less than half the population fully vaccinated. Nor should it be surprising that the nation’s road back from the harrowing limbo of the pandemic, in which millions of jobs vanished and more than 600,000 people have died, is bumpy.

In any case, the squeeze has given many job seekers the confidence that they can push for higher wages or wait until employers come around.

“They know how in demand they are,” said Angelic Hobart, a client service manager at American Staffing who occupied a table at the Maryland Heights job fair. “And I think that is being taken advantage of.” She said she had dozens of manufacturing, warehouse, sales, office and technology positions to fill. But public benefits have made people “very complacent,” she said. And sometimes “their pay expectations are way over what their skill level is.”

Many of the 34 employers and agencies at the job fair said they had raised wages by $1 an hour or more in recent months. And they shared a refrain: There were good jobs available but not enough good workers to fill them, those who were reliable and were willing to work hard.

That’s not the way Elodie Nohone saw it. “They’re offering $10, $12, $13,” said Ms. Nohone, who already earns $15 an hour as a visiting caregiver and was hoping to find a higher-paying opportunity. “There’s no point in being here.”

Her boyfriend, Damond Green, was making his way around the room. He holds two jobs, one at McDonald’s, where after seven years he earns $15 an hour, and another providing home health care. He and Ms. Nohone have a baby on the way, and Mr. Green is looking for one job with higher pay. “Two jobs stretch you thin,” he said.

“I want to do something where my work is appreciated,” he said, “and pay me decent.” His goal is to earn $50,000 a year, or about $25 an hour — roughly the median earnings of wage and salaried employees in the United States.

The labor market’s deeper problem, said Francine D. Blau, an economist at Cornell University, is the proliferation of low-paid jobs with few prospects for advancement and too little income to cover essential expenses like housing, food and health care.

The pandemic focused attention on many of these low-wage workers, who showed up to deliver food, clean hospital rooms and operate cash registers. “The pandemic put their lives at risk,” Ms. Blau said, “and we began to wonder if we are adequately remunerating a lot of the core labor we need to function as an economy and society.” 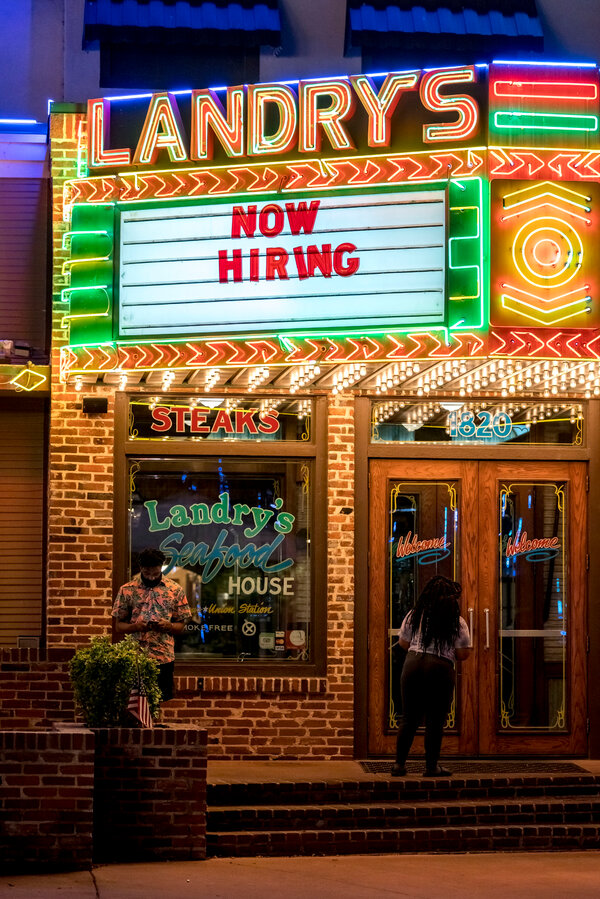 Terri Waters, who showed up at the job fair in search of a high-level marketing job, said she had a greater appreciation for the work done by many low-wage earners. Her marketing business dried up when the pandemic hit, and while job-hunting, she has been working at a natural-food store for $11.50 an hour.

“It’s really demanding work, you’re on your feet and by the end of the day you’re tired and sore,” Ms. Waters said. She understood why many job hunters were demanding more. “It’s not that people are being lazy,” she said. “They just want something better to go back to.”

Hundreds of jobs were being offered at the fair. A home health care agency wanted to hire aides for $10.30 an hour, the state’s minimum, to care for disabled children or mentally impaired adults. There were no benefits, and you would need a car to get from job to job. An ice rink, concert and entertainment center was looking for 80 people, paying $10.30 to $11.50 for customer service representatives and $13 for supervisors. But the jobs last just through the busy season, a few months at time, and the schedules, which often begin at 5 a.m., change from week to week.

In St. Louis, a single person needs to earn $14 an hour to cover basic expenses at a minimum standard, according to M.I.T.’s living-wage calculator. Add a child, and the needed wage rises just above $30. Two adults working with two children would each have to earn roughly $21 an hour.

The Biden administration has made clear that it seeks to tilt bargaining power toward workers. At the core of the president’s economic model, said Jared Bernstein, a member of the White House Council of Economic Advisers, “is the view that workers too often lack the necessary bargaining clout to claim their fair share of growth that they themselves are helping to produce.”

In recent decades, a declining share of the country’s income and its productivity gains has gone to workers. And for adults without a four-year college degree, the options are especially bleak. From 1974 to 2018, for example, real wages for men with only a high school diploma declined by 7 percent. For those without that diploma, wages fell by 18 percent.

For most of the last 40 years, less than full employment has tended to give employers the advantage. As it becomes harder to find qualified candidates, though, employers are often slow to adjust expectations.

Among job seekers interviewed at job fairs and employment agencies in the St. Louis area the week after the benefit cutoff, higher pay and better conditions were cited as their primary motivations. Of 40 people interviewed, only one — a longtime manager who had recently been laid off — had been receiving unemployment benefits. (The maximum weekly benefit in Missouri is $320.)

In St. Louis, the Element Hotel held a job fair to hire servers, bartenders and front-desk receptionists. Housekeepers were especially in demand. Janessa Corpuz, the general manager, had come in on a Sunday with her teenage daughter to do laundry because of the shortage.

The hotel, which is on a major bus line, raised its starting wage to $13.50 an hour, the second increase in two months. It also offers benefits and a $50-a-month transportation allowance. The number of applicants shot up — to 40 from a handful the previous month — after the second wage increase.

Shaleece Carter, 27, had a housekeeping job at another hotel, but it was near the airport, and her two-bus commute took two hours each way on a good day, compared with 25 minutes by car. One Saturday, when buses tend to be more irregular, she left her job at 4 p.m. but didn’t get home until 8 p.m. “That was it,” she said.

She got an offer on the spot and took it.

Justin Johnson, too, already had a job when he showed up at an Express Employment Professionals office. He was working at a pet feed company, earning $14 an hour to shovel piles of mud or oats. But that week temperatures topped 90 degrees every day and were heading past 100.

“The supervisor pushed people too hard,” Mr. Johnson said. He had to bring his own water, and if it was a slow day, he got sent home early, without pay for the lost hours.

He accepted an offer to begin work the next day at a bottle packaging plant, earning $16.50.

Amy Barber Terschluse, the owner of three Express franchises in St. Louis, handles mostly manufacturing, distribution and administrative jobs. Wages, hours and a short commute are what matter most to job seekers, she said, and few would work for less than $14 an hour.

Ms. Terschluse said she had also had to educate employers, who have gotten used to low wages and the ability to dictate schedules and other conditions.

In industries like hospitality and warehousing, annual turnover rates can surpass 100 percent, which can pare overall growth. Mary C. Daly, president of the Federal Reserve Bank of San Francisco, said good job matches between employers and workers produced the most productivity and engagement.

A dynamic labor market is one where the two sides negotiate over compensation, Ms. Daly said. If jobless benefits allow people to be a little more choosy because they are not destitute, she said, then “I, as an economist, predict that will be better for job matches and a better economy in the long run.”

27/06/2021 Business Comments Off on Where Jobless Benefits Were Cut, Jobs Are Still Hard to Fill
Markets