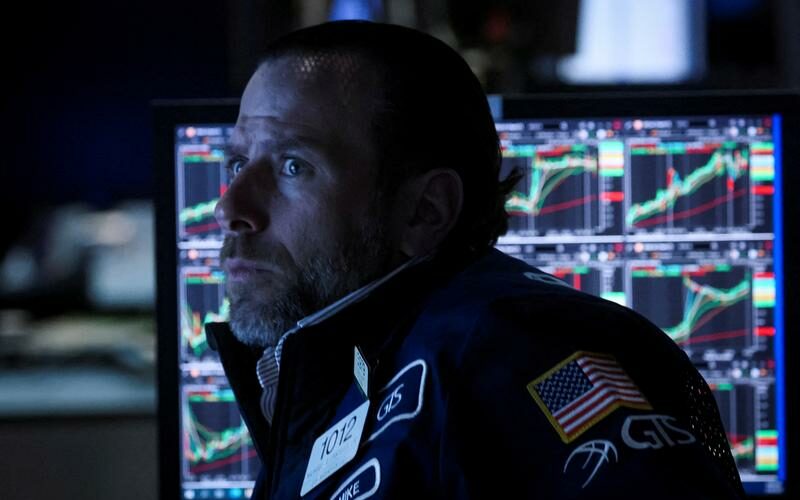 BENGALURU (Reuters) – The U.S. Treasury yield curve, already hammered into a flat line after one of its worst quarters in decades, is set to remain off its normal upwardly-sloping shape over the coming year, according to a Reuters poll of bond strategists.

The gap between two-year and 10-year U.S. Treasury yields has been inverted in the last several trading sessions. Such an inversion, when sustained, has been a reliable early warning of most U.S. recessions since the Second World War.

Forecasts for a flat to slightly inverted curve come despite expectations that the Federal Reserve will soon start reducing its bond holdings, letting securities accumulated during the pandemic roll off its near-$9 trillion balance sheet.

The March 29-April 5 poll of nearly 60 fixed-income strategists showed no sharp rise was imminently expected in 10-year notes, leaving the yield curve either flat or consistently at risk of further inversion over the coming year.

“If you asked me what’s going to be the dominant trend over the next phase, six to 12 months, it’s going to be the Fed pushing up the short rate expectations and a split between the behaviors of the yield curve that will drive further flattening,” said Robert Tipp, chief investment strategist and head of global bonds at PGIM Fixed Income.

He said two-year notes would keep following the fed funds rate up but alongside that, “the five-year and longer part of the curve keeping faith that at some point the secular fundamentals are going to become soft again.”

Just in the past few months, as inflation has soared to multi-decade highs, market expectations have surged from a series of steady 25 basis point Fed rate rises at each meeting this year to a succession of half-point moves.

That has led to concerns the Fed may end up overdoing its tightening campaign and put at risk the economic recovery from the pandemic, which has already shifted down a gear.

The benchmark 10-year bond yield was expected to trade around the current rate of 2.45% for the next three to six months before rising to 2.60% in a year, with the highest forecast at 3.25%.

If the median view is realized, that would be the flattest prediction and the first consensus forecast on a six-month horizon for a slight inversion in any Reuters poll for two decades.

Apart from a handful of respondents, most expected the spread to be less than 25 basis points, smaller than a single normal rate move by the Fed in a year when they are expected to deliver several increases twice that size.

However, many analysts argue the Fed, which now owns a significant percentage of the U.S. Treasury market through years of quantitative easing, has robbed it of its predictive powers.

“The yield curve is also distorted by QE since the Fed has bought a significant share of Treasuries, depressing term premiums and flattening the curve,” noted Priya Misra, head of global rates strategy at TD Securities.

“The market is likely pricing in balance sheet run-off later this year, but implementation details are still forthcoming. This makes it difficult to have much conviction about the extent to which QT is priced in.”

There was no clear consensus among analysts asked to describe the gap between current U.S. Treasury market pricing and impending quantitative tightening from the Fed. Very few regular respondents to the poll ventured a guess.