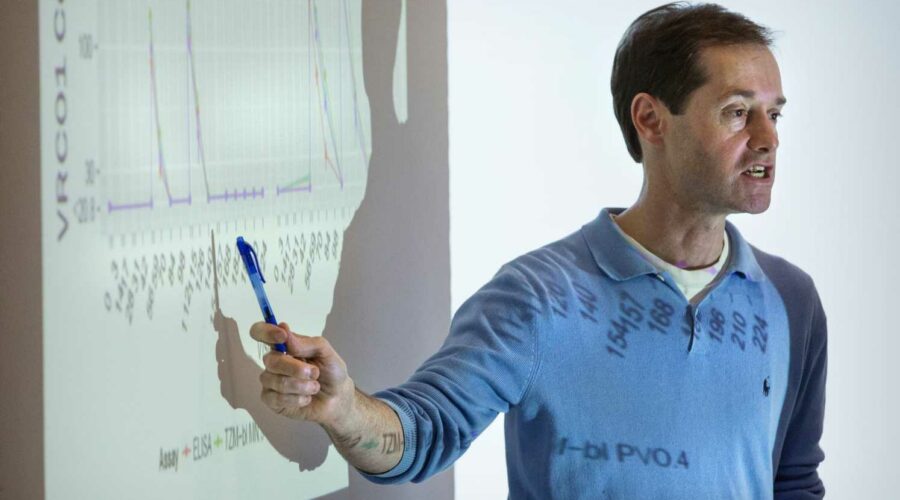 To prove their COVID-19 vaccines worked, companies had to enroll more than 100,000 participants in months-long clinical trials. Next time, Peter Gilbert wants such tests to require only a few hundred people and eight weeks’ time.

To get there, Gilbert and others have to figure out how much protection people need to avoid hospitalization and death from COVID-19, or even to prevent getting infected at all.

But 15 months after COVID-19 shut down most of the world, it’s still not clear what level of immune protection is enough.

“I haven’t seen people tossing around a number and I’m a little surprised by that. I would have thought we were further along by now,” said John Grabenstein, editor for the Immunization Action Coalition and former senior scientist and director for the U.S. Department of Defense military immunization program.

Gilbert and others are hunting for anumber that corresponds to immunity against COVID-19. Called a “correlate of protection,” it can indicate whether someone is safe from getting the disease.

Such a figure – measured by a specific type of immune antibodies in a person – could show whether they had developed enough immunity from a vaccine or natural infection. And it could quickly show if a vaccine was effective enough, without the need for large-scale, lengthy trials.

It’s something scientists the world over would find extremely useful as more vaccines, and possible boosters, are created.

“All you’d have to do is vaccinate people with a new vaccine, measure their antibodies and you’re done,” Gilbert said. “And you could do it with maybe 400 people instead of 40,000.”

Gilbert is a biostatistician at the Fred Hutchinson Cancer Research Center in Seattle who also leads the statistical center for the federal government’s COVID-19 Prevention Network.

As information comes in, the network will evaluate data on the antibody levels of people who’ve either recovered from COVID-19 or been vaccinated against it. Then researcherswill look at how many people go on to get COVID-19 a second time, known as breakthrough infections.

“It’s hard to give a timeline. Maybe June, maybe something else. It doesn’t depend entirely on us, it also depends on when the data sets are final,” Gilbert said.

Getting data takes time because the current vaccines are so good there aren’t many cases breaking through. The Centers for Disease Control and Prevention estimated out of more than 75 million fully vaccinated Americans, only 5,800 were re-infected.

Once enough of those people have been tested, their levels of antibodies can be compared with levels in people who didn’t get COVID-19 again.

The idea is to set a cutoff: above that number of antibodies, you’re protected; under it, you might not be.

“Unfortunately, reality is a bit more messy,” he said. “I think we’ll have some ideas about a range above which most people are protected and then below which most people will be unprotected, but it won’t be a clean cutoff.”

Gilbert and his team are prepared for that, but hopeful they’ll come up with a figure that’s instructive even if it’s not absolute.

“We can do it with an imperfect marker. Even if it means 70% protection but not 100% it will be useful,” Gilbert said. “We don’t want the perfect to be the enemy of the good.”

Even an approximate number would be useful for evaluating new vaccine candidates, said Moss.

“That’s where the real value of these correlates of protection is, because it’s just very expensive to do these large trials and it’s going to get harder to do in places where there are already high vaccine coverage (levels),” he said. “If you have a correlate of protection, it gives you a lot of confidence that you’ve got a viable vaccine candidate.”

It’s unclear if the Food and Drug Administration, which authorizes vaccines, would accept a correlate of protection rather than an efficacy study. But it’s been done with other vaccines.

Other reasons for the test

Another critical use for such a test would be to see if the vaccines’ effectiveness starts to wane over time. Instead of waiting to see if people vaccinated early begin to get sick, researchers could test their blood to see if their antibody levels were dropping.

That information could indicate whether booster shots might be necessary, and if so when.

“Antibody levels to one vaccine may or may not correlate to protection from another,” he said.

That’s especially true between vaccines made in different ways, he said. The mRNA vaccines, such as those by Pfizer-BioNTech and Moderna, may have different correlates than the one-dose shot from Johnson & Johnson, which is built on a harmless virus.

The antibody level required for protection also could be different for different people, as the immune system tends to weaken as people get older.

The final use for such a test would be to evaluate possible vaccines or boosters against emerging variants of the SARS-CoV-2 virus that causes COVID-19.

For now, the current vaccines appear to do a good job of protecting against most of the variants circulating globally. But if that changes and new vaccines are required, knowing the correlate of protection would allow testing to go much faster.

Correlates of protection tests will be different from the simple blood tests used now to determine whether a person has been exposed to COVID-19, said Dr. Grace Lee, a professor of pediatric infectious diseases at the Lucile Packard Children’s Hospital and Stanford University School of Medicine.

“I really don’t think we can rely on the antibody tests we have out there. We use them to diagnose prior infections but we really can’t use them to tell if you’re immune,” she said.

For now, the focus is on two specific types of antibodies, binding antibodies and neutralizing antibodies. It appears they may be good markers, though until all the data is in it won’t be certain.

And there’s always the chance no test will ever be definitive, said Dr. Paul Offit, director of the Vaccine Education Center at Children’s Hospital of Philadelphia.

“As a veteran of the vaccine world, let me just say that half the vaccines in the world don’t have correlates of immunity,” he said.

“Measles, mumps, rubella, they’re all highly successful vaccines but we don’t have a correlate of protection for them yet,” he said. “And look at smallpox – we eradicated it without ever having one for the virus.”

11/05/2021 Business Comments Off on What level of antibodies protect against COVID? Researchers are rushing to find out.
Markets