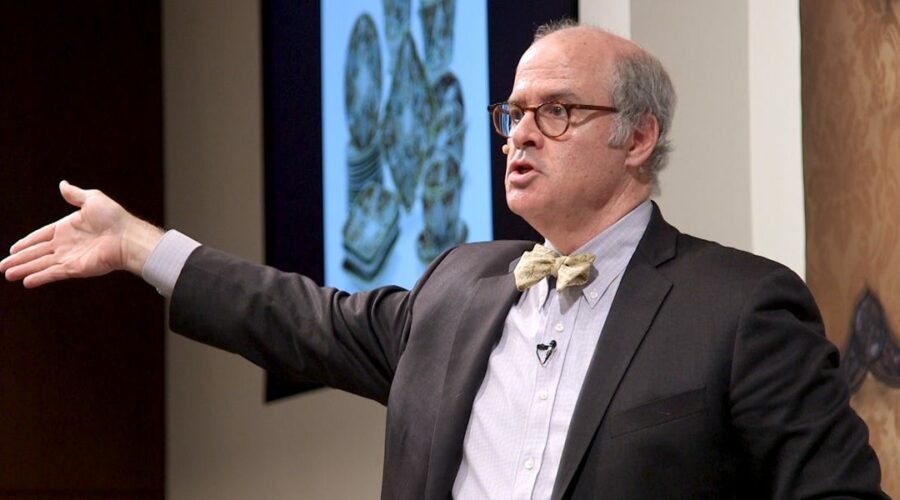 Following is a transcript of the video.

Narrator: This is John Hays, an auctioneer of nearly four decades.

Narrator: John works for Christie’s. Founded in London in 1766, it’s the largest auction house in the world and now has offices in 46 different countries. But in John’s posh world of art dealings, selling to the highest bidder sounds a bit different.

Narrator: John has worked more than 500 auctions in his 36-year career, bringing in about $1 billion in sales. He’s one of 56 auctioneers working worldwide for Christie’s. Together in 2018, they racked in $7 billion in sales. Some of the priciest sales have included a Harry Winston Pink Legacy ring that sold for $50.3 million, Picasso’s “Fillette à la corbeille fleurie” for $115 million, and in November 2017, Leonardo da Vinci’s “Salvator Mundi” sold for a record $450 million with fees.

Auctioneer: $400 million is the bid, and the piece is sold.

Narrator: But auctioneers at Christie’s aren’t just smooth talkers. They’re art experts, salespeople, and performers, landing multimillion-dollar bids with only a gavel and their voice.

Narrator: Becoming a Christie’s auctioneer is highly competitive. Every two years, Christie’s holds an auctioneering school. Up to 40 applicants are accepted, but only two or three will move on to private instruction afterwards.

Hays: I did the Christie’s program in London and got my master’s certificate there, and then I did every internship known to man in the art world. I knocked on Christie’s’ door 36 years ago, and they hired me in the American department in October of 1983.

Narrator: Most auctioneers have a background in art history and an area of expertise. John’s is 18 th-century American art. But since he sells everything from cars to jewelry to wine, he has to do his homework before he ever gets up on that auction block. We caught up with John at Christie’s in New York City before an auction of 18th-century European decorative arts.

Hays: We’re in Christie’s’ warehouse looking at a Roman micromosaic table. This object is one of the exciting pieces that’s coming up. Micromosaic tables are a thrill to me. I like to call them Roman holidays because here you see depictions of ancient Rome. The estimate is $50 to $80,000 dollars.

Narrator: The weeks leading up to an auction, John will visit the Christie’s warehouse to become familiar with each piece.

Narrator: While John’s doing his prep work, all the art is photographed and then set up in the gallery for prospective buyers to come check out the goods. Then on the morning of the auction, John comes here to the bids office to go over the auctioneer’s book. This is essentially his bible of auction secrets. It tells him a couple things: who has already put in bids for Christie’s, the estimated sale price for each item, if the seller has set a minimum sale price or reserve price, who will be bidding on the phone or in person, and the general interest in each lot. But even with all this preparation, when John steps out on that podium in a Christie’s-approved colorful bow tie, anything can happen.

Hays: An auctioneer puts himself or herself out there in a way that’s very public. It’s not for everybody because if something goes wrong, you have to have the coolness of a airplane pilot, you have to have the humor of a standup comedian, you also have to be serious, and this is serious stuff for many people who are depending upon the auctioneer to deliver a very high-level, a high-quality sale.

Narrator: First, a lot is introduced.

Hays: Right along to lot 55, ladies and gentlemen.

Narrator: A lot is an item or a group of items that are up for auction. Each lot has a number. John will read off that number and give a brief summary of the items.

Narrator: Then the first bid gets the ball rolling. Sometimes it’s on the auctioneer’s book from an absentee bidder.

Narrator: John states the price to beat, who’s holding the bid, and the price needed to steal the auction item.

Narrator: Typically, the price increments go up by 10%, but it’s up to John to alter those depending on energy in the room. Bids come in over the phone, online, or, of course, by paddles peeking up from the crowd in the sale room. Sometimes this process takes hours, and John says that a good auctioneer’s voice falls into a cadence.

Narrator: A speaking rhythm that comfortably carries through the entire auction. It’s on each auctioneer to develop their style and learn to find their pacing.

Hays: Christie’s does have a very unique style. We’re selling works of art. It’s perhaps a little bit pompous from time to time, but down deep it’s the same process as auctioneering cows at a farm or thoroughbreds. The nature of different auctions has acquired a different criteria of what the audience expects. So tobacco salesmen who will break into “and now we’ve got the third lot, and it’s the tobacco, and here we are ladies and gentlemen, it’s the farm,” you know, and you see that chant going through. If they heard a Christie’s art auctioneer, I think the audience would be shocked. Sometimes I’ll break into a farm auction just for the fun of it in an audience here in New York. It always is good for a laugh.

Narrator: Whether it’s a room full of tough Texans or New York’s art elite, John’s goal is to ethically bring in the highest possible price. So how does he nab those sky-high bids?

Narrator: For an hour and a half, John masterfully guides the vibe of the saleroom. His gestures command attention. His moments of silence hold the room in suspense. His shooting eye contact singles out the newest bidder. But just as easily, he can flip the energy, joking with the audience and addressing phone operators by name. Then when the moment feels right, a swift pound of the gavel rips through the space…

Narrator: Closing the sale. Just as quickly as it began, the auction is finished: 214 lots down, 185 items sold, $3.3 million in sales.

EDITOR’S NOTE: This video was originally published in May 2019.