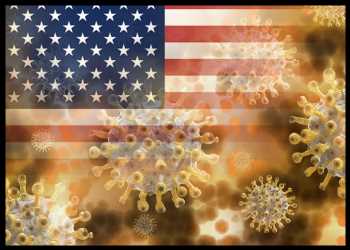 As Covid deaths in the United Sates continue to fall, and the country returning to an uptick in new infection cases, the highest daily case toll in six weeks was recorded on Monday.

While there is a 33 percent fall in Covid casualties in the last fortnight, 43 percent increase has been recorded in the number of cases in the same period, according to the latest New York Times tally.

With this, the total number of people infected with the virus in the country has risen to 80,686,455.

With 281 deaths reported on the same day, the total Covid casualties reached 988,912, according to the latest data from Johns Hopkins University.

New York reported the most number of cases – 10,365 – while Florida reported most casualties – 49.

Only 14,653 patients are remaining in the country’s hospitals for treatment for the viral disease. Hospital admissions reduced by 6 percent in two weeks.

There is also a concurrent reduction in the number of patients admitted in intensive care units – 19 percent within a fortnight.
I.C.U. admissions dropped to 1918.

80,244,093 people have so far recovered from the disease, the Worldometer tally shows.

As per the latest data published by the Centers for Disease Control and Prevention, 218,937,361 Americans, or 65.9 percent of the eligible population, have been administered both doses of Covid vaccine so far. This includes 89.8 percent of people above 65.

45.4 percent of the eligible population, or 99,505,898 people, have already received a booster dose that is recommended to provide additional protection from the killer virus.

1454 additional deaths were reported globally on Thursday, taking the total number of people who lost their lives due to the pandemic so far to 6,200,389.