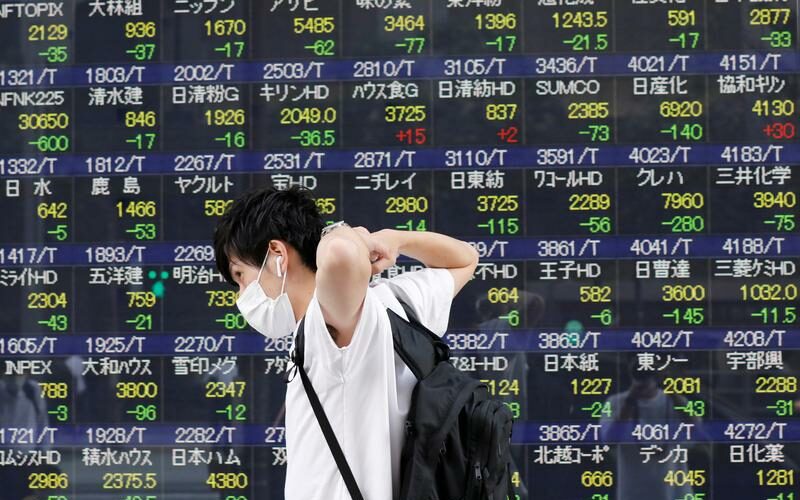 LONDON (Reuters) – World stock markets edged back towards recent record highs on Monday as upbeat economic data out of China eased concerns about a slowdown in the world’s No.2 economy, although falling mainland house prices tempered the optimism.

FILE PHOTO: A man wearing a protective mask, amid the COVID-19 outbreak, walks past an electronic board displaying Japan’s Nikkei index outside a brokerage in Tokyo, Japan, September 21, 2021. REUTERS/Kim Kyung-Hoon

Annual growth in retail sales and industrial output both beat forecasts, with the bounce in consumption a positive given pandemic restrictions.

But in a negative sign for the stressed housing market, China’s new home prices fell 0.2% month-on-month in October, the biggest decline since February 2015. And economists at CBA said there was a chance the Chinese central bank would cut bank reserve requirements (RRR) this week to support activity.

In Europe, investors picked up where they ended last week – sending the broad STOXX 600 index to a record high. U.S. equity futures were flat to a touch firmer.

Elsewhere, the United Nations climate conference in Scotland managed to hammer out a deal on emissions, but only by watering down a commitment to phase out coal.

BACK TO CBANK WATCH

Attention was expected to return to when major central banks will respond to the emergence of inflation pressures.

After rising sharply last week, on the back of stronger-than-expected U.S. inflation data, a calmer tone resurfaced in major bond markets.

In early European trade, the benchmark 10-year U.S. Treasury yield was 4 basis points lower on the day at 1.54%, having jumped 11 bps last week as markets positioned for early monetary tightening by the Federal Reserve.

BofA economist Ethan Harris suspects the market still has not priced in enough given the high starting level of inflation means rates need to rise more to reach neutral.

“If inflation stays high and comes in above the planned overshoot, the Fed will need to become much more hawkish and either accept a market correction or deliberately induce such a correction,” warned Harris.

Higher U.S. yields have combined with general risk aversion to benefit the dollar, which just boasted its best week in almost three months. Against a basket of currencies, the dollar was a touch lower at 95.088 but holding near its highest since July 2020.

U.S. retail sales data on Tuesday moved into focus for any signs that higher prices are taking a toll on consumer spending.

There are also doubts about whether firms have the pricing power to maintain margins in the face of rising costs.

Analysts at BofA noted 75% of U.S. companies had beaten earnings estimates in the latest reporting season but forecasts for the fourth quarter were only flat, breaking more than a year of rising expectations.

Gold meanwhile eased from a more than five-month peak hit last week, as investors assessed whether rising inflation would prompt a more aggressive response by central banks. It last traded at $1,862 per ounce, down 0.1% on the day.

Oil prices too started the week on the back foot given a strengthening dollar and speculation that President Joe Biden’s administration might release oil from the U.S. Strategic Petroleum Reserve.[O/R]