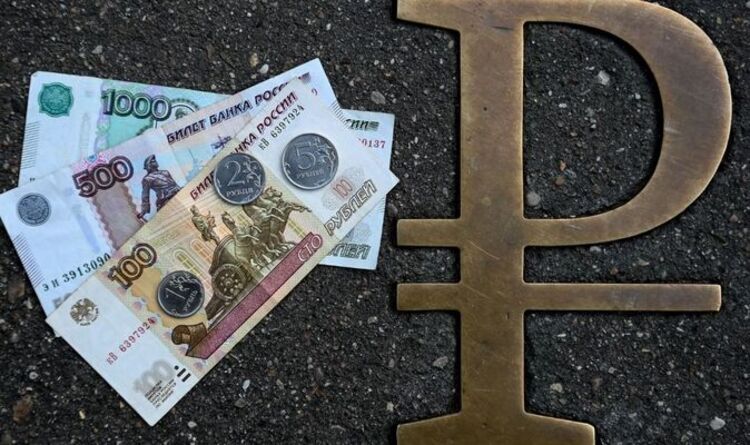 Russia has been hit by the West with some of the worst financial sanctions in modern times following the Kremlin’s invasion of Ukraine on Thursday.  On Saturday, the United States and European Union banned many of Russia’s major banks from using the Swift financial system used to settle payments and connect thousands of financial institutions across the globe.

Russians have been photographed in long queues at cash points after many of Russia’s central bank assets are rendered unusable due to the sanctions.

The Wall Street Journal reported on Sunday that Russia is on the brink of “financial crisis” as the ruble was quoted at 110 to 120 per dollar by Russian banks.

In response to the sanctions by the West, which aim to block billions of dollars of Russia’s gold and foreign exchange reserves, the Bank of Russia announced it would apply similar measures to foreign investors in Russian securities.

A document from the Central Bank instructs brokers from 7am Monday, to suspend the execution of all orders of clients both foreign legal entities and individuals for the sale of securities.

The document was signed by Philip Gabunia the Deputy Chairman of the Central Bank of the Russian Federation that states the choice was made “in connection with the current crisis situation in the financial market and in order to ensure the protection of the rights and legitimate interests of investors in the financial markets”.

Dmitry Medvedev, the Chairman of the Council of Defence of Russia, suggested on Saturday to “symmetrically respond” to the sanctions of the West that freeze money of Russian citizens and companies abroad.

He said: “Arrest of funds of foreigners and foreign companies in Russia on a country basis.

“Or maybe the nationalisation of the property of those persons who are registered in unfriendly jurisdictions.

“Such as the United States, EU states and a number of singing countries of the Anglo-Saxon world that will take part in this.

“Fortunately, the experience is rich, and we have a law on this topic.”

Andrei Klishas, the head of the Constitutional Committee of the Federation Council, said on Sunday that the sanctions from the West are a violation on the rights of Russian citizens and a tough response is necessary.

Mr Klishas believed that the retaliatory sanctions from Russia onto people from the US and the EU is entirely justified and legitimate.

The Central Bank has a reserve of approximately $630 billion and officials have warned people in Russia to remain calm and not cause a run on its banks.

A senior US official declared on Sunday that all ten of Russia’s largest financial establishments that hold nearly 80 percent of the banking sector’s total assets have been targeted by the US.

The official added that the US alongside its allies will unleash a task force aimed to “identify, hunt down and freeze the assets of sanctioned Russian companies and oligarchs, their yachts, their mansions, and any ill-gotten gains that we can find and freeze”.

28/02/2022 Business Comments Off on Ukraine invasion: Russian ruble at record low against the US dollar amid strict sanctions
Markets