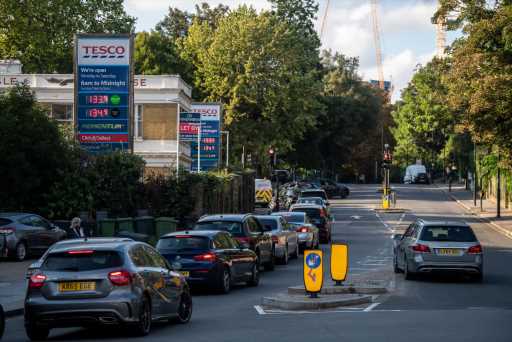 Britain could bring in the army to deliver gasoline after a weekend of panic buying left gas stations around the country without fuel.

Long queues of cars were have been seen outside U.K. gas stations in recent days, as drivers attempted to fill their vehicles following media reports of an impending shortage.

A major lack of truck drivers has meant deliveries of fuel and goods have recently fallen short in Britain.

Prime Minister Boris Johnson is said to be considering using military personnel to deliver fuel to gas stations, according to British media reports.

Business Minister Kwasi Kwarteng said on Sunday that he had exempted the fuel industry from U.K. competition laws, which he said would allow companies to "share information and prioritize the delivery of fuel to areas most in need."

Meanwhile, thousands of truck drivers are set to be granted temporary U.K. visas in the run-up to Christmas, in an attempt to limit supply disruption ahead of the festive period.

A spokesperson for the U.K. government was not immediately available to comment on the situation when contacted by CNBC.

Gordon Balmer, executive director of the U.K.'s Petrol Retailers Association, told LBC News on Monday that temporary visas would ease supply constraints to an extent, but added that it was not enough. He said he hoped the government was indeed considering measures like drafting in the army.

"A lot of people have filled up over the weekend, many people only fill up once a month," he said. "That might give us some respite to start to replenish stocks over the next few days."

It comes as the PRA told Sky News on Monday that some larger gasoline retailers were reporting that 50% to 90% of their pumps in English cities were running dry.

Oil giant BP said in a statement on Friday that it had temporarily closed some of its gas stations due to shortages of unleaded and diesel petrol.

"These have been caused by some delays in the supply chain which has been impacted by the industry-wide driver shortages across the U.K. and there are many actions being taken to address the issue," a spokesperson said.

"We continue to work with our haulier supplier to minimize any future disruption and to ensure efficient and effective deliveries to serve our customers. We are prioritizing deliveries to sites with largest demand and seeking to minimize the duration of stock outs."