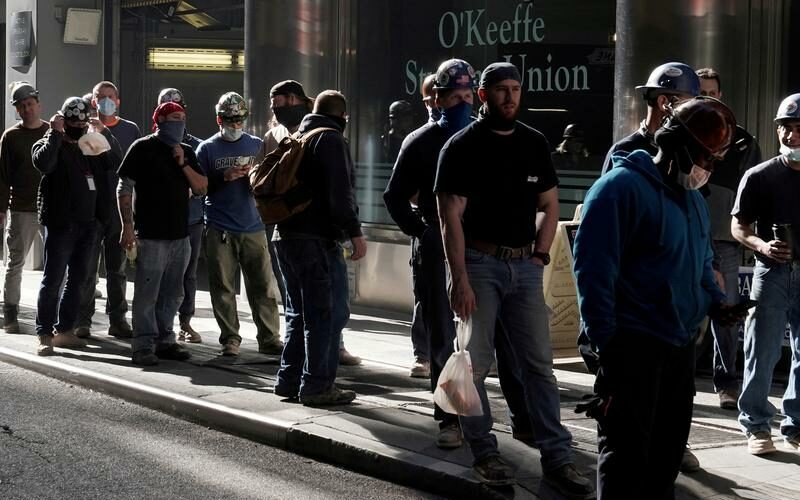 The Labor Department’s closely watched employment report on Friday, which showed a plunge in temporary help jobs – a harbinger for future hiring – as well as decreases in manufacturing and retail employment, could sharpen criticism of generous unemployment benefits.

The enhanced jobless benefits, including a government-funded $300 weekly supplement, pay more than most minimum-wage jobs. The unemployment benefits were extended as part of a massive $1.9 trillion COVID-19 pandemic relief package approved in March.

Nonfarm payrolls increased by only 266,000 jobs last month. Data for March was revised down to show 770,000 jobs added instead of 916,000 as previously reported. Economists polled by Reuters had forecast payrolls would advance by 978,000 jobs.

That left employment 8.2 million jobs below its peak in February 2020. The jobs report will probably do little to change expectations that the economy entered the second quarter with strong momentum and was on track for its best performance this year in almost four decades.

“Many will view the poor returns from last month as confirmation that enhanced unemployment benefits are curtailing labor supply,” said Curt Long, chief economist at the National Association of Federally-Insured Credit Unions.

U.S. stocks opened mixed. The dollar was weaker against a basket of currencies. Prices of longer-dated U.S. Treasuries fell.

Twelve months ago, the economy purged a record 20.679 million jobs as it reeled from mandatory closures of nonessential businesses to slow the first wave of COVID-19 infections. New claims for unemployment benefits have dropped below 500,000 for the first time since the pandemic started.

Americans over the age of 16 are now eligible to receive a COVID-19 vaccine, leading states like New York, New Jersey and Connecticut to lift most of their coronavirus capacity restrictions on businesses.

But the resulting burst in demand, which contributed to the economy’s 6.4% annualized growth pace in the first quarter, the second-fastest since the third quarter of 2003, has triggered shortages of labor and raw materials.

From manufacturing to restaurants, employers are scrambling for workers. A range of factors, including parents still at home to care for children, coronavirus-related retirements and generous unemployment checks, are blamed for the labor shortages. The moderate pace of hiring could last at least until September when the enhanced unemployment benefits run out.

For a graphic on U.S. labor market by sector:

Leisure and hospitality gained 331,000 jobs in April, with hiring at restaurants and bars accounting for more than half of the increase. Government employment picked up as school districts hired more teachers following the resumption of in-person learning in many states.

In the transportation and warehousing industry, employment for couriers and messengers fell by 77,000.

Still, the labor market remains supported by very accommodative fiscal and monetary policy. President Joe Biden has proposed to spend another $4 trillion on education and child care, middle- and low-income families, infrastructure and jobs. The Federal Reserve has signaled it intends to leave its benchmark overnight interest rate near zero and continue to pump money into the economy through bond purchases for a while.

The unemployment rate rose to 6.1% in April from 6.0% in March. The jobless rate has been understated by people misclassifying themselves as being “employed but absent from work.” Millions of Americans remain out of work and many have permanently lost jobs because of the pandemic.