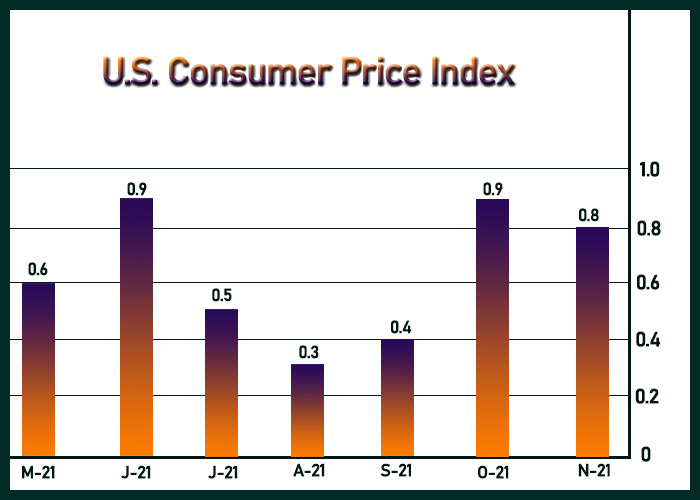 Consumer prices in the U.S. increased at the fastest annual rate in nearly 40 years in the month of November, according to a report released by the Labor Department on Friday.

The report showed the annual rate of growth in consumer prices accelerated to 6.8 percent in November from 6.2 percent in October, reflecting the biggest jump since June of 1982.

Energy prices have skyrocketed by 33.3 percent over the last year, while prices for food have spiked by 6.1 percent.

Core consumer prices, which exclude food and energy prices, were up by 4.9 percent compared to the same month a year ago, showing the biggest annual increase since June of 1991.

The faster annual growth came as consumer prices climbed by 0.8 percent in November following a 0.9 percent advance in October. Economists had expected consumer prices to increase by 0.7 percent.

The continued price growth was partly due to another surge in energy prices, which spiked by 3.5 percent in November after soaring by 4.8 percent in October.

Food prices also advanced by 0.7 percent in November, reflecting broad-based increases in prices for both food at home and away from home.

The Labor Department said the shelter index increased by 0.5 percent, as the indexes for rent and owners’ equivalent rent both rose by 0.4 percent.

“The biggest problem for the Fed is the mounting evidence of a strong pick-up in cyclical price pressures,” said Paul Ashworth, Chief US Economist at Capital Economics. “The upshot is that, although we think headline inflation has now peaked, it will decline only gradually over the first half of next year.”

He added, “Crucially, because of that building cyclical pressure we expect core inflation to remain above the Fed’s 2% target for a prolonged period.”

Next Tuesday, the Labor Department is scheduled to release a separate report on producer prices in the month of November.