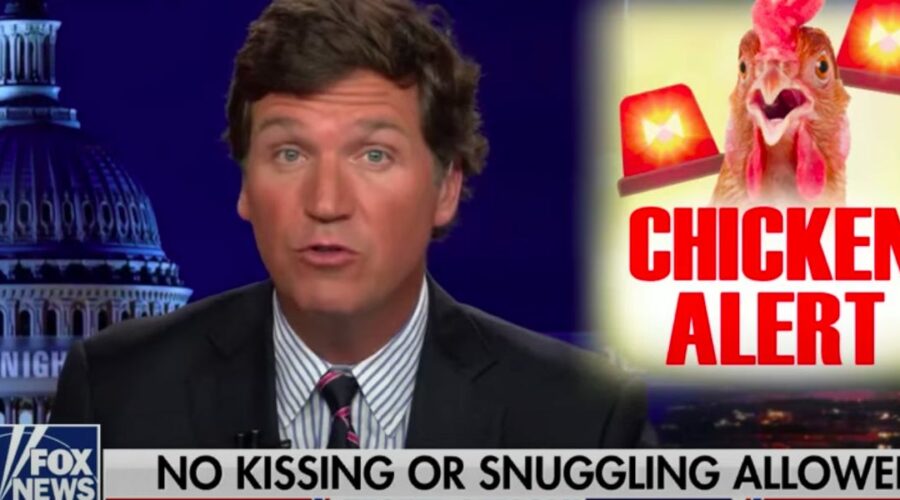 The Fox News host invited Tiara Soleim, a “poultry enthusiast” and former contestant on “The Bachelor,” onto his show Friday night to discuss her love for cuddling chickens and her distaste for the Centers of Disease Control and Prevention.

The interview came just one day after the CDC announced that a dangerous salmonella outbreak had sickened people in 43 states, and that this outbreak had been linked to backyard poultry.

“Like all obedient Americans we’re pretty dialed into what the CDC has to say about our lives,” Carlson said in his segment. “For once it has nothing to do with the coronavirus. This guidance have to do with chickens.”

The agency cautioned people: “Don’t kiss or snuggle backyard poultry, and don’t eat or drink around them,” adding that such behavior could enable Salmonella germs to get into your mouth.

“Now that raises the question, who are these chicken touchers out there that the CDC is concerned about?” Carlson said before introducing his special guest.

Soleim, who owns 30 chickens, wasn’t pleased with the CDC’s warning.

“I’m not a huge fan of it because I’ve been handling chickens since I was about 4 years old. And I’ve been kissing them, snuggling them, shoving my face in them and I’m fine. People around me are fine. And I don’t see a problem with it,” she told Carlson.

She even brought a rooster named Bad Boy Halo onto the show with her.

‘Just looking for something else to control’ 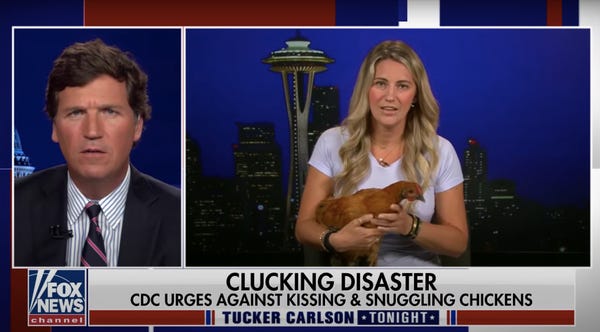 During the show, which labeled the CDC guidance a “clucking disaster,” Carlson asked his guest if she felt targeted.

“It feels like you’ve been singled out by the CDC for criticism. How does that feel?” he said.

Soleim was quick to retort that the CDC was “just looking for something else to control.”

At least 163 people have fallen ill and 34 people have been hospitalized so far during the salmonella outbreak, according to the agency. It warned Americans that chicken and ducks “can carry Salmonella germs even if they look healthy and clean.” 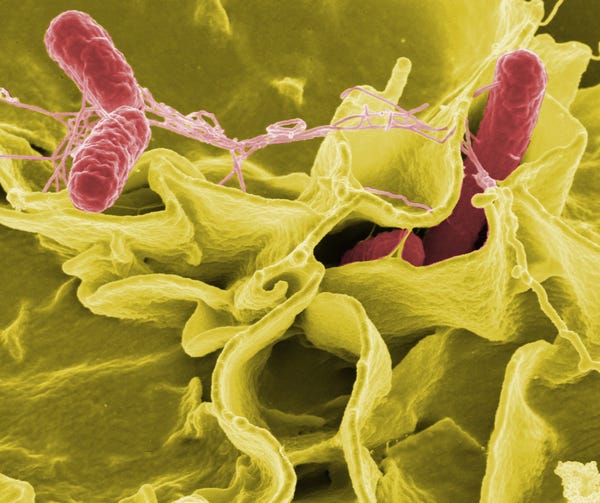 Salmonella is a bacteria that causes an illness called salmonellosis, which gives people diarrhea, fever, and stomach cramps.

It lives in the intestines of people and animals, according to the CDC. People tend to get infected after they’ve eaten contaminated food or touched infected animals’ or those animals’ poop.