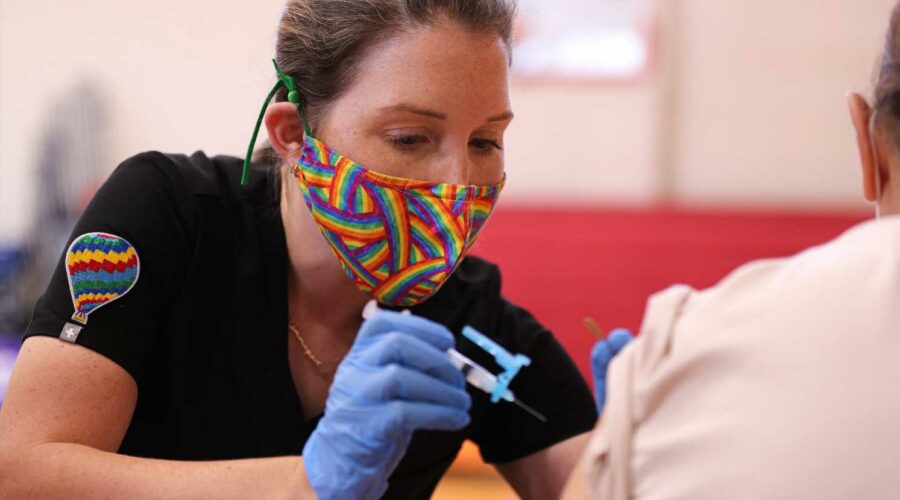 Next Sunday marks the Fourth of July, President Joe Biden’s target date of getting 70% of adult Americans at least partially vaccinated for COVID-19

But the White House last week said that wasn’t predicted to happen. Getting at least one shot into the arms of 70% of all American adults will take a few more weeks, said Jeff Zients, the White House coronavirus response coordinator.

But with Transportation Security Association screening numbers trending upward, including its highest recorded number since March 7, 2020 reported Friday, neither the faulty prediction nor variants is not predicted to deter holiday revelry.

The spread of the delta variant of COVID-19 into the U.S. is becoming a concern for medical experts because of pockets of people in the nation who have yet to receive the vaccine.

Dr. Jayne Morgan, executive director of Piedmont Healthcare’s Coronavirus Task Force in Atlanta, told CNN that since children under 12 are still not eligible for the vaccine, it makes it even more important for those who are eligible to get vaccinated and reduce the transmission of the delta variant.

“Those mutations have the ability to continue to learn, to become smarter, and eventually evade the immunization status of the rest of us,” Morgan said.

Also in the news:

►The delta variant now makes up 14.5% of cases in California, according to the state’s most recent Department of Health statistics. As of June 19, it accounts for more than 20% of cases in the U.S.

►Malaysia’s leader says the country will indefinitely extend a near-total lockdown that’s been in place for a month as coronavirus infections remain high.

►U.K. Health Secretary Matt Hancock, who has led the country’s response to the coronavirus, resigned Saturday, a day after apologizing for breaching social distancing rules with an aide with whom he was allegedly having an affair.

►Even though 40% of Americans said they preferred to work from home full time last month, major companies across the country are encouraging or demanding that their staff return to the office by Labor Day.

📈 Today’s numbers: The U.S. has more than 33.6 million confirmed COVID-19 cases and at least 603,000 deaths, according to Johns Hopkins University data. The global totals: More than 181 million cases and more than 3.92 million deaths. More than 153 million Americans have been fully vaccinated — nearly 46% of the population, according to the CDC.

📘 What we’re reading: Although COVID-19 vaccines work incredibly well for the vast majority of people, roughly 10 million Americans whose immune systems are compromised because of medication or disease may not be well protected. Read the full story.

Keep refreshing this page for the latest updates. Want more? Sign up for our Coronavirus Watch newsletter for updates to your inbox and join our Facebook group.

The virus that causes COVID-19 did not originate at the Wuhan seafood market, confirms a new study of deleted gene sequences from the virus’s earliest days.

The sequences had been posted to a website run by the National Institutes of Health, but were removed for unknown reasons.

Jesse Bloom, who studies viral evolution at the Fred Hutchinson Cancer Research Center in Seattle, does not suggest an answer to the question of whether the SARS-CoV-2 virus jumped directly from animals to people or was accidentally leaked from a research lab in Wuhan, China, in his new report, which has not yet been peer-reviewed.

But by studying how the viral genes mutate over time, researchers like Bloom can reconstruct their history, figuring out which cases came first and how the virus changed as it moved through the population.

“These sequences are informative for understanding early SARS-CoV-2 spread in Wuhan,” Bloom said. “They’re not transformative, but they fill in some really important gaps.”

Bloom knows that the deletion of the sequences will raise suspicions in the public, but he says there are many reasons a researcher might ask for material to be taken offline, including the fact that the week the study was posted, the Chinese government instituted a requirement that it review all scientific information related to SARS-CoV-2 before publication. Read more.

India raises concern of a new mutation of the delta variant

A mutation from the delta variant, called delta plus, is rising across a dozen countries.

Officials in India asked Maharashtra, Kerala and Madhya Pradesh, three states in the country with the most cases, to increase screenings for the strain. Indian labs identifying and tracking the spread of COVID variant identified three main concerning characteristics of delta plus: Increased transmissibility; an increased attack on lung cells; and possible reduction in monoclonal antibody response, or possible resistance to vaccines and immunity.

Experts say that there is still more research needed to fully confirm if it’s more daunting than the original delta strain.

“I would keep calm,” Dr. Jeremy Kamil, a virologist at the Louisiana State University Health Sciences Center, told BBC News. “I don’t think India or anyone else in the world has released or accumulated enough data to distinguish the risk from the so-called delta plus as being more dangerous or concerning than the original delta variant.”