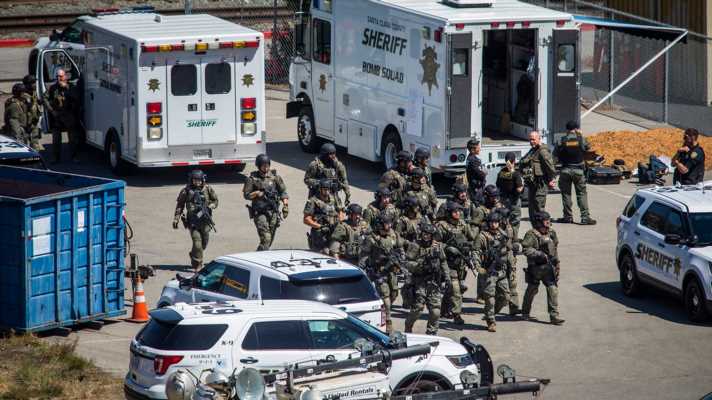 While gunfire was still ongoing during the deadly shooting at a Northern California light rail yard, law enforcement officers first on scene ran into the building, taking their “life in their hands” to stop the massacre, the county sheriff said.

“When our deputies went through the door, initially he was still firing rounds. When our deputy saw him, he took his life,” Santa Clara County Sheriff Laurie Smith told reporters Wednesday. Deputies “were going through hallways saying, ‘Sheriff’s office!’ He knew at that time that his time for firing shots was over.”

Nine people were killed and the gunman died by suicide in the shooting rampage Wednesday at the Santa Clara Valley Transportation Authority light rail hub in San Jose.

“They’re my true heroes,” Smith said. “There was active shooting going on at the time. There were victims shot in two separate buildings. But they responded, they responded the way that they should, they took their life in their hands and I know for sure that when the suspect knew that law enforcement was there, he took his own life.”

The shooting happened across the street from the sheriff’s office headquarters, said spokesperson Russell Davis.  When multiple reports of shots fired came in, the county’s active shooter protocol was activated, calling on multiple law enforcement agencies and fire departments nearby.

While officers were on the scene quickly, Davis said they did not exchange gunfire with the suspect, who shot himself as he saw law enforcement.

“They did not wait,” Davis said. “They immediately went into the scene and rendered first aid and rescued victims out of the building as fast as they can.”

He added: “With the training we’ve been doing with our active shooter protocol, this could have been a lot worse of a situation.”

Since the 1999 shooting at Columbine High School in Colorado, police departments across the country have largely changed procedure and protocol in how to respond to active shooter incidents. Rather than secure the area and wait for backup, law enforcement first on the scene is generally trained to engage immediately.

“These things happen so quickly that the first officer can’t wait,” Chuck Wexler, executive director of the Police Executive Research Forum, told USA TODAY in March in the wake of the shooting at a grocery store in Boulder, Colorado. “The officer has to engage. It’s highly risky, but unfortunately, in situations like this, seconds matter.”

More on police response to active shooters: How law enforcement strategy has evolved over the years

How the San Jose shooting unfolded

Security camera footage from a neighbor shows the gunman leaving his home at 5:39 a.m. with a duffel bag, according to the San Jose Mercury News.

At 6:29 a.m., San Jose Fire Department received a call about a blaze at a lumber business about 5 miles away from the rail yard. It is unclear whether this fire is connected to the shooting.

Two minutes later, at 6:36 a.m., San Jose Fire Department responded to a call of a fire at the home of the man later identified as the suspected shooter. The fire department said damage was “heavy; the structure is currently uninhabitable.”

The Santa Clara County Sheriff’s Office tweeted at 7:12 a.m. deputies were responding to the scene of the shooting.

At a 10:30 a.m. news conference, Davis said eight victims plus the shooter were dead. He also announced a bomb dog detected explosive material as law enforcement was clearing the scene. According to the Mercury News, bomb squads also entered the suspect’s home at 10:48 a.m.

What we know about the victims: He tried to warn his co-workers, then he was shot: Loved ones mourn victims of shooting at San Jose rail yard

27/05/2021 Business Comments Off on ‘They did not wait’: Officers rushed into San Jose rail yard as gunshots were still ringing out, authorities say
Markets