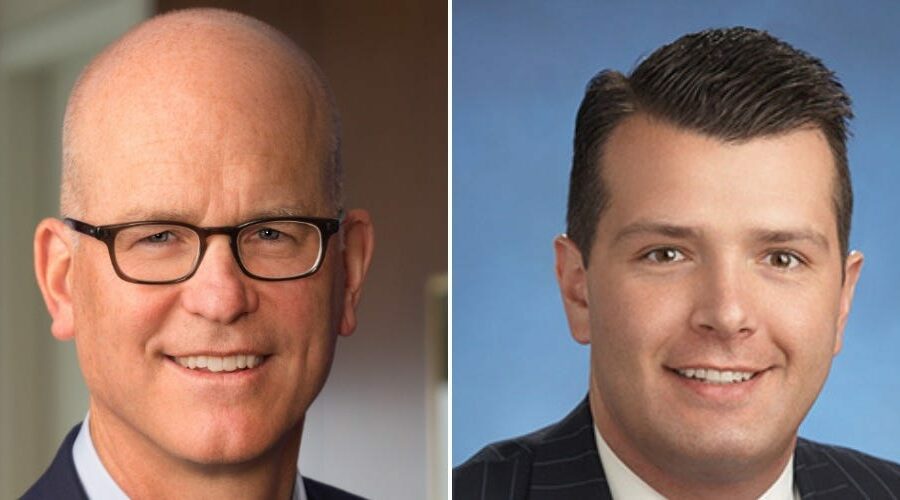 The asset management industry is struggling. Passive investing approaches are taking over, driving down fees for hundreds of smaller active managers and pushing them to merge with similarly weakened rivals.

Larger managers like Morgan Stanley and JPMorgan are looking to get even bigger in order to compete.

And yet one of the world's largest, Goldman Sachs, is betting that it can make more incremental moves and still maintain a leadership role in the industry.

Last year, for example, Goldman created a team that's helping corporate and public pension funds navigate portfolio construction questions, like how to prepare to liquify funds for a private investment.

The idea is that the team will support the Goldman salespeople who call on pension funds, and the expectation is that if Goldman can help clients get more comfortable with their liquidity needs they'll have more funds to put into other investments, according to Luke Sarsfield and Craig Russell, co-heads of GSAM's client business.

"We thought it was really important to have a dedicated team of advisory experts who were able to think about what are the key questions that are being asked and, you know, how do we respond to them in the best and most thoughtful way," Sarsfield said. "That team is having a real impact on accelerating the force and flow of our coverage folks' relationships and interactions with their clients."

A move that reflects the industry's direction

The effort is part of a larger trend taking shape across the asset management industry, which has long organized itself around selling individual products like mutual funds or exchange-traded funds. Increasingly, asset managers are trying to offer something more, a consultatory and solutions-oriented relationship with clients.

Russell and Sarsfield told Business Insider in an exclusive interview they see Goldman fitting in well with that trend, leaning on its scale and the broad swath of services that they offer — including "thought leadership" — as benefits in the fast-changing industry.

"There will always be parts buyers," Sarsfield said. "I don't mean to understate that, but increasingly I think you're seeing our clients go from procuring a part or a piece to really procuring a solution."

Sarsfield and Russell are GSAM's senior most leaders, responsible for bringing the business' investment products and services to outside institutions and financial advisors, and overseeing those relationships.

Through September, GSAM, which now sits within Goldman's larger asset management division, managed some $1.8 trillion in assets under supervision as of September 30, 2020.

Read more: The asset manager of the future looks like a consultant. Here's how firms like BlackRock, PIMCO, and Invesco are preparing for it.

Most asset managers like GSAM are evolving beyond traditional money management, introducing new digital services, advice, and tailored investments to set themselves apart — and eke out bigger profits.

That shift reached a boiling point last year with a flurry of tie-ups like Morgan Stanley and E-Trade, Franklin Resources and Legg Mason, and Macquarie buying up parts of Waddell & Reed.

Goldman, too, has been acquisitive over the last few years, though at a much smaller scale. Last month the bank closed its purchase of the Perth Mint Physical Gold ETF. It bought Rocaton Investment Advisors in 2018, part of a series of small bolt-on acquisitions conducted by the firm's asset management business over the last decade.

M&A activity in the US investment management industry was valued at roughly $28 billion in 2020, the highest overall deal value in the sector since $29 billion in 2000, according to data from data and analytics provider Dealogic.

Much of that activity has been mid-sized managers who have been been "squeezed" in a low-fee world, said Sarsfield, who once ran Goldman's investment banking team charged with giving advice to financial institutions like asset managers.

"If you're stuck, it's not a pleasant or comfortable place to be," he said.  "I think the good news for us is we feel like we have the requisite scale, breadth, and capability."

For those who can survive, analysts expect asset levels and wealth to continued rising.

But fees are widely expected to keep falling, setting up ongoing challenges for money managers. Firms' net revenues as a share of assets under management have steadily declined since 2014, from 29 basis points that year to 25 basis points in 2019, according to a May 2020 analysis by Boston Consulting Group. Overall revenue growth had been "insufficient to offset fee compression across the industry," BCG found.

GSAM's team of advisory experts will help counter some of that with its focus on providing "thought leadership around key questions" to state and corporate pension-plan clients in the Americas, Sarsfield said.

Some of those clients, Sarsfield said, have asked the team how they should position their funds around those events. Hold enough cash to fulfill the commitments and earn paltry returns with rates at ultra-low levels, or take a different approach?

"It's a very interesting question. And these guys are able to really do some robust analytics around that," he said, adding that it's not "in the vein of selling a product," but rather providing advice to pension clients who want exposure to private markets.

The group is led by Kareem Raymond, a veteran leader at Goldman, and the firm has staffed it with existing employees, including some from its investment research arm.

Sarsfield and Russell also expect demand to continue to rise for their outsourced chief investment officer (OCIO) services, which Sarsfield said "really started in the US," but has grown by "leaps and bounds internationally," as well as growth in offering separately managed accounts (SMAs) to clients.

The OCIO business handles some $100 billion in assets, a pool that has grown by about 20% in the last five years, a spokesperson said.

With SMAs and the increasingly popular direct-indexing capabilities they are associated with, asset and wealth managers have recently seized on clients' growing preference for customizable and tax-efficient investment strategies, making an years-old investing vehicle new again.

Changes inside the asset management arm

The firm last fall said it created a new standalone consumer division to take effect January 1 and be led by former strategy chief Stephanie Cohen and wealth management head Tucker York. As part of its divisional shakeup, the bank eliminated the former Consumer and Investment Management Division, which had housed GSAM. GSAM and the merchant-banking business are now part of a new asset management division.

Read more: Goldman Sachs just shook up its divisions to create a new consumer and wealth-management arm that will be run by Stephanie Cohen and Tucker York

And Sheila Patel, GSAM's chair and a member of CEO David Solomon's management committee, stepped down from her role at the beginning of the year to become an advisory director, according to a memo seen by Business Insider.

Overall, asset management reported a strong quarter last fall. The business generated $2.77 billion in revenue during the third quarter, just over a quarter of Goldman's overall revenue of $10.78 billion. The firm is set to report fourth-quarter earnings results later this month.

07/01/2021 Business Comments Off on The co-heads of Goldman Sachs' $1.8 trillion money manager reveal their playbook for standing out in an industry that's getting hammered
World News