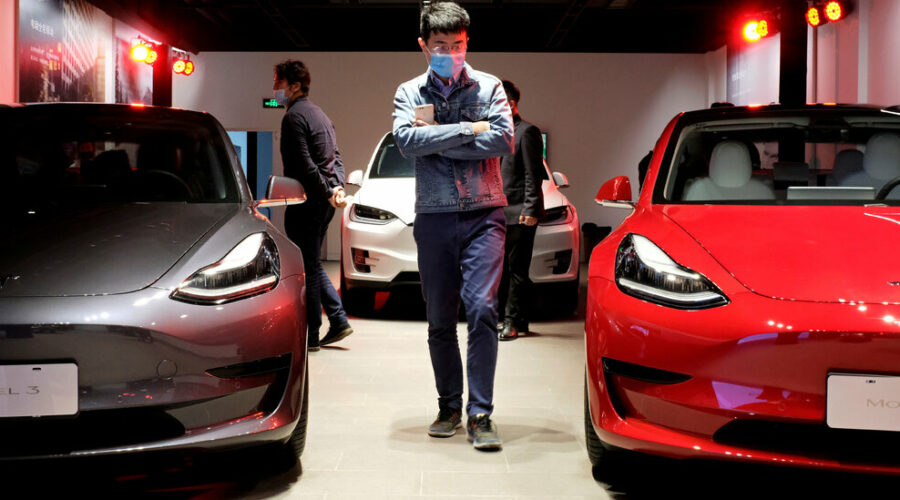 Tesla’s share price fell by more than 10 percent Friday morning, adding to steady losses over the last month that have wiped out about a third of the automaker’s market value amid concerns about flagging sales.

Around 12:30, the stock was trading at $580, down from its opening price of $621 at the end of trading on Thursday. The current price leaves Tesla, which sells electric cars, batteries and solar panels, with a market value of about $540 billion. A month ago, Tesla stock was priced above $870 a share and its market value was more than $800 million as many investors bet that the company would revolutionize the auto and energy industries, dealing fatal blows to older and more established companies.

The sharp drop comes as many investors have pulled back from riskier stocks and investments in anticipation of rising interest rates. In addition, auto analysts and sales data have suggested that Tesla is facing tougher competition in the United States and China. Analysts at Morgan Stanley said on Wednesday that Tesla lost market share last month in the United States to Ford Motor’s new electric model, the Mustang Mach E.

The China Passenger Car Association also said Tesla sold 15,484 locally made cars in January. That’s higher than the same period a year ago, but lower than December’s total of 23,804. Tesla’s sales in China often fluctuate when the company exports batches of cars made at a Shanghai plant to other markets such as Australia and Europe.

“Tesla has really benefited from that halo of, ‘It doesn’t really matter how many vehicles we sell this year or how much cash we burn,’” said David Whiston, a Morningstar analyst. “It’s all been, ‘Where are we going to be five or 10 years from now?’ But lately there’s been a bit more turbulence.”

But Mr. Whiston added that Tesla share price was incredibly volatile and it could be hard to deduce clear trends from watching it move up and down. “The way it fluctuates, I wouldn’t be surprised if it’s back above $700 next week,” he said.

Institutional investors may have been selling some of their stakes in Tesla in recent weeks, but the regulatory forms that would reveal such sales won’t come out for weeks. Some big shareholders slashed their Tesla holdings last year. Baillie Gifford, a Scottish investment manager, and a long time Tesla shareholder, cut its position to just over 27 million shares at the end of last year, down from nearly 59 million shares at the end of June.

Despite the recent decline, Tesla shares are still up around 300 percent over the past 12 months. And the market value is more than the combined market capitalization of Toyota Motor, Volkswagen, Daimler, General Motors and Ford — companies that sell many more cars than Tesla.

05/03/2021 Business Comments Off on Tesla’s once surging stock price is tumbling.
Markets