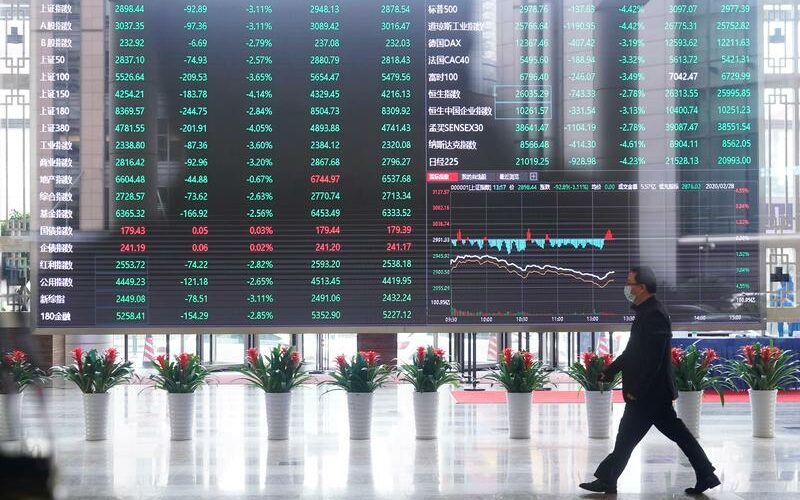 MILAN (Reuters) – World stocks ticked up to new peaks on Monday on bets interest rates will remain low and the economy continue its recovery, while oil prices jumped after a cyber attack on a U.S. pipeline operator unnerved markets.

FILE PHOTO: A man wearing a face mask is seen inside the Shanghai Stock Exchange building, as the country is hit by a novel coronavirus outbreak, at the Pudong financial district in Shanghai, China February 28, 2020. REUTERS/Aly Song

MSCI’s gauge of stocks across the globe hit a fresh record high and was up 0.1% by 0740 GMT, driven by gains across Asian markets overnight and a steady open in Europe.

U.S. nonfarm payrolls data on Friday showed jobs growth slowed much more than expected in April in a shock release that gave equities a lift but put downward pressure on the dollar and U.S. Treasury yields.

“A statistical fluke and/or a temporary pause in labor market demand is the likeliest culprit for this report. However, the Federal Reserve cannot afford to adjust policy without concrete proof of a stronger labor market recovery,” said Natixis economist Troy Ludtka.

On Friday the Dow Jones Industrial Average and the S&P 500 rose to record closing highs as the disappointing data on the U.S. jobs market eased concerns about a spike in consumer prices.

In recent weeks, some investors had been placing bets that a robust U.S. economic recovery from the coronavirus pandemic would force the Federal Reserve to tighten policy earlier than the central bank has outlined.

However, the weak nonfarm payrolls report caused a rapid reversal in some of these trades, which rippled through stocks, bonds, and major currencies.

U.S. President Joe Biden said after the report that the figures showed the economy was not at risk of overheating and underscored how vital his administration’s economic actions are.

“In the end, it is the best of all possible worlds for equities: robust economy, strong earnings, but no monetary policy tightening and more fiscal spending coming,” said Giuseppe Sersale, fund manager at Anthilia in Milan.

The focus now shifts to U.S. consumer price data due on Wednesday, which will help investors determine whether they need to scale back their inflation expectations even further.

The dollar index against a basket of six major currencies edged up 0.17% to 90.301 but was just above its lowest since Feb. 25 hit earlier in the session.

The British pound jumped to the highest in more than two months against the greenback, but traders said worries about Scottish independence could curb sterling’s gains. It was last up 0.5% at $1.406.

The yield on benchmark 10-year Treasury notes added around 1 basis point to 1.597% after having plunged to a two-month low of 1.469% on Friday.

Oil prices rose after a cyber attack shut down a U.S. pipeline operator that provides nearly half of the U.S. east coast’s fuel supply. [O/R]

The White House was working closely with top U.S. fuel pipeline operator Colonial Pipeline on Sunday to help it recover from a ransomware attack that forced the company to shut its main fuel lines.

Copper prices touched record highs on hopes for improved demand amid tightening supply. Three-month copper on the London Metal Exchange rose to $10,747.50 a tonne earlier in the session before easing back slightly.