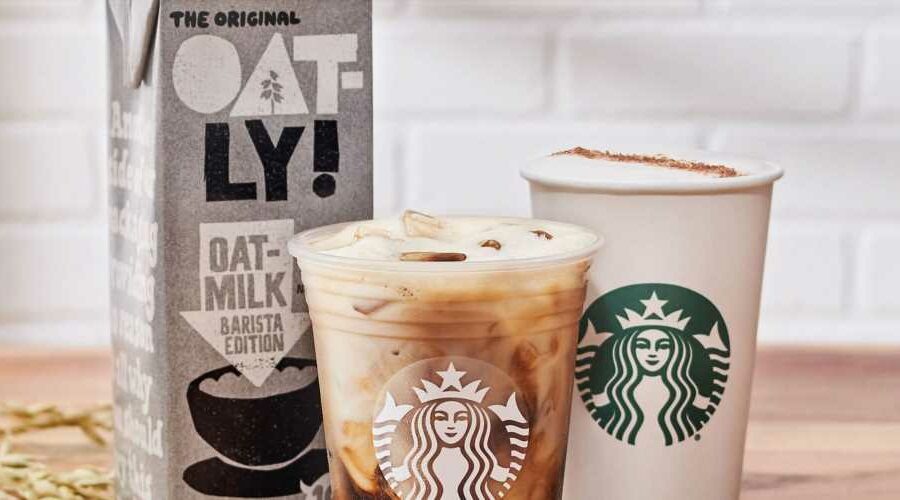 The calendar still says it's winter, but Starbucks is getting ready for spring with its latest menu additions.

On Monday morning, the coffee chain announced that it will be unveiling a series of new drinks starting Tuesday, March 2. Starbucks will release oat milk, a nut-free milk alternative, in stores nationwide on the same day, so it's no surprise that the ingredient is featured prominently in the spring menu.

As part of the lineup, a Honey Oatmilk Latte will be available nationwide for the first time. Starbucks is also betting on the rising popularity of cold coffee and has added a new line of cold espresso drinks to the permanent menu. The Iced Shaken Espresso will come in two dairy-free flavors: Brown Sugar Oatmilk and Chocolate Almondmilk.

The oat milk drink will feature a mix of brown sugar and cinnamon, and the almond milk variety will blend cocoa and notes of malt. Starbucks Blonde espresso will be the base for both hand-shaken drinks.

For those craving something a bit more savory, the chain is also adding a new food item to its permanent menu: the Chickpea Bites & Avocado Protein Box, a plant-based, protein-filled portable box that's filled with chickpea bites, snap peas, mini carrots, a dried cranberry and nut mix, and avocado spread.

To celebrate the spring menu, the chain is offering Starbucks Rewards members a free drink coupon (redeemable March 10-12) when they use the Starbucks app to order ahead a grande or larger handcrafted drink.

The rise of oat milk

This spring marks the first time that oat milk has been available at Starbucks stores nationwide. The coffee chain first introduced the milk alternative to its menu in 1,300 stores in January 2020. Before then, the chain had been offering oat milk in European markets since January 2018 and at select Starbucks Reserve locations since March 2019.

In December 2020, the coffee chain announced that it would be rolling out oat milk in all stores across the country in spring 2021.

In recent months, Starbucks has been leaning into plant-based drinks and milk alternatives. In January, the chain welcomed the new year with a new Pistachio Latte and a Honey Almondmilk Cold Brew.

Related:Oat milk is now the second most popular plant-based milk on the market.

Starbucks partnered with Oatly, a Swedish oat milk producer, to bring the plant-based dairy alternative to its menu. According to a Starbucks press release, oat milk is the fourth non-dairy milk alternative the company has made available to its U.S. customers. The others include soy milk, coconut milk and almond milk.