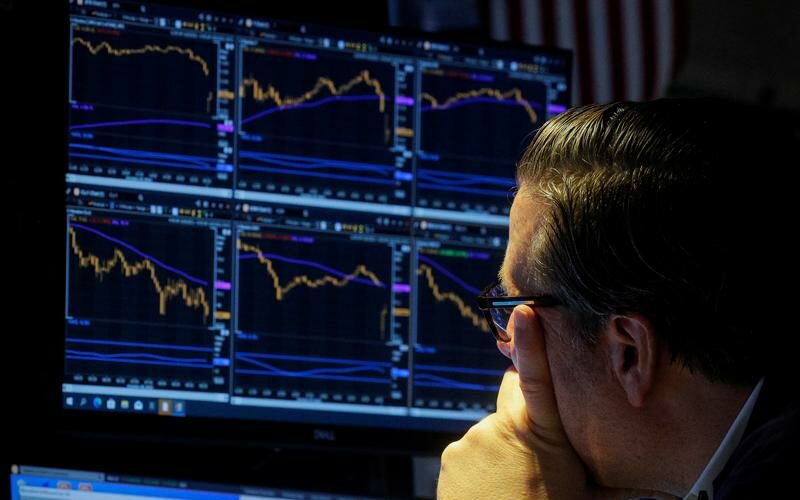 A specialist trader works inside a booth on the floor of the New York Stock Exchange (NYSE) in New York City, U.S., October 6, 2021. REUTERS/Brendan McDermid

Wall Street’s three main indexes were mixed for much of the session before losing ground toward the end. All three indexes posted weekly gains.

Both companies were among the biggest drags on the S&P 500 and Nasdaq.

Real estate and utilities were the poorest performers among 11 S&P 500 sector indexes, down 1.1% and 0.7%, respectively.

The S&P 500 energy sector index jumped 3.1%, with oil up more than 4% on the week as a global energy crunch has boosted prices to their highest since 2014.

Chevron and Exxon Mobil rallied more than 2% and were among the companies giving the S&P 500 the greatest lift.

The Labor Department’s nonfarm payrolls report showed the U.S. economy in September created the fewest jobs in nine months as hiring dropped at schools and some businesses were short of workers. The unemployment rate fell to 4.8% from 5.2% in August and average hourly earnings rose 0.6%, which was more than expected.

“I think that the Federal Reserve made it very clear that they don’t need a blockbuster jobs report to taper in November,” said Kathy Lien, Managing Director at BK Asset Management in New York. “I think the Fed remains on track.”

Futures on the federal funds rate priced in a quarter-point tightening by the Federal Reserve by November or December next year.

Third-quarter reporting season kicks off next week, with JPMorgan Chase and other big banks among the first to post results. Investors are focused on global supply chain problems and labor shortages.

Analysts on average expect S&P 500 earnings per share for the quarter to be up almost 30%, according to Refinitiv.

“I think it’s going to be a dicey earnings season,” warned Liz Young, head of investment strategy at SoFi in New York. “If supply-chain issues are driving up costs, a company with strong pricing power can pass through those rising costs. But you can’t pass through a labor shortage if you can’t find workers to hire.”

Declining issues outnumbered advancing ones on the NYSE by a 1.24-to-1 ratio; on Nasdaq, a 1.52-to-1 ratio favored decliners.

Volume on U.S. exchanges was 9.2 billion shares, compared with the 11 billion average over the last 20 trading days.