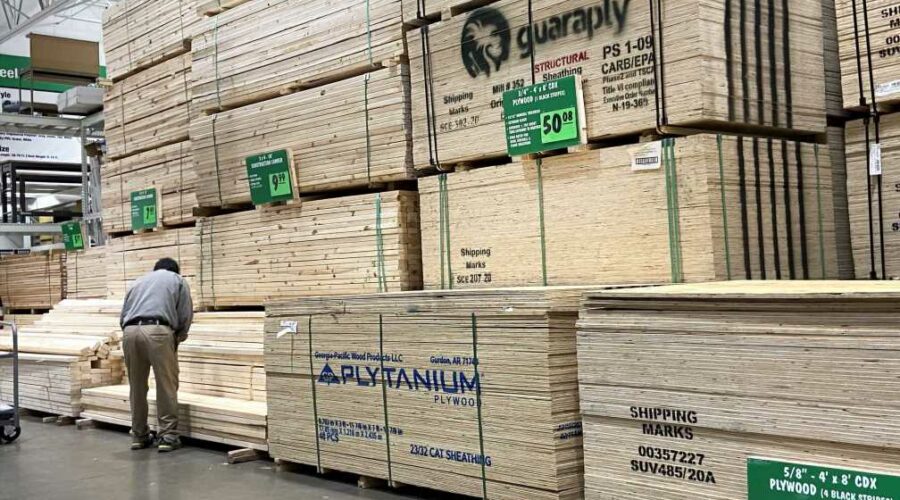 As the housing market gets leaner, potential buyers are turning in record numbers to new construction, but several factors are making those homes pricier than ever before.

First is a major shift in the market's composition due to the record shortage of existing homes available. One in four homes for sale are now newly built, the highest share ever. Historically new homes make up about one in 10, but fierce buyer competition is behind that shift. Prices for both new and existing homes are now at record highs.

But it is not just competition fueling new home prices, it is the cost of what goes into the home. Material and land prices are surging.

Lumber prices seem to set a new record almost daily, now up 67% since the start of this year and up 340% from a year ago, according to Random Lengths, a wood products industry tracking firm. And lumber doesn't just go into framing a house. Those added costs hit cabinets, doors, windows, flooring.

Lumber prices are skyrocketing for various reasons beyond just high demand from both homebuilders and remodelers. Lumber tariffs had prices already rising a year ago, but then when the pandemic hit, production shut down. The expectation was that housing demand would dry up for a long time. But instead, after a brief pause, it came roaring back. Homebuilders were caught off guard, as were lumber producers.

"Clearly, increasing the cost of imports via tariffs does not help the situation," said Robert Dietz, chief economist for the National Association of Home Builders. "We need to do everything that we can to increase domestic supply, including producing more domestic lumber, as well as resolving the trade dispute. It is matter of housing affordability."

Some builders have said they are slowing production in the face of exorbitant costs, but single-family housing starts were up 41% in March year-over-year, according to the U.S. Census. Builders are clearly trying to ramp up production as fast as they can to meet soaring demand.

"We just have no supply in either the new home or resale market today," said Sheryl Palmer, CEO of homebuilder Taylor Morrison in an interview on CNBC's Worldwide Exchange.

Palmer said she has seen demand rise across all geographies and all segments of the market, particularly first-time buyers and 55+ buyers. Builder costs, however, are out of control, she said.

"We have seen, over the last four or five months, what I have never seen in my career before, is lumber to move to the level it has," said Palmer. "We are very anxious to see full capacity back domestically. I think if we can get the full supply on, we can get lumber to level out a bit."

But it's not just lumber. Gypsum, which is drywall, prices are up nearly 7% from a year ago.

Steel mill product prices are at a new record high, up nearly 18% in March year-over-year. This is beams, sheet metal products and wiring.

The price of copper also set a new record high this month. It is now up 27% year-to-date.

And then there is land. The price per single lot is up 11% so far this year compared with the same period last year, because demand is so high and supply is low. New lot supply is down 20% from a year ago, according to Zonda, a real estate data and advisory firm.

The inventory is tightest in San Diego, Baltimore, and San Francisco. Nashville is also now seeing one of the biggest drops in supply. Lot supply in 90% of the top markets tracked by Zonda are currently considered significantly undersupplied.

"There's a literal land grab going on as builders are scooping up lots to better match housing supply with demand," said Ali Wolf, chief economist with Zonda. "The lot supply shortage is real, and it is causing prices to rise and builders to move further into the suburbs."

Wolf adds that the new housing market is underperforming its full potential, and will continue to as long as the lot shortage persists. Add higher commodity prices to that equation, and the new home market will continue to struggle at a time when it should be reaping huge rewards from hungry buyers.

30/04/2021 Business Comments Off on Soaring lumber prices add $36,000 to the cost of a new home, and a fierce land grab is only making it worse
Markets