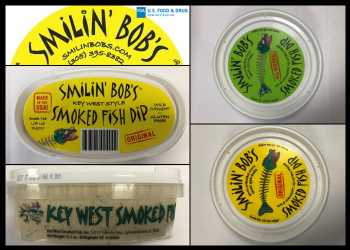 Smilin’ Bob’s is recalling certain smoked fish dip products due to possible contamination with Listeria monocytogenes, according to the U.S. Food and Drug Administration.

The company used the recalled smoked fish from Banner Smoked Fish in its recalled products. The products were distributed to retailers in various states, including FL, GA, AL, SC, TN, NC, and VA.

The recall involves a total of 1,261 cases of the products, which includes 878 cases of Smilin’ Bob’s Key West Style Original Smoked Fish Dip. The product comes in 8 ounce round plastic container with best by dates of August 3 and August 10, which were distributed on May 24 and June 4.

Further, 335 cases of Smilin’ Bob’s Key West Style Original Smoked Fish Dip that comes in 15.5 ounce plastic container were called back. The product, with best by dates of August 3 and August 10, were distributed on May 25, 27, and 31.

The company also called back 48 cases of Smilin’ Bob’s All Natural Smoked Fish Dip that comes in 8 ounce round plastic container. It has best by date of August 10, and were distributed on June 4.

It was in last week that Brooklyn, New York-based Banner Smoked Fish recalled certain smoked fish products such as Salmon, Lox, and Trout, among others, in all package sizes, all package types and all lots for the potential Listeria risks.

Listeria monocytogenes is an organism that can cause serious, and sometimes fatal infections in young children, frail or elderly people, and others with weakened immune systems.

Healthy individuals may suffer only short-term symptoms such as high fever, severe headache, stiffness, nausea, abdominal pain and diarrhea, while it can cause miscarriages and stillbirths among pregnant women.

However, the company has not received any reports of illnesses to date in connection with the recalled items.

Smilin’ Bob’s is working with distributors and retailers to quarantine and recover any impacted product remaining on store shelves.

Consumers are urged to return the recalled products to the place of purchase for a full refund.