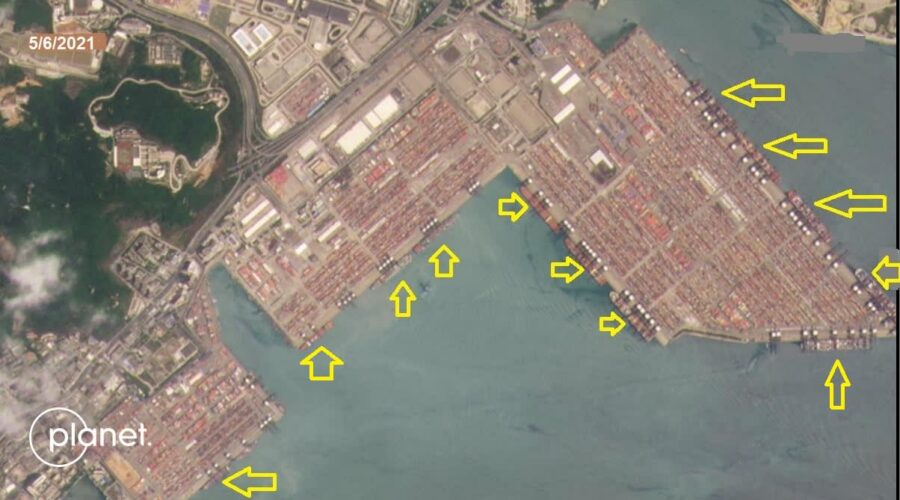 The backlog of containers stacking up at Port of Yantian, the world's fourth-largest container port, can be seen from space as a Covid-19 outbreak in the south China city of Shenzen where the port is located has delayed operations.

There are approximately 160,000 40-foot containers or the equivalent of 300,000 TEUs (20-foot equivalent units) waiting to be exported, according to logistics companies with operating knowledge of the port.

The port was partially shut down from May 25 to May 27 after five crew members aboard a container ship docked at the port tested positive for Covid. Additional positive cases of port workers and in the surrounding area had carriers like Maersk characterizing the situation in its customer alerts as deteriorating.

The south Chinese port terminal serves 100 ships every week and is a pivotal export location for both the United States and Europe. In 2020, the Port of Yantian processed 13.3 million containers otherwise known as TEUs. But operations were still stalled as of last week with few ships seen docking at the port in satellite photos provided to CNBC by Planet Labs.

SEKO Logistics, which has operations in Asia, said the port is slowly re-opening, but the container congestion will take a while to unwind.

"Port operations are getting better and assumed to be closer to 50% to 60% percent productivity," said Akhil Nair, VP Global Carrier Management & Ocean Strategy at SEKO Logistics-Hong Kong explained in an email. "However, there is a long waiting list of ships that must perform both discharge and load operations. It will take a while. If all the extra containers are forty feet in length, you are looking at roughly 160,000 physical containers that need to be exported."

Mirko Woitzik, senior manager of EMEA for Intelligence Solutions of Everstream Analytics, which also has ground logistics in the area, told CNBC they see the same amount of containers waiting to be loaded onto vessels.

"There are not a lot of vessels calling Yantian now," Woltzik said. "While you do have the occasional vessels calling to the port, it depends on how long they stay and if they pick up the export."

He said they could just be dropping off the imports. "The port productivity is increasing but will take time to work through. This just adds to the days vessels have to wait to get into port," he said.

Over 90% of the world's electronics are exported out of the Port of Yantian. According to FreightWaves SONAR data, the largest-named consignee for the port is TV maker TTE Technologies. Other major exporters include Tesla, William-Sonoma, QVC, JoAnn Fabrics, Home Depot, Walmart, Amazon, IKEA, Walgreens and Hasbro.

"This is really what's on everyone's mind," Woitzik said. "The carriers are canceling most of the port calls to Yantian until at least the middle of July." That means a lot of exports won't leave the Chinese port until then, he said.

While some exporters may move their goods to other ports, not all will follow suit, Woitzik said. Peak holiday shipping season starts in August, he said.

"That's when companies start to ship their products to get them on the shelves in time for the holidays," he said. "This backlog only adds to the volumes of containers waiting in line to be transported."

"These products have thinner margins and are likely to get delayed," said Woitzik. "Walmart and Home Depot can be impacted and see shortages because they have logistics bases around that port. Basically, the shipping lines are taking the highest-bidding shippers. Usually, those bidders are the high-value electronic consumer goods."

Earlier this week, Home Depot's President and Chief Operating Officer Ted Decker told CNBC, the company has chartered its own vessel to start transporting products in mid-July in an effort to avoid maritime congestion that might hold up goods in time for the holidays.

Both the U.S. West Coast and the Chinese ports have seen record container volumes during the pandemic. The latest slowdown at Yantian and the diversion of vessels away from there to the ports of Hong Kong, Shekou and Nansha have created a Tsunami of congestion. Infections have also been reported at the Guangzhou port terminal of Nansha and in Shenzhen port. The combination of resurging Covid outbreaks and the additional container surges are slowing down the movement of containers at the Port of Nansha.

"The ripple effects of this slowdown in Yantian will be felt in about four week's time in the United States," Woitzik said.  "Depending on how quickly the West Coast ports can clear the current vessel backlog, the congestion will only get even worse when the Yantian exports start arriving."