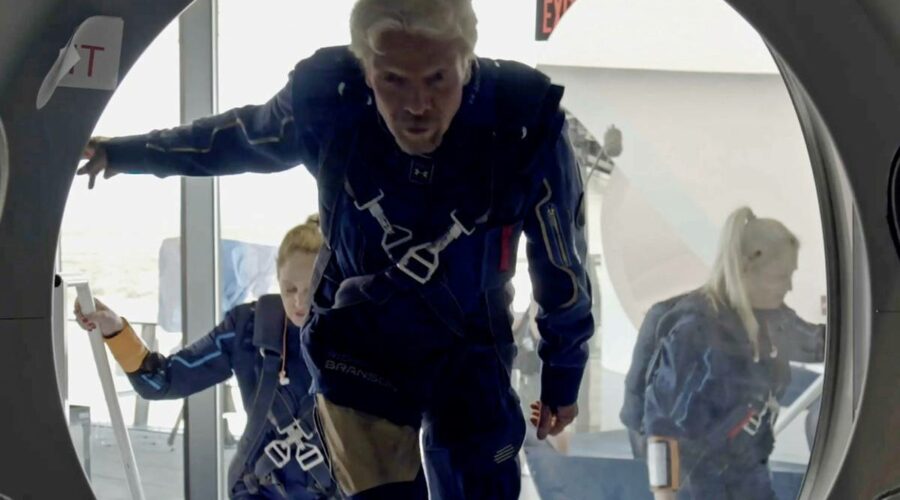 Watch the rocket launch in the livestream below:

Bilionnaire Sir Richard Branson’s Unity 22 mission is preparing to launch into space, with the Virgin Galactic boss on board.

Originally scheduled for 1am NZT, the launch has now been delayed 90 minutes due to weather conditions.

Virgin Galactic will become the first rocket company to launch the boss when Richard Branson straps into one of his sleek, shiny space planes, in what is already a true space race, as the Virgin billionaire rushes to beat Amazon’s Jeff Bezos as the first rich man to leave the planet.

Branson assigned himself to Virgin Galactic’s first full-scale crew, jumping ahead of Blue Origin’s Jeff Bezos, an even richer rocketeer looking to launch himself into space.

Bezos’ liftoff is set for July 20 from West Texas.

Branson’s space mission will begin at about 1am NZT today, weather permitting.

The livestreaming event will be hosted by comedian Stephen Colbert.

Grammy-nominated singer Khalid will perform his new song, “New Normal”, at the landing site after Branson’s return to Earth.

Just a week shy of turning 71, the London-born founder of the Virgin Group says he’s “not apprehensive at all and it is the dream of a lifetime” to ride into space.

The longtime fitness fanatic put in extra effort to prepare for the brief up-and-down flight. “I’m in my 70s now so you either let yourself go or you get fit and enjoy life.”

His wife, children and grandchildren will be there as he climbs aboard the rocket plane that’s attached to a dual-fuselage aircraft for takeoff.

During the three to four minutes of weightlessness, “I’ll be looking back at our beautiful Earth and taking it all in and realise that only 500 other people have done this”. Closer to 600, actually, but still a relatively small number. Upon landing, he’ll celebrate with “a great, great grin on my face”.

Who else is flying

Two pilots are needed to fly the rocket plane from the time it’s released from the mothership to shoot into space until it glides down to a runway.

The self-described tie-loathing adventurer and troublemaker will join five company employees for Sunday’s test flight from New Mexico’s southern desert — the company’s fourth trip to the edge of space.

It will be the third trip to space for chief pilot David Mackay, a Scottish-born test pilot for the Royal Air Force who went on to fly for Branson’s Virgin Atlantic, and the second for chief flight instructor Michael Masucci.

After reaching nearly 50,000 feet (15,000m), the plane will be released and drop for a moment or two before its rocket motor ignites to send the craft on a steep climb toward space, exceeding 3Gs, or three times the force of Earth’s gravity. The motor will shut off once the craft reaches space — a maximum altitude of about 55 miles (88km) is anticipated — enveloping the ship in silence as everyone but the pilots unbuckle, float and gaze out the 17 windows at Earth and the black void of space.

After a few minutes of weightlessness, the occupants will strap back in as the plane reorients itself for entry — folding up its wings, then folding them back down in unique technique known as feathering. The rocket plane will glide back, Nasa space shuttle style, to conclude about 15 minutes of free flight.

Years in the making

Founded in 2004, Virgin Galactic got its start when Branson teamed up with aircraft designer Burt Rutan to provide the necessary spaceship technology. A 2007 rocket motor test in California’s Mojave Desert left three workers dead and three more injured. Then in 2014 the rocket plane Enterprise — named after the “Star Trek” ship — broke apart during a test flight, killing one pilot and seriously injuring the other.

Unity, the replacement ship named by the late physicist Stephen Hawking, began flight tests in 2016. It made its first trip to the edge of space with two pilots in 2018 and the second in 2019, both times from Mojave. The operations moved to New Mexico’s Spaceport America, from where the plane soared on May 22 to achieve the company’s third spaceflight.

After Branson’s launch, Virgin Galactic plans two more test flights this summer and fall before inviting paying customers on board.

The next one will include more company employees, and the last will have Italian Air Force members conducting research.

If all goes well, the first of the more than 600 confirmed ticket holders will climb aboard next year. The company plans to reopen reservations once Branson soars. Initial tickets went for $US250,000 (NZ$360,000); no word on whether that will change. Branson promises a surprise after his ride to “give more people the chance to become an astronaut — because space belongs to us all.”

In the meantime, scientists are lining up for research rides, including Southwest Research Institute’s Alan Stern, who was behind Nasa’s New Horizons mission to Pluto and beyond.