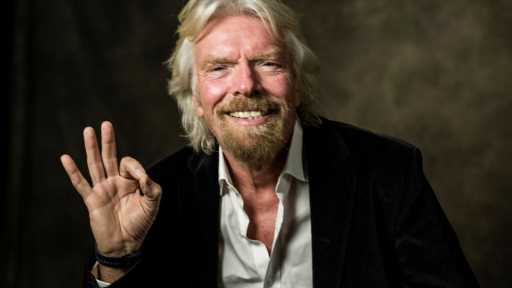 UPDATE, 10 AM: The billionaire has landed.

“It was the complete experience of a lifetime,” said a beaming Richard Branson of his trek into space, a place where no billionaire has gone before. “Now looking down at the spaceport, congratulations to everybody for creating such a beautiful plane and all the hard work for getting us this far.”

Branson’s rocket was released at an altitude of 53 miles — further than the 50-mile boundary considered by the US to be the boundary of space. The crew then had a few minutes of weightlessness before returning to earth.

The crew was cheered by a crowd on the tarmac as the plane landed. Branson, who served as a mission specialist, jogged down the tarmac for a reunion with his wife, children and grandchildren.

UPDATE: After being delayed by overnight thunderstorms, takeoff is now set for 10:30 AM Eastern time from the state-owned Spaceport of America in New Mexico.

EARLIER: Richard Branson, the swashbuckling owner of Virgin Galactic and media mogul, will take off for a sub-orbital flight on Sunday morning.

The flight will make Branson the first owner of a private space company to take his own spacecraft for a brief dip into outer space. If the launch is successful, he will beat fellow billionaire mogul Jeff Bezos and his Blue Origin flight plans by several days, as the Bezos launch is set for July 20.

Bezos’s team, however, claims that its flight will reach the true edge of space, going up 62 miles to Branson’s planned 55.

Branson will be joined by two company pilots and three Virgin Galactic crewmates. They will take wing from Spaceport America, a hub near Truth or Consequences, New Mexico.

The flight is expected to last at least an hour, with lift-off is set for 9 AM ET on Sunday, and will be broadcast on ABC and CBS. Many other news outlets plan at least livestreaming the event.

VirginGalactic.com will be posting a livestream that morning, hosted by late night host Stephen Colbert. Grammy-nominated singer Khalid will also be debuting a new song at the landing site after Branson’s anticipated return.

Instead of a ground launch, the Virgin Galactic VSS Unity will be carried by a twin-fuselage carrier jet, then released at 45,000 feet for its journey via rocket power.

Virgin Galactic was founded in 2004 and already has a waiting list of so-called “space tourists” eager to take their own flight.