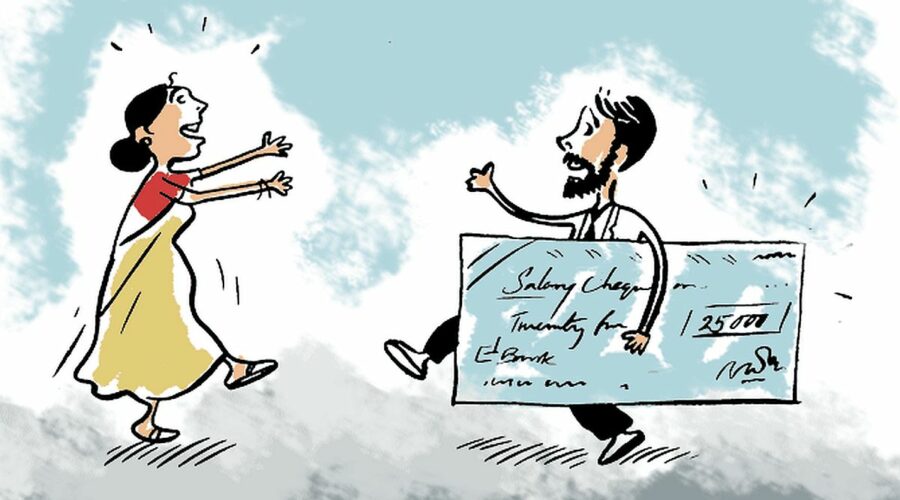 Despite Covid downturn, CEO salaries went up by an average of 19% in FY21. The average CEO salary was up 19 per cent in FY21, and listed companies together paid Rs 9,763 crore to their top management during the fiscal — up from around Rs 8,200 crore a year ago. This includes the total remuneration of all board members in the respective companies.

The biggest jump in CEOs’ salary was reported by mid-size companies.

Naveen Chopra, MD of Punjab Alkalies, topped the charts with a 6,279 per cent year-on-year rise in his salary in FY21. His remuneration rose from Rs 45 lakh in FY20 to Rs 28.68 crore in FY21. This made him the 23rd highest paid chief executive in FY21.

Rashmi Saluja, chairperson of Religare Enterprises, was another big gainer. Her salary was up 10X in FY21 to Rs 11.16 crore from Rs 1.14 crore in the previous year.

Similarly, Ronojoy Dutta, CEO of Interglobe Aviation, which operates IndiGo Airlines, saw an 8X jump in his salary to Rs 15.23 crore in FY21 from Rs 1.89 crore a year ago (see chart).

Sun TV Network promoters Kalanithi Maran and Kavery Kalanithi Maran were once again the top earners in FY21 with annual remuneration of Rs 87.5 crore each, but their salary didn’t grow during the year. They were followed by Hero MotoCorp’s CMD & CEO Pawan Munjal at Rs 86.93 crore, up 2.8 per cent year-on-year. Divi’s Lab Chairman and MD Murali

The list of executives with big salary jumps in FY21 included CEOs and CXOs from the country’s top IT companies.

Other IT sector CEOs with a big rise in remuneration in FY21 included Sandeep Kalra of Persistent Systems (up 153 per cent y-o-y), L&T Technology’s Keshab Panda (up 147.4 per cent), Wipro’s Rishad Azim Premji (up 129 per cent) and Mindtree’s Debashis Chatterjee (up 107.9 per cent).

Delaporte was the highest paid newly appointed chief executive in the country in FY21. He joined Wipro as MD & CEO with an annual salary of Rs 64.35 crore, making him fifth best paid CEO in FY21.

Analysts expect CEOs to get a good raise in FY22 as well, given strong earnings growth during the first nine months of the fiscal and a continued rally in stock prices. CEO salaries of most companies are linked to the company’s financial and stock market performance.