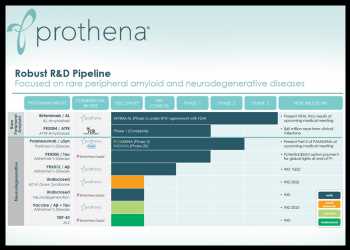 Shares of Prothena Corp. plc (PRTA), which closed at an all-time high of $77.39 on Monday, are up 544% year-to-date, thanks to the company’s strategic partnerships and progress across its portfolio.

With PRTA now at an all-time high of $77, the stock appears to have regained its former glory.

Prothena is a late-stage clinical company developing therapeutics based on its Protein Dysregulation Platform. The company has 1 wholly-owned phase III program, 2 partnered phase II programs and 5 potential IND’s from its discovery engine.

— The wholly-owned Birtamimab, a potential treatment for AL amyloidosis, is under a confirmatory phase III trial, dubbed AFFIRM-AL.

— Prasinezumab, developed by Prothena in collaboration with Roche, is under a phase IIb trial in patients with early Parkinson’s disease who are on stable symptomatic medication, dubbed PADOVA.

In an earlier phase II trial of Prasinezumab in early Parkinson’s disease patients, dubbed PASADENA, although the primary objective of change from baseline in the Movement Disorder Society-Unified Parkinson’s Disease Rating Scale (MDS-UPDRS) total score was not met, signals favoring Prasinezumab across other secondary and exploratory endpoints were observed in the trial.

— PRX005, a potential treatment for Alzheimer’s disease, under phase I study. This compound is being developed in collaboration with Bristol Myers Squibb (BMY).

As of June 30, 2021, Prothena had $402.5 million in cash, cash equivalents and restricted cash and no debt. The cash on hand does not include the $60 million upfront payment from Novo Nordisk received in 3Q 2021 or the $80 million from Bristol Myers Squibb for the exclusive U.S. license to PRX005 expected in 3Q 2021.