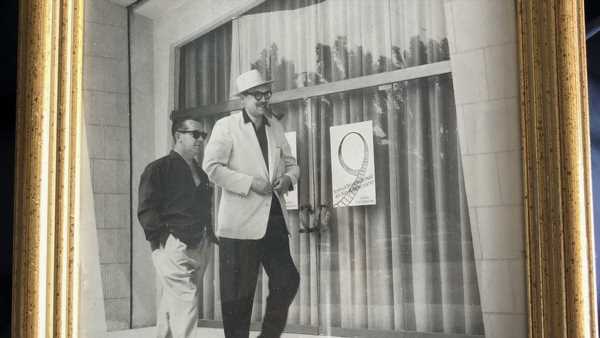 It was Father’s Day last week, so belated best wishes to dads everywhere. When my dad died, in 1993, he was just 8 years older than I am now, which I find rather sobering.

Above is a photo of him at the International Festival of Advertising Films in Venice in 1962, before it moved to Cannes. He’s the tall one with the hat, dressed like Don Draper’s slightly dodgy uncle. I have no idea who his mate is, other than that he barely reaches the armpit of my 6′ 7″ dad.

For some reason, my father never really talked to me about his work, or much else for that matter apart from rigorously enforced table manners which I now relish in ignoring. I presume he must have been a reasonably big shot to go to Venice; head of strategy or some such at a big London advertising agency. His friends were big, boozy, loud types who would tell raucous stories full of coded swearing which a reasonably smart 12-year-old could decipher. Us kids would run around keeping everyone supplied with drinks, which would probably count as child abuse these days, but learning how to mix a decent cocktail turned out to be a pretty handy life skill.

Things changed when he lost his job

In the early 70s, the UK was an economic basket-case and unemployment was affecting the middle class in a way that they thought only happened to others. My father was one of many who suffered. The stigma of redundancy was so bad in those days that one of my mate’s dads continued to take the train up to London every day to a non-existent job rather than tell his wife.

My dad was way smarter than me. He was very well-read and did the Times cryptic crossword every day in his favourite brown ink without any crossings out or using a dictionary. I do the same crossword today and can sometimes struggle even to get one correct answer.

He was in his mid-40s yet never got another job. He was quite bitter about this, something that he frequently took out on me. As a spotty, introverted teenager you have enough going on without a father that treats you like something he found on his shoe. However, some good did come from these difficult years as I developed both a heavy paranoia and a great degree of self-sufficiency. Very handy for when, despite his opposition, I eventually followed him into advertising.

Being smart is not enough

Nobody would have described my dad as being mediocre. But what I think he failed to understand was that being the smartest guy in the room is not in itself enough. Neither is it a good career strategy to be openly contemptuous of the dullards who happen to be your bosses.

Your career is about you versus the world. You may find some people who help you, but this will generally be because you are useful to them rather than out of sheer altruism.

If you work for a public company then your company doesn’t really care about you. As is made very clear, the aim of a public company is to maximise shareholder value by generating as much profit as possible; not to ensure employees have somewhere cosy to sit out of the rain. A company will exhibit only a momentary aversion to casting you aside once your cost to the business outweighs your benefit. You only have a job as long as you’re useful to them, which rather suggests that you should only work for them as long as it’s useful to you.

Loyalty is an important value in friends, family, and dogs, but companies, like any artificial organisation, are naturally incapable of expressing loyalty. There’s no point in being upset or surprised about this because, at least under capitalism, it’s what you signed up for. So don’t stress about losing your job, you’re just helping the economic system along.

Don't be bitter, be better

Maybe lockdown’s getting to me, but it’s good to go into employment with your eyes open. A true understanding of your company, an honest appraisal of how useful you are (or not), and being aware of its financial wellbeing, may help lessen any unpleasant surprises. If my dad had tempered his intellectual superiority with a more sanguine view of what was going on around him then maybe the second part of his career would have been as successful at the first. Or at least he might have had one.

On the other hand, maybe I wouldn’t have been aware of how useful a little paranoia is.

My dad taught me that, not that he even realised it. He was too busy with the crossword.

• Paul worked in Advertising at a Quite Good level across New Zealand, the UK and Australia including co-founding an agency in Auckland. This is a series of articles about how to make the best out of maybe not being the best.

11/09/2021 Business Comments Off on Paul Catmur: A business lesson from my Dad (who hated being called ‘Dad’)
Markets