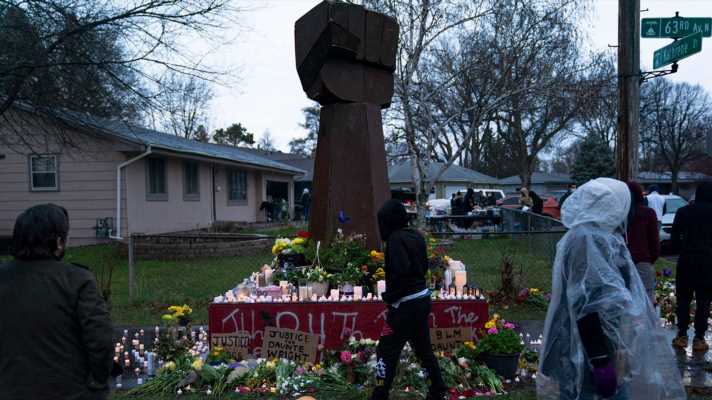 BROOKLYN CENTER, Minn. – A 26-year veteran of the Brooklyn Center, Minnesota, Police Department was identified late Monday as the officer who fatally shot a 20-year-old Black man during a traffic stop in what the police chief called an “accidental discharge.”

The Minnesota Department of Public Safety Bureau of Criminal Apprehension identified Officer Kim Potter, 48, who has been placed on administrative leave, as the officer who shot Daunte Wright on Sunday.

Police Chief Tim Gannon on Monday said he believed Potter mistook her firearm for her Taser when she shot Wright on Sunday and released body-camera footage of the incident during which Potter shouted “Taser” before firing.

Meanwhile, City Manager Curt Boganey was fired. Boganey said Monday the officer should be given due process after Mayor Mike Elliot said she should be fired. The city manager has control of the police department, but Elliot said the city council voted Monday to give the mayor’s office “command authority.”

A massive law enforcement presence descended on the Minneapolis area, and about about 1,000 Minnesota National Guard troops were expected to be activated by Monday night. Brooklyn Center is about 10 miles north of Minneapolis, where the trial of former police officer Derek Chauvin in the death of George Floyd was in its third week of testimony.

Wright’s family hired civil rights attorney Ben Crump, who represents the Floyd family and many other families who have lost loved ones in police shootings, and co-counsel Jeff Storms. Crump and Storms will hold a news conference Tuesday with Wright’s and Floyd’s families in Minneapolis.

Here’s what we know Tuesday:

Potter was identified late Monday by the Bureau of Criminal Apprehension, the state agency leading the investigation into Wright’s death.

According to the Star Tribune, Potter, 48, became a police officer in 1995 and has served on the department’s negotiation team.

Potter was also one of the first officers on the scene of a fatal police shooting in 2019, when officers shot an autistic man, Kobe Dimock-Heisler, who had allegedly grabbed a knife, the Star Tribune reported.

The newspaper, citing an investigative report from the Hennepin County Attorney’s Office, reported Potter told two officers involved in the shooting to “exit the residence, get into separate squad cars, turn off their body worn cameras, and to not talk to each other.”

Hennepin County Medical Examiner said Monday that Wright died from a gunshot wound to his chest and ruled the death a homicide.

The crowds began gathering in the afternoon outside the police headquarters in Brooklyn Center and drew hundreds by the evening.

A drum beat incessantly, and the crowd broke into frequent chants of “Daunte Wright!”

About 90 minutes after the curfew deadline, police began firing gas canisters and flash-bang grenades to drive protesters away, sending clouds wafting over the crowd and pushing some back, at least briefly. Some protesters, wearing gas masks, picked up smoke canisters and threw them back toward police.

About 40 arrests were made ranging from curfew violation to rioting, Minnesota State Patrol Col. Matt Langer said during a news conference early Tuesday. Some officers suffered minor injuries from thrown objects during the protests, Langer added.

A candlelight memorial for Wright, including a raised fist statue, was erected where he was shot Monday night.

Demonstrators gathered in other cities around the U.S., too, drawing crowds in New York and Los Angeles, as well as in Oakland, California; Portland, Oregon; and Louisville, Kentucky.

Brooklyn Center is a blue-collar city of more than 30,000 residents. In the first-ring of suburbs outside Minneapolis, it’s among the most diverse cities in Minnesota, with around 60% people of color.

Protesters took to the streets in Brooklyn Center, Minnesota, where the family of Daunte Wright says he was shot by police after a traffic stop.

Wright’s family remember son, brother: ‘He would give you the shirt off his back’

At a vigil Monday, Wright’s family expressed their frustration and emotion as they remembered Wright, a 20-year-old father of a young child who was driving his new car when he was shot.

“He was my son, and I can never get that back, because of a mistake, because of an accident?” his mother, Katie Wright, said.

“I just need everyone to know that he is much more than this,” Wright added, per the Star Tribune. “He had a smile that was angelic.

Hundreds gathered for the vigil near the site where Wright was shot.

13/04/2021 Business Comments Off on Officer identified as a 26-year veteran in fatal police shooting of Daunte Wright: What we know
Markets