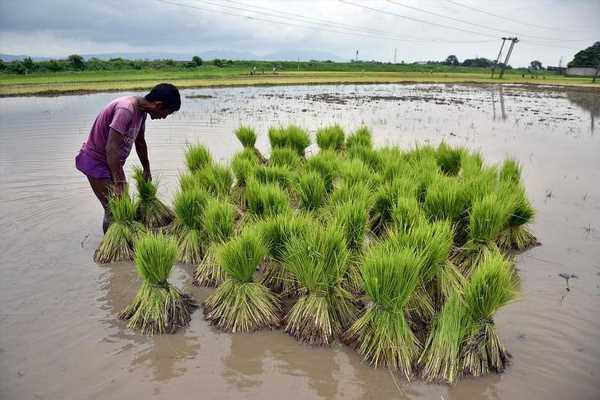 A back of the envelope calculation being floated by some experts shows that at the current levels of production and marketable surplus, if the Centre legally guarantees to purchase a portion of the 22-odd crop on which MSP is declared whenever their prices fall below the same, it will have to incur a cost of around Rs 1 trillion-Rs 1.5 trillion crore per annum. Satbeer Tyagi of Badagaon village in Uttar Pradesh’s Baghpat district lies in a cot, while his nephew Nitin does all the talking.

During the conversation that this correspondent had with his nephew on various issues of the day a few weeks back, Satbeer was largely silent.

But his eyes lit up as soon as the discussion veered towards farming, sugarcane, shortage of fertilizer, and the rising cost of inputs.

“Things were much better earlier when our production cost had not risen this much while returns from crops, such as sugarcane, were better,” Tyagi said.

On the claims of increased wheat procurement over the last few years to supplement incomes, Tyagi claimed that numbers floating around were somewhat misleading at many purchase centres, traders connived with officials from cooperative societies to game the machinery while the farmer seldom got the benefit.

As one of the longest and most vocal farmers’ protests in India completes a year with the decision to repeal three controversial farm Acts, it is the silent support of people like Satbeer and its electoral impact on western UP that may have forced the Centre’s move.

The agitation that started as stray protests against the Acts in Punjab gradually grew in strength and spread to other parts of the country, especially neighbouring Haryana, western Uttar Pradesh, and Rajasthan.

Among the key demands of agitating farmers has been a legal guarantee on minimum support price (MSP).

The protest reached a crescendo when thousands of farmers from Punjab and elsewhere mar­ched towards Delhi late last year and decided to block the main entry points once they were denied entry.

The Centre, on its part, held 11 rounds of discussions with the protesters and even offered to amend some of the provisions without much success.

With now one of their chief demands met, farmers have now moved on to force the government to concede on MSP.

Though on Saturday, protesting farmers under the aegis of the Samyukta Kisan Morcha (SKM) decided to postpone their planned tractor march to Parliament next week, they have decided to meet again on December 4 to assess how the two Houses have progressed on their demands.

The SKM also called upon the government to restart the dialogue process, and discuss all the pending issues.

The Centre, on its part, has accepted another demand to decriminalise stubble burning and stressed that as announced by the prime minister, it will soon constitute a panel comprising state and central officials, along with representatives of farmers groups, experts, economists, and other stakeholders, to discuss the pending issues, including making MSP relatively effective.

Of all the demands, legalising MSP is tricky and highly complicated.

The form and manner that it may take will depend on several factors and its fallout could be far-reaching and lasting.

Previous attempts at fixing the floor rate of farm crops to be purchased by private traders have not been successful.

In August 2018, the Maharashtra government under then chief minister Devendra Fadnavis decided to amend the state APMC Act, making it illegal for a private trader to purchase any agricultural produce below the government-fixed MSP.

The amendment said that any trader who failed to purchase farm goods at MSP could attract a jail term of a year or a fine of Rs 50,000.

The decision that was cleared by the state Cabinet found strong objection from traders who withdrew from the market as open market rates were lower than the government fixed price, finally leading to the abandonment of the proposal.

NITI Aayog member Ramesh Chand in a policy paper floated in November 2020 against the backdrop of the anti-farm Acts protest said that economic theory, as well experience, indicates that a price level that is not supported by demand and supply cannot be sustained through legal means.

“I don’t think legalising MSP at C2 (cost of cultivation)+50 per cent as being demanded by farmer groups is feasible as it will put off private trade and distort the market that functions on the common principle of demand and supply,” S Mahendra Dev, director of Indira Gandhi Institute of Development Research (IGIDR), told Business Standard.

He said that any fixed pre-determined price will push away private traders whenever production is more than demand, and there is a price slump in the market.

“This, in turn, will lead to government de-facto becoming the primary buyer of most farm produce for which MSP is declared, which is unsustainable,” Dev said.

He said instead the government should look at something like Madhya Pradesh’s Bhawantar Bhugtan Yojana (BBY) or any other price support system to help the farmers, though the cost is a major factor here.

“I think, the Centre should look at some other manner to assure MSP to ensure that in future, no government can tinker with the same,” Dev said.

However, Sukhpal Singh, professor and chairperson of the Centre for Management in Agriculture (CMA), IIM, Ahmedabad feels the entire issue of legal guarantee for MSP is being misinterpreted.

“It does not mean that government buys everything from everyone, but instead it means that government should not shy away from intervening in the markets in the event of a price fall, which in anyways is done through schemes, such as market intervention scheme (MIS),” Singh said.

He said the right of farmers also means the right to fair pay for the farmers — which can be done only if the government intervenes and purchases a certain portion of the commodity to stabilise the markets.

Singh also added that legalising MSP should not mean that it becomes a benchmark price for private traders to purchase.

A back of the envelope calculation being floated by some experts shows that at the current levels of production and marketable surplus, if the Centre legally guarantees to purchase a portion of the 22-odd crop on which MSP is declared whenever their prices fall below the same, it will have to incur a cost of around Rs 1 trillion-Rs 1.5 trillion crore per annum, which can vary with market conditions as all crops won’t sell below MSP at all the time.

14/12/2021 Business Comments Off on Of all farmers’ demands, legalising MSP is tricky and highly complicated
Markets