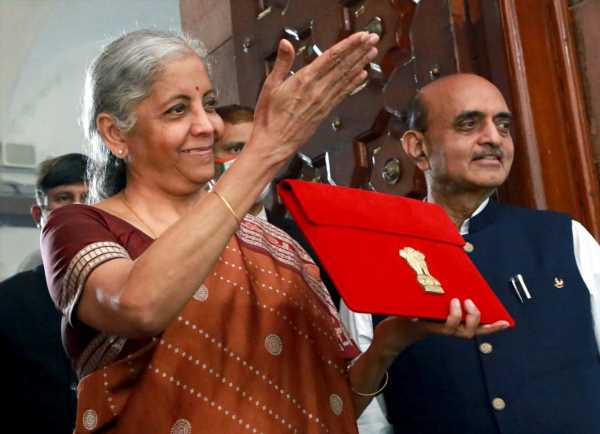 ‘The term ‘pro-growth’ must be qualified somewhat because, while a rising tide will lift all boats, it will not necessarily do so equally.’

“Consistency is worth highlighting because one place where this government has often fallen short is on policy consistency. A lack of predictability has hurt investor sentiment and raised questions about the evenness of the playing field for firms,” says Milan Vaishnav, Director and Senior Fellow at the Carnegie Endowment for International Peace, the Washington, DC-based think-tank.

Dr Vaishnav’s primary research focus is the political economy of India. He is adjunct professor in the Edmund A Walsh School of Foreign Service at Georgetown University and has written the award-winning book When Crime Pays: Money and Muscle in Indian Politics.

“Another attractive dimension of this Budget is the seeming conservativism of nominal growth estimates, which means there is room for a positive surprise on the upside.”

“I think the inward turn and repeated references to self-reliance are worrisome,” he tells Rediff.com‘s Archana Masih in an e-mailed interview from Geneva.

What are the big takeaways from the Budget?

The biggest takeaway for me was the ‘workman-like’ nature of this budget.

Not too many surprises, not too many gimmicks, and a welcome dollop of consistency.

The latter is worth highlighting because one place where this government has often fallen short is on policy consistency. A lack of predictability has hurt investor sentiment and raised questions about the evenness of the playing field for firms.

Second, I think many analysts have termed this a ‘pro-growth’ budget.

I think that is right to a certain extent. The government has ratcheted up capital expenditure and emphasised the hope that public spending will ‘crowd in’ private investment.

Subsidies, on the other hand, have been cut, which is something that has surprised many observers given important state elections are around the corner.

However, I think the term ‘pro-growth’ must be qualified somewhat because, while a rising tide will lift all boats, it will not necessarily do so equally.

I think there is sufficient evidence of a ‘K-shaped’ recovery, or the fact that Indians at the bottom of the income spectrum have not enjoyed the kind of recovery or return to normalcy those higher up on the income ladder have enjoyed.

To that end, the cuts to MGNREGA and food subsidies and the lack of new spending on cash transfer stabilisers could reinforce that inequality.

All in all, one must sympathise with the government’s tricky position: They had to make some hard trade-offs with quite a bit of uncertainty about the global environment and the COVID-19 pandemic — not to mention oil prices.

What does it signal about the overall health of the Indian economy in the global context?

I think it signals a degree of optimism on the government’s part that India has seen the worst of the COVID pandemic and that it will be able to weather the Omicron surge with relatively minimal collateral damage.

I think the government also felt, given the global environment, that India is a relatively bright spot in the global economy and that it did not need to tinker too much with the underlying fundamentals.

While the fiscal deficit number (6.4 percent of GDP) is higher than what some economists anticipated, I think markets will be willing to cut the government slack given extenuating circumstances.

The finance minister said that the Budget seeks to create the foundation of an economy that will steer the country over the next 25 years. Do you see it as a promising, forward-looking budget that can boost growth?

Yes and no. I think the emphasis on growth is well placed. Continued investments in basic housing and piped water are important and perhaps under-emphasised in the commentary.

Another attractive dimension of this Budget is the seeming conservativism of nominal growth estimates, which means there is room for a positive surprise on the upside.

I think the inward turn and repeated references to self-reliance are worrisome. A central component of India’s growth take-off in the 2000s — best articulated by economists Shoumitro Chatterjee and Arvind Subramanian — was the country’s dramatic export performance, including in manufacturing (granted, of a largely high-skilled variety).

The tariff increases we’ve seen in recent years, the dismissal of regional trade deals, a rise in import substitution, and the emphasis on creating national champions — together, they create a worrisome picture that India is doubling down on an earlier strategy that conclusively failed.

What are the areas of concern that the Budget should have addressed and failed to do so?

There was relatively little in the Budget on agriculture. One would have liked to have seen a policy response in the wake of the repeal of the controversial farm laws.

Indian agriculture still lacks a coherent policy framework for reform and renewal. The government seems short on ideas on this front.

Second, much of the emphasis in this Budget was on supply-side measures and reviving India’s moribund investment cycle. We saw relatively little on the consumption or demand-side.

Again, the government is making a big bet that India can beat the pandemic and the kind of relief measures the country needed during the first and second waves will not be needed going forward.

The Budget proposes to create 6 million jobs through Make in India in the next 5 years — while the Centre for Monitoring Indian Economy said that 6 million salaried jobs were lost in November 2021 alone.
In view of rising unemployment, how does the Budget deal with the unemployment crisis in India?

The hope clearly is that public investment will kick of a virtuous cycle — in fact, the finance minister used that very phrase in her speech.

Public investment will create new private investment opportunities and together this will stimulate job creation this is the hope.

One area that could be potentially promising is the green energy sector, where this budget does quite a bit — especially on solar.

There is also a push to further digitise and modernise the economy but this cuts both ways. It can create new efficiencies while, at the same time, harm small firms that exist largely in the informal sector.

The outlay for MNREGA has been reduced by 25%. Considering MNREGA provided employment to many during the pandemic — will this not limit the scope of employment for many in the rural hinterland.
Would not an increase in allocation have enhanced rural demands and reduced financial distress among rural poor?

We come back to the standard philosophical debate among economists about whether to invest in demand or supply-side interventions.

This Budget places a bet, by and large, on the latter. I would not be surprised if a mid-course correction is made should India get hit by another COVID wave.

The thinking clearly is that the contact-intensive sectors that suffered the most will find their feet in 2022 and the sort of pause we saw in urban economic activity will come to an end.

03/02/2022 Business Comments Off on ‘Not too many surprises, not too many gimmicks, and welcome consistency’
Markets