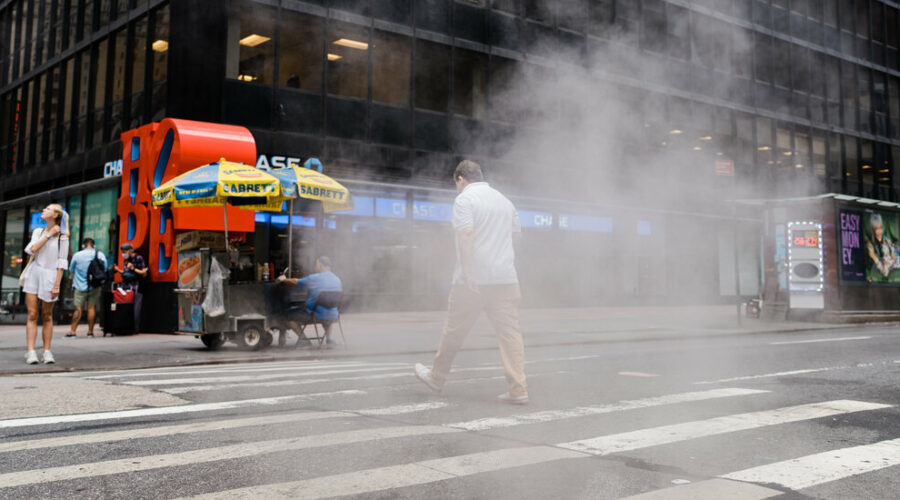 For New York City and its trillion-dollar economy, September was supposed to mark a return to normal, a moment when Broadway theaters reopened, stores and restaurants hummed, and tourists and office workers again filled the streets.

But that long-awaited milestone has been upended by the Delta variant of the coronavirus. One big company after another has postponed plans to come back to Manhattan’s soaring towers. Trade shows have been canceled. Some small businesses have had orders evaporate.

It is a setback for a city that has lagged behind the rest of the country in its economic recovery, with a 10.5 percent unemployment rate that is nearly twice the national average. Now, rather than seeing the fuller rebound it was counting on, New York is facing fresh challenges.

“The Delta variant is a meaningful threat to the city’s recovery,” said Mark Zandi, the chief economist at Moody’s Analytics. “This is not going to be easy. It’s going to be a long time before New York City gets its economic groove back.”

Covid-19 cases have risen sharply in the city since early July, reaching the highest level since April. Hospitalizations have not risen as greatly, and the death rate has remained low. The situation is worrisome enough, however, that the city has begun requiring patrons and employees of bars, restaurants, gyms and indoor entertainment venues to show proof of vaccination — a development unforeseen when the summer began. 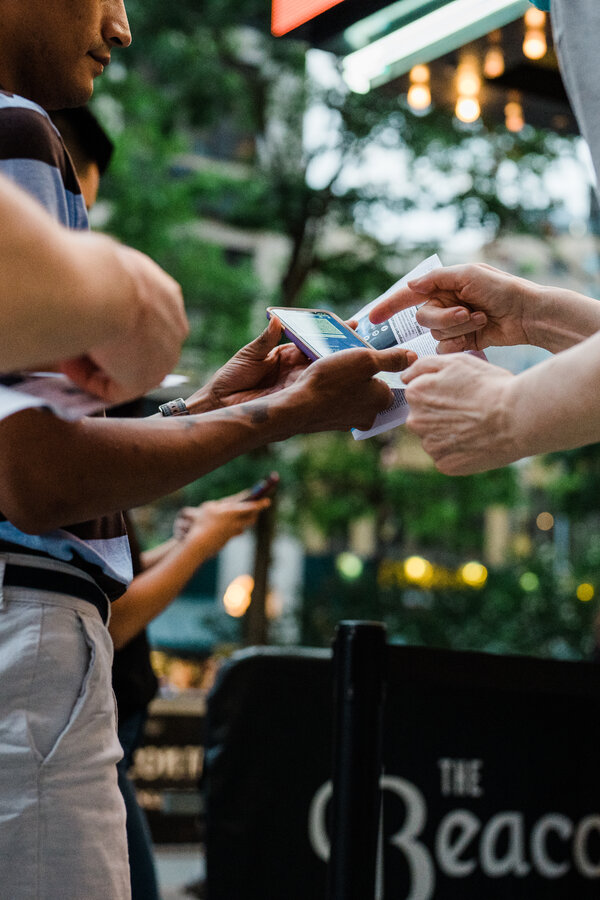 There are signs of hope, or at least determination. Broadway shows, a major tourist magnet, are on track for a September reopening, as is in-person instruction in city schools, which will free some caregivers to return to the work force. But even as the city sponsored an official Homecoming Week, capped by a concert on Saturday in Central Park that was cut short by lightning, cancellations of trade shows and other big events have mounted.

Regaining momentum could be painfully slow. James Parrott, an economist with the Center for New York City Affairs at the New School, expects the city to add 20,000 to 30,000 jobs a month in the fall, instead of 40,000 to 50,000, because of Delta.

Overall employment remains more than half a million jobs below where it was before the pandemic, with steep losses persisting in the leisure and hospitality industries and in other blue-collar fields. Recouping those service jobs depends in part on the return of white-collar workers who have worked remotely — and have even left the city.

Many companies had aimed to bring employees back to the office shortly after Labor Day, at least part-time. But those plans have been scrapped. Facebook, which employs 4,000 people in New York, has put off a return until January, while the financial giants BlackRock and Wells Fargo are now planning a return in October.

“Data, not dates, is what drives our approach for returning to the office,” Facebook said in a statement. “We continue to monitor the situation and work with experts to ensure our return to office plans prioritize everyone’s safety.”

Boston Properties, which owns nearly 12 million square feet of space in the New York region, said about 40 percent of prepandemic occupants had returned to its buildings earlier in the summer, based on lobby badge swipes. In August, amid Delta’s rise and vacation getaways, that figure had dipped to around 30 percent, said Owen Thomas, the company’s chief executive.

“I think the return to the office is a ‘when’ question, not an ‘if’ question,” he said. “Delta is affecting the when.”

There are some “if” questions nonetheless. As remote work extends well into a second year, and as much of the contact between professionals and clients continues to be conducted online, it is less clear whether some suburban workers will ever return to the city and to their sometimes-arduous commutes.

Greenberg Traurig, a global law firm, was planning to move into four floors of a new building near Grand Central Terminal in October. But many of Greenberg’s lawyers and investor clients relocated to Long Island during the pandemic, prompting the firm to reduce its office space in Midtown to three floors. It plans to open two new offices on Long Island, including one in Bridgehampton.

“For me, this is a no-brainer,” said Richard Rosenbaum, the executive chairman. “We accept that this is likely a permanent change in the way people work.”

At the same time, corporate get-togethers are in renewed jeopardy. Mr. Zandi, the Moody’s economist, had two in-person speaking engagements set for September and October, but they were recently turned into remote events.

“People are nervous about the variant,” he said. “At the very least, it dents New York’s recovery, and if cases continue to mount, then it will delay the recovery.”

The on-again, off-again situation among big companies, as well as for events like weddings and parties, has been destabilizing for businesses that depend on them.

Patrick Hall, a co-owner of Elan Flowers in the SoHo neighborhood of Manhattan, has been dealing with a flurry of changes as clients have grown more skittish about the virus.

Soon-to-be brides are cutting their guest lists in half and changing venues at the last minute. One client, who has not yet paid a deposit, had been emailing Mr. Hall about a nonprofit organization’s gala in October for 300 people and recently went silent.

Some large companies had asked Mr. Hall to prepare flowers for return-to-office parties in the fall, but Mr. Hall wonders whether he can bank on those. He had planned to expand his staff of seven people to handle an increase in business in September but is now unsure about how many employees to hire.

“I’m trying to hang on and not lose it,” Mr. Hall said. “I need these larger events in September for my business to survive.”

New York’s huge travel and leisure industry is also having an uneven recovery.

More than any other American city, New York counts on international tourists. So the Biden administration’s decision in late July to continue barring entry to visitors from Europe and several other parts of the world was a blow.

Having written off the bulk of foreign tourism in August, when New York is usually awash with European vacationers, tourism industry officials fear that the Delta variant could keep visitors away during the crucial holiday season, too.

Domestic travelers have returned to New York in rising numbers, Mr. Dixon said — foot traffic in Times Square has been above 200,000 a day, higher than in May and June — but they do not stay as long or spend as much as overseas tourists.

At the Loews Regency, a Park Avenue hotel known as a gathering spot for local power brokers and tourists alike, occupancy has been around 75 percent, according to Jonathan M. Tisch, the chief executive of Loews Hotels. But getting to the full-occupancy levels of late 2019 and early 2020, he said, would require a return of business travelers and especially international tourists.

“If you could tell me the impact of the Delta variant, I could tell you the occupancy for the rest of the year,” Mr. Tisch said. “It’s a great unknown.”

The Javits Convention Center was preparing to host its first trade show in more than a year when the organizers of the New York International Auto Show said in early August they were calling off their 10-day event there. A week later, the Specialty Food Association announced that its annual Fancy Food Show, scheduled for late September at Javits, would not take place.

“Given the current significant national upswing in Covid-19 cases due to the Delta variant, we believe that holding a large indoor event and protecting the general safety of all show participants will be nearly impossible,” the food show's organizers said.

New York City’s largest hotel, the 2,000-room Hilton in Midtown, began taking reservations with a plan to reopen in August. But the hotel’s managers canceled those bookings and tentatively reset the reopening for Sept. 1.

Still, some businesses have plowed ahead. Genting Group, a Malaysian operator of casinos, opened a 400-room Hyatt Regency hotel at its Resorts World gambling parlor near Kennedy International Airport in early August.

After spending $400 million and three years getting the hotel built, the company did not want to wait any longer to open it, said Bob DeSalvio, the president of Genting Americas East.

“We understand that it’s going to take a while for travel to fully ramp back up,” he said, so the hotel was staffed for 50 percent occupancy. But there clearly was pent-up demand, because the hotel’s first weekend was sold out, Mr. DeSalvio said.

Caroline Hirsch, the owner of Carolines on Broadway, has not canceled any shows at her comedy club and is moving forward with the New York Comedy Festival, which is scheduled to begin on Nov. 8 and feature more than 100 shows across the city.

But this month, she noticed for the first time since reopening in May that some people who bought tickets for the club did not show up.

“We were off to a great start,” Ms. Hirsch said. “We thought we were going to be over this hump. Now there’s another hump. We’re all up in the air again.”

Ms. Hirsch hopes that the city’s new executive order requiring proof of at least one vaccination to enter many indoor establishments will make audience members more comfortable. The mandate went into effect on Tuesday, and on Sept. 13 the city will begin fining businesses that fail to comply.

Other business owners are less sanguine about the mandate; it has produced at least one legal challenge. And as September approaches, the prospect of business as usual, which seemed tantalizingly close a few months ago, is proving elusive.

At the Shambhala Yoga & Dance Center in Prospect Heights, Brooklyn, a wave of students signed up after in-person classes resumed in late April, when vaccination efforts were in full swing. But in recent days, attendance has ebbed and flowed with news of the Delta variant’s outbreak, said Deanna Green, Shambhala’s owner.

“Once we saw uncertainty around the vaccines and the Delta variant, I have noticed a little bit of a lull,” Ms. Green said. Some yoga classes that typically had 10 students dropped last week to six or seven, she said.

“We’re really dependent on a steady flow of people coming through the doors,” she said. “I wish there was more of a level of certainty.”