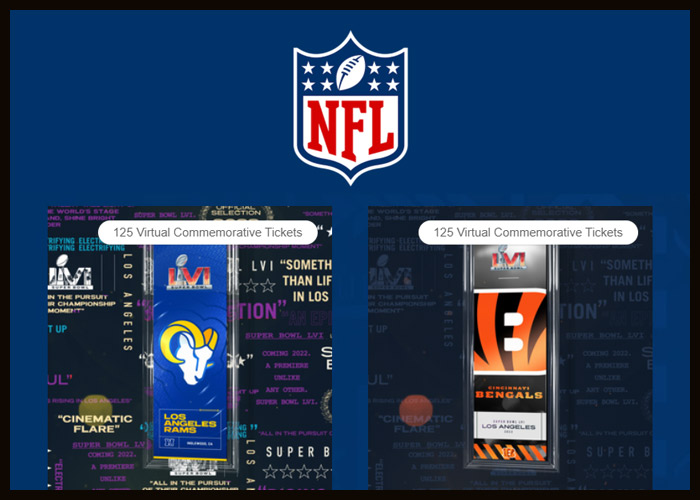 The National Football League (NFL) has launched virtual commemorative tickets in the form of non-fungible tokens (NFTs) for fans to celebrate Super Bowl LVI in Los Angeles on February 13, 2022. The fans who attend Super Bowl LVI will receive a customized NFT to commemorate once in a lifetime gameday experience.

This is part of the Super Bowl LVI League’s efforts to leverage NFTs as a tool to engage and celebrate by offering each fan attending Super Bowl LVI a complimentary, customized NFT featuring their unique section, row, and seat to commemorate gameday.

This will also commemorate Super Bowl’s return to Los Angles for the first time in almost 30 years, with the NFL also releasing a series of seven historic commemorative NFTs for purchase.

This move will by the League will provide fans a digital keepsake of their Super Bowl experience. Until now, fans were collecting ticket stubs of some of the season’s biggest games.

A new NFT will be released every day beginning on February 6 and culminate on February 13 with the release of an NFT featuring the current Super Bowl LVI ticket artwork designed by a local Southern California artist.

“We first began offering virtual commemorative ticket NFTs to fans during the regular season. We witnessed great success with this one-of-a-kind fan experience, which provided the momentum to continue this program throughout the postseason and ultimately at Super Bowl LVI in Los Angeles,” said Bobby Gallo, SVP, Club Business Development, NFL.

Last week, the NFL released the club specific NFTs for the Super Bowl LVI participating teams, the Los Angeles Rams and the Cincinnati Bengals. It will also release a final NFT of the Super Bowl LVI winning team later in the month.

NFTs are pieces of tokenized content that are verifiably unique, with the authenticity, rarity, and scarcity, and are secured on blockchain. They are typically built on Ethereum, though other blockchains like TRON and NEO can be used. The NFT transaction is executed on blockchain using smart contracts to store and record their unique information.

When a person buys an NFT of a collectibles and rare items of art and music, he receives a token containing the same only and does not get ownership rights. NFTs are currently the hottest product in the digital asset space, with celebrities launching NFTs for their art and music collections as another revenue stream for their work.