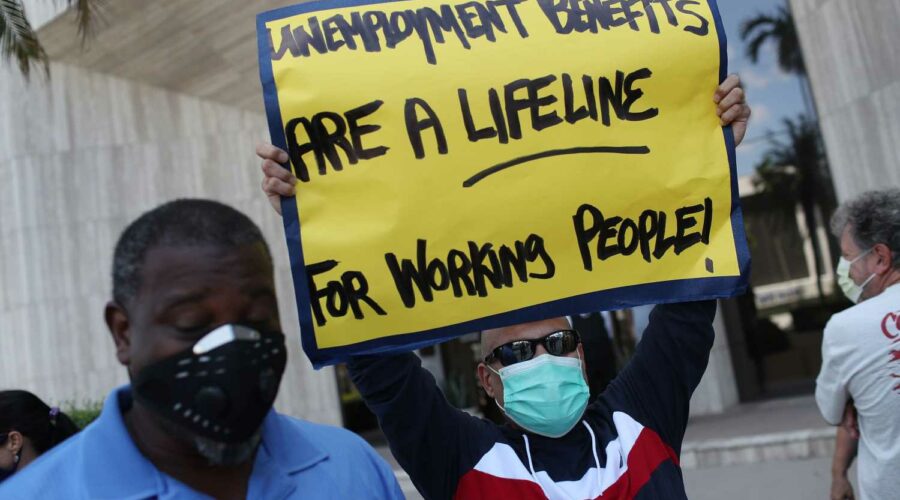 As Covid-19 restrictions loosen for businesses large and small, jobs are coming back.

For people who are still out of work and collecting unemployment benefits, that could make navigating the rules tied to those weekly checks more complicated.

Signs of a recovery come as the $300 in enhanced federal unemployment benefits that Congress put in place is slated to last through September.

Many states — currently a tally of about 21 — have decided to pull those extra benefits due to concerns that people do not have an incentive to resume employment.

President Joe Biden addressed the issue earlier this month by stepping up efforts to help get people back to work.

That included funding for state and local governments, restaurants and child care that could help workers return.

Employers can also bring back employees part-time without requiring them to give up their unemployment benefits.

But the president's moves also included a caveat.

"Anyone collecting unemployment who is offered a suitable job must take the job or lose their unemployment benefits," Biden said.

The remarks came as debate has become more heated over whether people are avoiding work altogether due to the enriched benefits they can claim while staying home.

However, Biden maintained that there are still 8 million fewer jobs than there were pre-Covid.

For unemployed workers at any time, the struggle has always been finding a new opportunity that is the right fit.

Now, that search could be complicated by safety and other concerns.

And yet when it comes to how much wiggle room people have to wait it out and continue collecting unemployment benefits, experts generally agree the answer is not much.

"You have to show an earnest effort to be attached to the labor market," said Victorine Froehlich, an attorney who helped train volunteers for the New York State Bar Association's pro bono unemployment initiative.

"This is not a welfare program. It's for those who lost their job through no fault of their own," she said.

However, you do still have the right to turn down work in certain situations.

Generally, if a job is not suitable, you have the right to not accept the job, according to Andrew Stettner, senior fellow at the Century Foundation, a progressive, nonpartisan think tank.

That particularly goes for precautions related to Covid-19. For example, if your jurisdiction or state requires retail customers to be masked but the store you work in is not enforcing those rules, you can say you do not want to go back to work, Stettner said.

Even if you lose your state benefits because you could not go to work during Covid-19, you can apply for the Pandemic Unemployment Assistance program, he said.

Notably, the PUA program may enable you to get unemployment insurance coverage if specific child care issues are preventing you from returning to work, according to Froehlich.

However, proving a job is not a fit for you can be difficult, even during Covid-19.

"The basic rule is that if a suitable job is offered to you … you cannot refuse that job and stay on unemployment benefits," Stettner said.

Admittedly, proving that you turned work down because of health concerns can be difficult, particularly as rules around mask wearing and other precautions change from day to day.

"What they're going to look at is the prevailing rules when, in fact, you refused that offer," Stettner said.

The bottom line is that you have to have a specific reason for refusing a job, not just a general feeling, he said. That could include if you're undergoing treatment for cancer or if your employer is not taking an obvious precaution.

But if you have concerns because you work in a small space but your state is allowing it, you have to go back, he said.

What's more, you need to show that you tried to communicate with your employer and took every step possible to protect your job, Froehlich said.

Keep in mind there are also limits if you get a new job offer. If it's within an hour's commute by car or public transportation, or within 10% of your prior wages, for example, it would be considered unreasonable not to accept the offer, Froehlich said.

As time goes by, unemployed workers are expected to expand their search beyond the industry and positions they previously worked in, she said.

If you're collecting jobless benefits, you will have to prove you are still searching for work.

The unemployment system will generally require you to fill in a questionnaire when you first apply for benefits and each subsequent week regarding your search efforts.

"Generally speaking, when you get unemployment you have to report your job search activities," said Edgar Ndjatou, executive director at Workplace Fairness, a Washington, D.C.-based nonprofit dedicated to educating the public on workers' rights laws.

To prove you are looking, you may be required to list job contacts and employers where you submitted applications. You may also need to take part in certain job search activities.

"If you don't participate in them, you could lose your benefits, at least for that week," Stettner said.

Admittedly, this may be challenging for some workers amid an uneven recovery, with some industries coming back faster than others.

"Part of this is just a process," Stettner said. "You're seeing job shortages in targeted sectors that have some specific barriers."

Those conditions should ease as we approach the fall, he said, when children go back to school and people get used to new guidance, which will ultimately make it easier to return to work.

"It's like a crowded bus at the airport," Stettner said. "Everyone's got their baggage, social baggage or child care baggage. They've got to resolve all of that before they get on the bus."

If you're still unemployed, the key thing to remember is not to get discouraged and to start your search again, if you have to.

Also remember that there are resources to help you, such as food stamps and food pantries, if you can't find a job and are having trouble accessing unemployment benefits, Stettner said.

"Don't be ashamed of needing help, because it's not your fault," Stettner said. "It's about what's happening in the economy."

21/05/2021 Business Comments Off on More states are eliminating the extra $300 per week in unemployment benefits. What to know about your rights
Markets