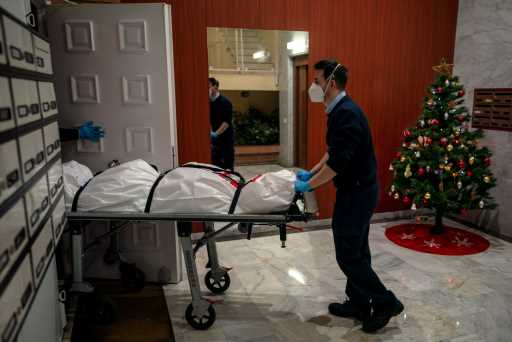 Specifically, Los Angeles County recorded 274 deaths from the virus in the previous 24 hours for a total of 10,056.

The 14-day average number of daily deaths for the virus according to Ferrer was about 150. That’s “about equal to the number of deaths from all other causes, which is about 170,” said Ferrer. “Most heartbreaking is that if we had done a better job reducing transmission of the virus, many of these deaths would not have happened.”

“The impact of this current surge is overwhelming our hospitals and and it is increasing deaths,” she said. The percentage of Covid-infected patients who are now sent to the ICU had risen from 20% last week to 26% on Wednesday. So it’s not just the virus that’s proving fatal, but also the nightmare scenario of Angelenos dying because they cannot get the appropriate care from overwhelmed ICUs.

“Some patients are waiting in ambulances because there is no space,” said L.A. County Supervisor Hilda Solis before revealing that, “Our medical examiner is receiving overflow of bodies from hospitals that are unable to store them.”

Solis continued: “My understanding is that the medical examiner will receive assistance for their operations from the California National Guard, and we’re expecting them by next Monday. It’s such a grim reality, but I’m compelled to say this because it has gotten to the point that we need to show the true toll of what this virus has taken and can take.

“There’s many situations in which as many as 10 ambulances are waiting to offload patients, and those patients are being cared for and treated in the ambulances as if it’s part of the emergency room bay,” said L.A. Director of Health and Human Services Dr. Christina Ghaly.

“Hospitals are treating patients in other areas that are not typically used for patient care at all,” she continued, “not just not used for inpatient care. They’re using places like conference rooms or gift shops to provide patient care.”

The health officials warned that as bad as things are now, they will worsen in January due to public travels and gatherings over the Christmas holiday, and those likely to occur despite warnings over New Year’s weekend.

“We all need to be prepared for another surge that will start with even higher case numbers in early January,” Ferrer said. “Increasing cases always translates to more and more people being rushed to already overcrowded hospitals and tragically also results in more people continuing to die.”

Given the amount of traveling and intermingling that have likely happened over the holidays, said Ferrer, “we need to be prepared for an increase on top of this increase.”

What’s more, at the top of a conversation with Dr. Anthony Fauci on Wednesday, California Governor Gavin Newsom revealed that the new, reportedly more infectious strain of Covid-19 first identified in the U.K. had been found in CA, specifically Southern California.

Newsom said he was informed “just about an hour ago” that the new strain had been found in the state. While the variation is much more infectious, it does not appear to be more deadly on a case-by-case basis, according to experts. Fauci said he wasn’t surprised that there was a case “and likely more cases in California.”

That, on top of the overflows and deaths described by L.A. County health officials, paints a very dark picture of the coming weeks in L.A.

“Many mortuaries across the county are filling up and they’re having trouble trying to make space,” said Ghaly, who oversees the four county-run hospitals. “This is causing a backup of bodies at a variety of facilities across the entire county.” Ghaly said the county was “working with those facilities to try and come up with alternatives for storing those bodies.”

Ghaly said the L.A. County morgue, which she oversees, had “386 open spaces at end of yesterday.” The issue, she said, was with “private hospitals who are experiencing issues with a backup of bodies due to mortuaries being over capacity.” The county medical examiner has taken charge of that capacity — or lack thereof.

L.A. Mayor Eric Garcetti said that, a couple weeks ago, Cedars-Sinai had two floors dedicated to Covid-19 patients. As of Wednesday, the hospital had eight floors occupied by virus patients.

In terms of patients waiting in ambulances for beds to open up Ghaly said, “There have been some unfortunate outcomes for patients who could not be offloaded to hospitals in a timely manner.” When asked for specifics, she did not provide them.

Also on Wednesday, the county reported 10,392 new cases. The lower number of daily new cases is probably due to the fact that testing centers were closed over Christmas, said Ferrer.

“There is a lot of community spread, and that makes it easier for this virus to keep spreading,” Ferrer said earlier this week. “So we’re all going to have to do everything we know how to do to contain the virus.”

“Please, do not go outside of your household to celebrate New Years Eve. If we don’t, then the beginning of 2021 will be worse than the ending of 2020,” said Dr. Ghaly.