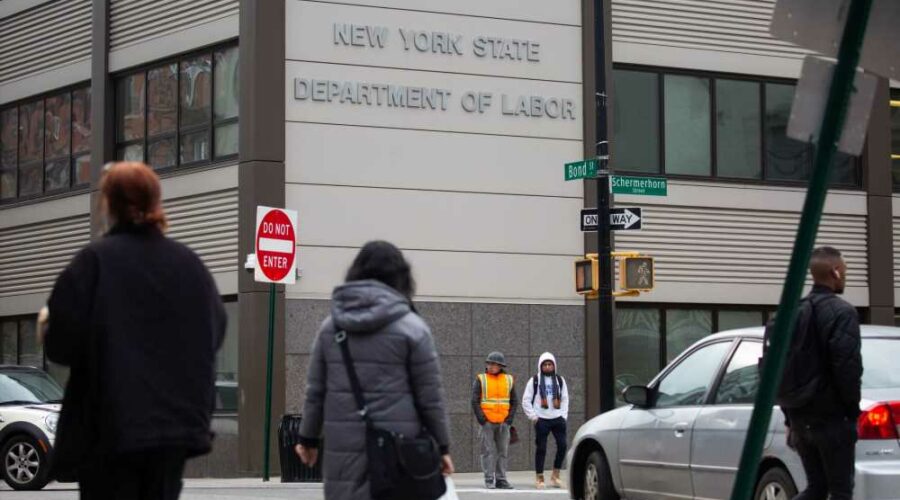 The Department of Labor released its weekly report on new jobless claims Thursday morning at 8:30 a.m. ET. Here were the main results from the report, compared to consensus estimates compiled by Bloomberg:

Initial jobless claims unexpectedly fell to a two-month low and dipped below 900,000 for a second straight week. Though initial claims spiked through most of December and January, they have started to come back down as states eased some restrictions put in place during the holiday COVID-19 spike in new cases.

“The data continue to signal weakness in the labor market, although a lack of sustained increases in recent weeks is a surprising and positive sign,” Rubeela Farooqi, chief U.S. economist for High Frequency Economics, wrote in a note on Wednesday. “As states continue to relax restrictions, claims should stabilize at lower levels.”

By state, new jobless claims in Illinois tumbled precipitously by 55,000 during the week ended Jan. 30, on an unadjusted basis. Kansas and Texas followed by a wide margin, with new claims last week in each of those states falling 8,500. California saw the greatest number of new claims last week at more than 46,000.

Continuing jobless claims, measuring the total number of Americans still receiving benefits via regular state programs, fell for a third straight week during the period ending Jan. 22. These continuing claims have come down sharply from a pandemic-era peak of nearly 25 million in May, but are still well above the 2019 average of 1.7 million per week.

The latest data showed that more than 17.8 million Americans were still claiming unemployment benefits of some form, with the majority of these comprising claimants on federal pandemic-era programs. Those on Pandemic Unemployment Assistance, which offers jobless insurance to gig workers and others who not qualify for regular state benefits, decreased by about 126,000 to 7.2 million for the week ended Jan. 16, the most recent date for which data is available. Those on extended Pandemic Emergency Unemployment Compensation decreased by about 290,000 to 3.6 million.

In Washington, lawmakers are pressing ahead with another virus relief package, which would likely extend these federal programs beyond their current mid-March deadline. The Senate narrowly voted on Tuesday to open debate for a budget resolution for the 2021 fiscal year, with an eye toward advancing additional coronavirus relief aid with a simple majority instead of the 60 votes needed for most legislation in the chamber.

For tutorials and information on investing and trading stocks, check out Cashay