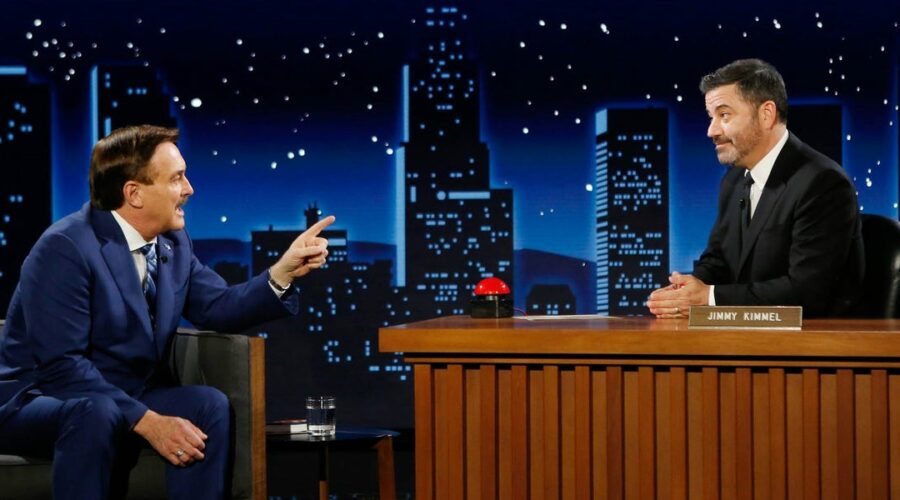 MyPillow CEO Mike Lindell made a much-anticipated appearance on late-night show host Jimmy Kimmel’s Wednesday night broadcast, where he doubled down once again on his voter-fraud claims.

On the Wednesday night episode of “Jimmy Kimmel Live,” Lindell and Kimmel discussed everything from his lawsuit’s against Dominion Voting Systems to Lindell’s malfunctioning social media platform, Frank.

“A lot of people, both liberals and conservatives, told me not to have you on. But I think it’s important that we talk to each other,” Kimmel said.

During a 20-minute conversation, Kimmel tried to get to the bottom of why Lindell became an ardent supporter of former President Donald Trump, and why he continued to claim that the election was stolen.

“So you started making pillows, made millions of dollars, then you fell in love with Donald Trump, and here you are. But let’s be honest, your website doesn’t even work that well, why would you believe that you’ve been given this evidence?” the host asked.

“All we need to do is look at the machines. Why won’t Dominion let the American people look at them?” said Lindell in response to Kimmel’s questions, parroting his earlier claims that voting-machine maker Dominion had tampered with the votes during the 2020 election.

He added once again that he was going to bring “evidence of a Chinese cyberattack” to the Supreme Court to overturn the election results.

Lindell’s repeated suggestions that a Chinese cyberattack “flipped” the 2020 elections and that Dominion voting machines broke at midnight on election night have been debunked.

In February filed a $1.3 billion lawsuit against Lindell over his voter-fraud conspiracy theories, but Lindell announced on April 19 that he was counter-suing Dominion for $1.6 billion.

Kimmel and Lindell also got personal when the host touched on Lindell’s recovery from his addiction to cocaine and “paranoia.”

“You’ve been in hiding, and you haven’t been home for a couple of months. Are you worried that someone is trying to kill you?” Kimmel asked.

Lindell vs Kimmel: “The obsession is mutual” 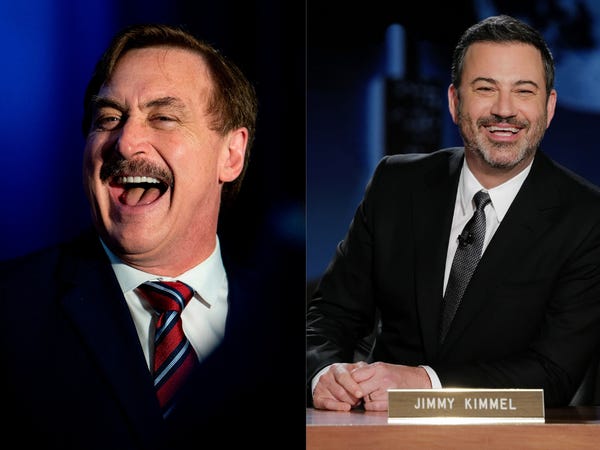 Lindell accepted Kimmel’s invitation to appear on the show after the two publicly exchanged barbs last week. In his monologue, Kimmel invited Lindell to come on his show, for an in-person interview in bed surrounded by pillows.

“Just me and Mike snuggled up side-by-side in a California King surrounded by sacks of goose feathers,” Kimmel said during last Wednesday’s episode. “What Mike Lindell doesn’t seem to understand is, I’m his biggest fan. I have no idea what he’s doing, but I love it.”

The two men have not had the best relationship, particularly after Kimmel made fun of Lindell’s attempt to start a social media site, Frank Speech, calling it a “world of paranoia and mustache wax” during his April 13 monologue. In the same monologue, Kimmel also poked fun at Lindell’s newly launched MyStore, which the CEO claimed would be a “patriotic” rival to Amazon.

During a 48-hour long “Frankathon” to promote his social media site, Frank Speech, Lindell angrily rebuked Kimmel about his comments on the social network’s launch and ranted about the jokes Kimmel cracked.

“He said I was on drugs and crack cocaine and all that stuff,” Lindell said on his livestream, also accusing Kimmel of being an addict himself. “He said I’m lucky I have all my teeth. Maybe you’re an addict too, Jimmy,” he said.

There is no evidence that Kimmel is an addict or recovering addict, but Lindell has not been shy about his past addiction to crack cocaine.

In response to Lindell’s segment on Frankathon, Kimmel aired snippets of Lindell’s rant during his Monday night monologue, remarking that the “obsession is mutual.”

29/04/2021 Business Comments Off on Jimmy Kimmel questions MyPillow guy Mike Lindell on voter fraud claims, asks why he believes he was 'chosen' to possess evidence of Chinese cyberattack
Markets