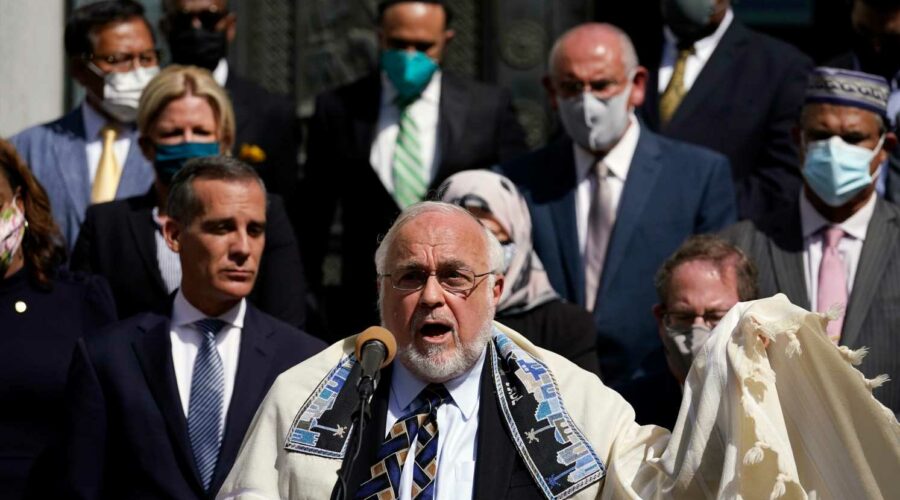 Five Jewish groups penned a letter to President Joe Biden on Friday expressing concern about the recent surge of antisemitic hate crimes in the U.S. amid the military confrontation between Israel and Hamas, which agreed to a cease-fire this week.

The American Jewish Community, the Anti-Defamation League, the Jewish Federations of North America, Hadassah and the Union of Orthodox Jewish Congregations of America called on the president to use his platform to condemn antisemitism and take a number of actions to combat anti-Jewish hate in the U.S.

“We are grateful for the current ceasefire in the conflict between Israel and the terrorist organization Hamas, but we fear that the way the conflict has been used to amplify antisemitic rhetoric, embolden dangerous actors and attack Jews and Jewish communities will have ramifications far beyond these past two weeks,” the groups wrote.

The cease-fire between Israel and Hamas took effect Thursday evening after both parties agreed to halt an 11-day military confrontation that left at least 230 Palestinians and 13 Israelis dead. Some 58,000 Palestinians have fled their homes, the Associated Press reported.

People reclaim valuable materials from a debris pile of a building destroyed by an airstrike prior to a cease-fire reached after an 11-day war between Gaza's Hamas rulers and Israel, in Gaza City, Saturday, May 22, 2021. (Photo: John Minchillo, AP)

The conflict has increased tensions in the U.S. – online and in person – between supporters of Israel and Palestinians. The Anti-Defamation League, a New York-based international Jewish organization, said it has seen a “dangerous and drastic surge” in antisemitic hate crimes since the conflict broke out.

“We are tracking acts of harassment, vandalism and violence as well as a torrent of online abuse,” Anti-Defamation League CEO Jonathan Greenblatt said in a statement Thursday. He added, “It’s happening around the world.”

The Anti-Defamation League said it has documented “disturbing antisemitism” on multiple social media platforms, including Facebook, Instagram, Twitter and TikTok. The group said its analysis of Twitter posts from May 7 to May 14 found more than 17,000 tweets used variations of the phrase, “Hitler was right.”

“ADL has also seen an increase in on-the-ground activity that demonizes Israel and that has crossed at times into antisemitism,” the group said in a statement.

Thousands of people have marched in major U.S. cities in recent weeks to protest Israel’s actions. The majority of protesters “have stayed within the lines of free and civil discourse,” but there have been “some expressions of clear antisemitism at these events,” the Anti-Defamation League said.

The group said it has documented “signs that invoke the age-old antisemitic accusation that Jews are responsible for killing Jesus” and “Holocaust analogies that demonize Zionists.”

Hate crimes are on the rise against communities of color. In 2019, they reached their highest level in more than a decade. Here’s why.

Last Sunday, two people shattered a window at a synagogue in Skokie, Illinois, according to local police, who are investigating the incident as a hate crime. Police said officers at the scene located a broken stick and a “Freedom for Palestine” sign on the ground beneath the window.

In Bal Harbour, Florida, police are investigating after a Jewish family said four men in an SUV hurled antisemitic slurs at them early last week.

Around the same time, someone smashed the front door of a synagogue in Tucson, Arizona, according to police.

In New York City Thursday evening, 26 people were arrested as pro-Israel and pro-Palestinian demonstrators clashed in Times Square, and police were investigating the assault of a Jewish man in the same area as a hate crime, officials said.

“The anti-Semitism we’re seeing across our country isn’t in isolation and isn’t just a few incidents. It’s part of a horrible and consistent pattern. History teaches us we ignore that pattern at our own peril,” Mayor Bill de Blasio said on Twitter Friday after meeting with Jewish community leaders at City Hall.

Authorities in Los Angeles, meanwhile, were investigating a pair of incidents, both of which involved a caravan of vehicles, this week as possible antisemitic hate crimes.

Palestine: Americans largely support Israel – but sympathy for Palestinians is on the rise

Rabbi Abraham Cooper, center, of the Simon Wiesenthal Center, speaks in front of civic and faith leaders outside City Hall, Thursday, May 20, 2021, in Los Angeles. Faith and community leaders in Los Angeles called for peace, tolerance and unity in the wake of violence in the city that is being investigated as potential hate crimes. (Photo: Marcio Jose Sanchez, AP)

The isn’t the first time the U.S. has seen a rise in antisemitic hate crimes following conflict in the Middle East, according to Brian Levin, director of the Center for the Study of Hate and Extremism at California State University, San Bernardino.

“Since national data collection began in 1992, the worst months of each decade revolved around disputes in the Holy Land or around conflictual elections,” Levin said.

In the 1990s, the month that saw the most antisemitic hate crimes in the U.S. was March 1994, following the Ibrahimi Mosque massacre, when an American-Israeli man fatally shot 29 people and wounded more than a hundred in the West Bank, Levin said.

In the 2000s, the worst month for antisemitic hate crimes in the U.S. was October 2000, during the Palestinian uprising against the Israeli occupation of the West Bank and Gaza. Over the last decade, however, the most hate crimes happened around the 2018 U.S. midterm elections, Levin said.

“This month, as violence in the Middle East escalated, that pause in antisemitic violence appears to be over,” Levin said.

Dozens of U.S. lawmakers have condemned the wave of antisemitic hate crimes. Rep. Grace Meng, D-N.Y., who has been vocal about the rise in hate crimes against Asian Americans and Pacific Islanders in the U.S., wrote on Twitter the “wave of anti-Semitic attacks against the Jewish community is disgusting & must not be tolerated.”

“An attack on one community is an attack on all of our communities,” Meng added.

In addition to the rise in antisemitic violence, Muslims in the U.S. have also been the targets of hate in recent weeks, and at least two mosques have been vandalized in what police are investigating as hate crimes.

Last week, worshippers arriving for morning prayers at a mosque in Brooklyn to celebrate the end of Ramadan found the words “Death to Palestine” spray painted on the entrance. And Monday, a religious flag was burned and graffiti was written on the base of a mosque on Long Island.

22/05/2021 Business Comments Off on Jewish groups sound alarm on rise in antisemitic hate crimes amid tensions between Israel, Hamas
Markets