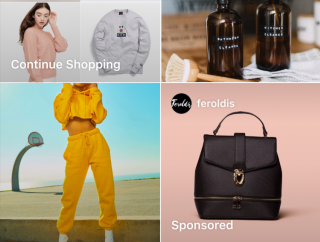 Instagram’s ad strategy has expanded: After officially hitting short-video feature Reels in a global rollout in June, the social media company’s advertising wing is spreading to its e-commerce business.

Starting Monday, the company is testing paid placements in Instagram Shops covering single images and optional image carousels in the U.S., with additional regions to follow. Test partners include brands such as Away, Boo Oh, Clairepaint, Deux, Donni Davy and Fenty Beauty.

According to the company, it’s not only looking to drive discovery to Shops, but to do so at the moment when consumers are in the mood to browse. Toward that end, advertisements will appear as tiles in the app’s Instagram Shop tab to capture users who are already there to peruse stores and products. Clicking on a tile takes the user directly to the product page.

Since they live on Shop tabs, which are only available on mobile devices, the ads are likewise mobile-only. They tie into Instagram and Facebook’s broader advertising model and so are subject to their bidding and auction system, which aims to balance levels and frequency of ads and relevant content.

The Cape Makes A Return On The Runway

“Online shopping has surged since the beginning of the pandemic, but social commerce specifically has been thrust into the spotlight,” Keith Nealon, chief executive officer of Bazaarvoice, told WWD.

According to the firm’s consumer survey, 85 percent of shoppers agreed that their time on social media has increased over the past 12 months and 72 percent agreed that they are more influenced to shop via social media now compared to pre-pandemic, he said.

Shopping on Instagram, specifically, jumped 200 percent, compared to pre-pandemic levels, and more than half of respondents said it was their top choice for shopping, at 54 percent. It was bested only by brands’ own websites, which came in at 77 percent.

Social commerce appears to be surging across the entire sector, with dramatic increases across TikTok, 567 percent; Pinterest, 250 percent, and Twitter, 300 percent.

Notably, the report singles out the beauty category as a winner in social commerce. Participants showed a preference for purchasing beauty products at 89 percent and health or wellness products at 42 percent on social media than from physical stores, compared to 35 and 24 percent, respectively.

Nealon noted that the rise in social shopping logically stems from consumers spending more time at home, online and on phones. But it’s also a reflection of social platforms’ growing priority on e-commerce, he added.

Clicking on a Shops ad take the user to the product page. Courtesy image

“Last summer, Instagram swapped out it’s ‘Activity’ tab for the ‘Shop’ tab, and their new move to include ads in the Shop tab is a no-brainer,” Nealon continued. For some critics, it’s a visual reminder of the company’s changing priorities, from artists’ resource and haven to business and revenue engine.

While it may alienate some creative types, the tech company has focused on its “creator community,” a distinct segment perhaps defined by people who create content specifically for the platform. Facebook and Instagram have been looking to give creators more ways to monetize their content, typically through commerce.

In June, the company said it will begin testing a native affiliate tool in the coming months, to give creators a new way to earn commissions by driving purchases on Instagram.

“As social platforms such as Instagram continue to make shopping easier, more accessible, more personalized and more attractive, the users will continue to turn into their consumers as well,” Nealon added.