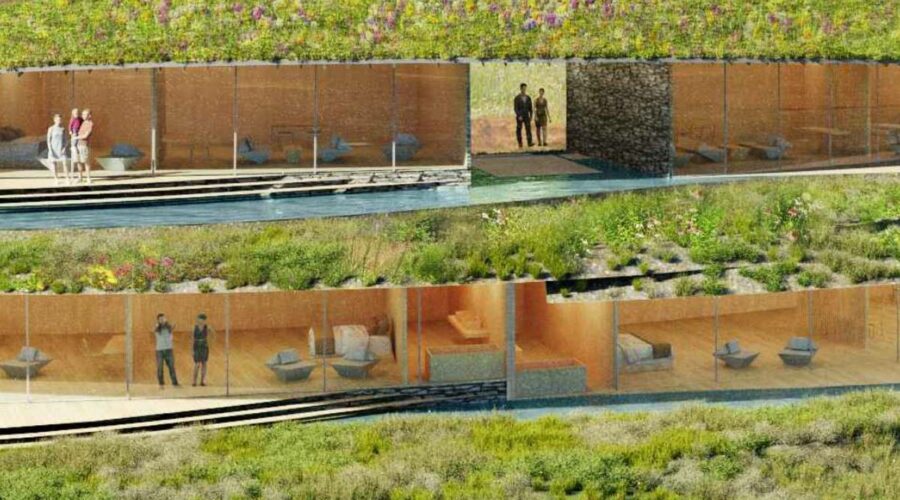 Buildings that appear almost buried into the landscape rather than constructed on top of it, curved and sloping rooftops dense with living foliage, hunkering down into the hills – that is what Facebook billionaire Peter Thiel’s long-awaited plans for his New Zealand lakefront site reveal.

They also look a bit like an ultra-modernist Hobbiton, people appearing beneath the earth behind floor-to-ceiling glass walls, tucked into the hills and land’s natural curves.

Thiel’s company Second Star has for some years owned the rural site yet not developed it.

Only this week was it revealed that the company he owns with Matt Danzeisen had applied to build a tourist lodge at Damper Bay off the Wanaka-Mt Aspiring Rd.

Thiel, now in his 50s, co-founded global online payments system PayPal, before becoming an angel investor in Facebook in 2004. A fan of The Lord of the Rings has named his companies Valar, Mithril and Palantir but he is also a Peter Pan fan, hence the name Second Star – the Second Star to the Right is a location featured in the 1953 animated feature film.

Architectural plans lodged with the Queenstown District Council have only this afternoon been accessible to anyone with an application number to log in.

There lies an insight into the inspiration behind the design by one of the world’s top architectural firms.

Japan’s Kengo Kuma & Associates took their cue from the lake, the mountains, the hills and the landform. The same business which designed Tokyo’s 68,000-seat Japan National Stadium for the 2020 Olympics held this year has turned towards the outstanding natural landscape here to bring its expertise to the breathtaking site.

Therein lies something very odd: the buildings appear so hidden in those plans, they hardly appear at first glance at all. That’s the whole idea.

Kengo Kuma wants structures to vanish beneath the area’s natural beauty, partly to fulfil resource consent demands in developing in the area of outstanding natural landscape but also just because it’s the right thing to do.

“We are inspired by the grand landscape and native materials in Wanaka,” the architects said in a preamble to their plans.

“Our objective is to design an organic architecture that fuses into the landscape and respect indigenous nature,” they said, citing views from a public walking trail.

Architecture configuration had been carefully studied to minimise exposure from the public trail while offering a panoramic view towards Damper Bay.

“The land-shaped roofs will gently slope down to minimise the elevated appearance and integrate with local vegetation reflecting the surrounding environment. We envision this organic architecture becomes part of the authentic Wanaka landscape,” Kengo Kuma says.

An owner’s cabin, guest cabins, an arrival area, spa, theatre lounge and a meditation area are all planned.

The lodge is proposed to have a pool, office, 10 guest rooms, entry foyer, employ around 20 staff, and comprise curved, low-lying buildings to blend seamlessly into the landscape and be minimally visible.

Buildings won’t be huge. For example, the gross floor area of the meditation building is a tiny 40sq m, equivalent to a tiny inner-city Auckland apartment, nicknamed shoeboxes.

The owner’s cabin isn’t that large either, at 565sq m.

Materials specified are wood and stone.

The facilities are planned to include lodge reception, guest bedrooms and bathrooms, kitchens and dining rooms, a library, a theatre lounge, offices and spa treatment rooms.

“The buildings have been designed to merge into the landscape and will be roofed with native grasses and vegetation, blending them into the surrounding hills, and the cladding will utilise low light reflective materials,” a statement out today said.

“No building will protrude above ridgelines, and the buildings will be difficult to see from public places. Kengo Kuma & Associates is noted for the use of materials natural to the local environment,” the statement said.

Second Star’s application will be notified, meaning anyone can have a say in it.

No bunkers appear on the plans which show the only structure fully beneath the ground as a “pool lounge” in the arrival area alongside reception, dining and spa facilities.