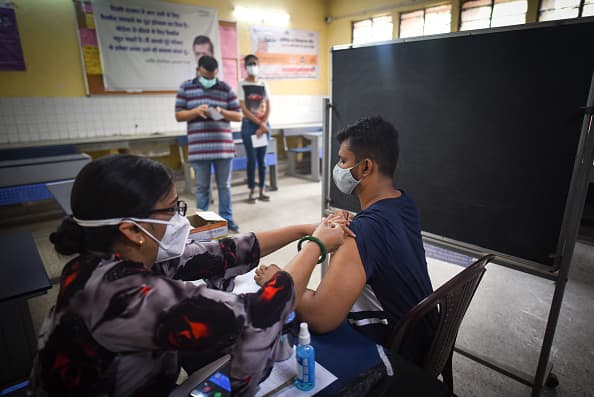 Government data showed there were 50,848 infections recorded over a 24-hour period on Wednesday, bringing the total reported cases to 30.02 million. The reported daily death toll was 1,358.

The United States is the only country in the world that has reported more cases than India.

The South Asian nation suffered a devastating second wave when reported coronavirus cases spiked between February and early May. It left hospitals overwhelmed and medical necessities like oxygen and medicines in short supply.

A highly contagious variant of the coronavirus — known as the delta variant — was first reported in India and is reportedly partially responsible for the rapid rise in cases there.

It has since spread rapidly around the world and is found in more than 80 countries. The World Health Organization said delta is becoming the dominant variant of the disease worldwide.

Last year, India's central government imposed a months-long nationwide lockdown to slow the outbreak that led to millions of people going out of work. This time, state governments imposed more localized restrictions to stem the spread of the virus.

The second wave also took a toll on rural India, which likely affected demand in the countryside despite a normal monsoon, Kundu said in a note this week.

Preparing for a third wave

Government officials, epidemiologists and other health experts say a third wave is inevitable, and some predict it could hit India by October.

In a Reuters poll of 40 health-care specialists, doctors, scientists, virologists, epidemiologists and professors from around the world, the consensus is that the third wave will be better controlled than the current wave.

Government confident India will have over 2 billion vaccine doses by December, minister says

While experts say that vaccination is the way forward for India, many caution against lifting restrictions too soon.

To date, less than 5% of India's total population has received two vaccine doses that are required to be considered fully inoculated — the vaccination rollout faced challenges this year including supply shortages.

Statistics compiled by scientific online publication Our World in Data showed that around 16% of the population has received at least one vaccine dose in India.

The country set an ambitious target of producing more than 2 billion Covid-19 vaccine doses by December — theoretically, that's enough to inoculate most of its population. But some public health experts say the vaccine target alone will not help immunize everyone.

They say the country needs to set up necessary infrastructure in rural India to roll out vaccination drives and convince people to get their shots as many, especially in the countryside, are still hesitant.

The central government has rolled out a campaign to vaccinate all adults for free and on Monday, reports said India gave out a record 7.5 million doses.

Reopening too soon is 'not prudent'

The decline in Covid-19 cases in recent weeks has prompted states to begin loosening restrictions, including the planned resumption of in-classroom teaching for schools and colleges. Some observers say the move can potentially backfire.

"Vaccination rates are far below the levels deemed to be safe for easing social distancing measures substantially in the more populous and economically important states," said Priyanka Kishore, head of India and Southeast Asia economics at Oxford Economics, in a Wednesday note.

She noted that partial restrictions are likely to stay in the coming months, but the reopening has started at a faster-than-expected pace.

"We think this reopening strategy is not prudent and may result in a renewed rise in infections and re-tightening of restrictions in the future," Kishore said. She explained that states with low vaccination rates could be forced to retighten measures to fight new coronavirus outbreaks, which could have spill-over effects that may force other states to step up restrictions again.

Oxford Economics remains cautious about the outlook and maintains its 2021 growth forecast for India at 9.1%.