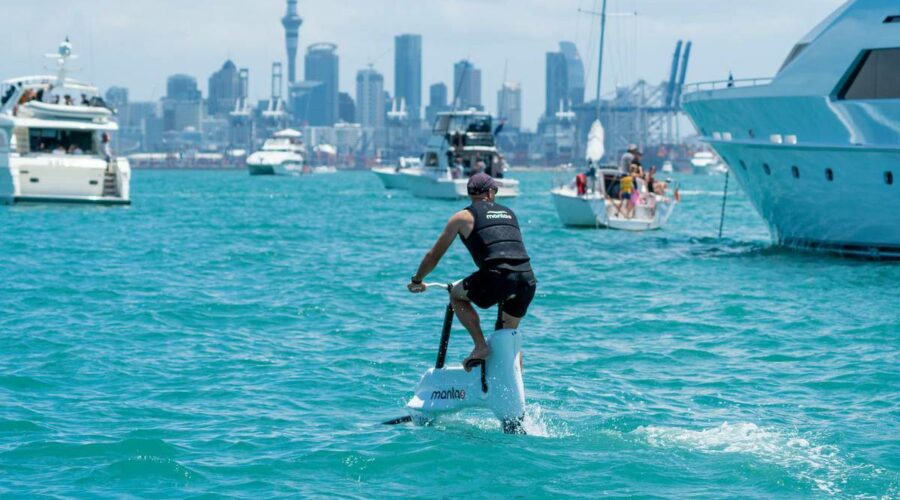 Hamilton startup Manta5 has revealed public listing plans and bumper first-year sales – but also a frustration with the Government’s vaccine rollout, or lack of, for exporters.

The hydrofoil e-bike maker will list on the ASX in 18 to 24 months, chief executive Mike Mark Robotham says.

In the meantime, it has just closed a $2 million “top-up” round ahead of a planned $6m Series B raise by the end of this year.

The company had revenue around $185,000 in 2019 with a pilot manufacturing run, Robotham says.

The company is on track to at least double that to $10m this year, the CEO says.

“We plan to hit $100 million in revenue in 2024 by releasing a range of water bikes that include competitive manual race models, electric-only speed ‘motorbikes’, and a surf model. The opportunity now lies in fuelling the growth of this new sport. Building a global product business is capital hungry the time has come to step out of the shadows as a business and widen up this great opportunity to the wider investment community,” Robotham says.

His long-term go is to position hydrofoiling e-bikes as an Olympic sport.

In the meantime, there are more meat-and-potatoes challenges.

Robotham says “2020 was a strange year”. On the one hand, Covid caused supply chain and shipping issues for Manta5, which uses contract manufactures in China and Taiwan. On the other, his company benefited as border closures helped drive a boom in wellness and lifestyle spending.

Pandemic issues continue today. Robotham says while his company has stock and can fill an order to an individual punter today, it was not able to fill large orders from hire operators. It will still deliver, but ideally the e-bikes would have been shipped months earlier.

The CEO is now scouting for manufacturing options in Europe, where Manta5 has made most of its sales to date. While it could prove more expensive, right now “lead-times trump cost” for impatient consumers.

Border closures have also hurt Manta5’s efforts to expand from 35 staff today to around 60. That’s a common theme with tech companies of all kinds (see the Herald’s new labour shortage series here). The decline of local manufacturing has led to fewer people with product development skills, leading to a reliance on immigrants.

And the pandemic has also weighed on export efforts. Manta5 is setting up a satellite office in Florida. The US economy is starting to wake up as the country puts lockdowns behind it, and Robotham wants to ride the coming boom. But setting up the office and signing new distributors requires travel. The CEO wants to sight new North American operations, and a lot of partners want to visit Manta5 here.

Robotham was hoping for jabs for himself and senior staff, given Manta5 is a fast-growing, emerging exporter. He even had the chance to pitch the idea to Trade Minister Damien O’Connor director. But he says O’Connor was not open to the concept of priority jabs for exporters (the minister did not immediately respond to a request for comment).

Back to the Tron

On the upside, the reverse brain drain has helped.

“While manufacturing and supply issues continue to be a major challenge, Manta5 has taken full advantage of returning international Kiwi talent, recently appointing Ian Calvert as product development manager and Will Wakeling as mechanical lead. They bring 40-plus years’ experience leading high-performance automotive product development at AVL, and fluids and thermal dynamics at Dyson.”

Manta5 is on track to get into the black in about a year, Robotham says, but could choose to delay that if it decides to push harder for growth. Either way, “There’s another year of heavy R&D spending ahead of us,” he says.

Why list across the Tasman? Robotham sees the ASX as “more amenable to product-based companies”. He says the decision was driven, in part, because Manta5 chairman Phil Norman has found the Australian exchange to be a “proven pathway”. The veteran tech investor formerly chaired Xero, which went ASX only (Xero), and is currently on the boards of Plexure, which recently shifted to a dual NZX-ASX listing, and Straker Translations which skipped the local exchange altogether in favour of listing across the ditch from the get-go.

Manta5 was founded by Howard-Willis with his son Luke, who founded the outdoor goods website Torpedo7 and daily-deal site 1-Day – both of which were acquired by The Warehouse Group in 2016 in a $65m deal. The father and son still hold a majority stake.

Minority investors include the Furniss family, which made its fortune selling blueberry agritech company BBC Technologies to Norway’s Tomra for $67m in 2018 and Glenn Miller, who made his money as a Hamilton Pak’nSave franchisee.

The Hydrofoil Bike was first conceived by Howard-Willis in 2010.

The entrepreneur joined forces with bike designer Roland Alonzo in late 2011, who had the skills to turn his idea into reality.

For two years they developed the bike in secret, and early prototypes were tested at night in a public swimming pool in Tauranga, before later graduating to test rides on Lake Karapiro.

How did a retailer like Howard-Willis come up with the idea of a Hydrofoil Bike?

The founder told the Herald the idea came to him in his sleep. He had a dream one night of pushing off from his pontoon in Pauanui and riding out onto the water on a bike-like object, riding next to dolphins. He woke up the next day and got started on making the vision a reality.