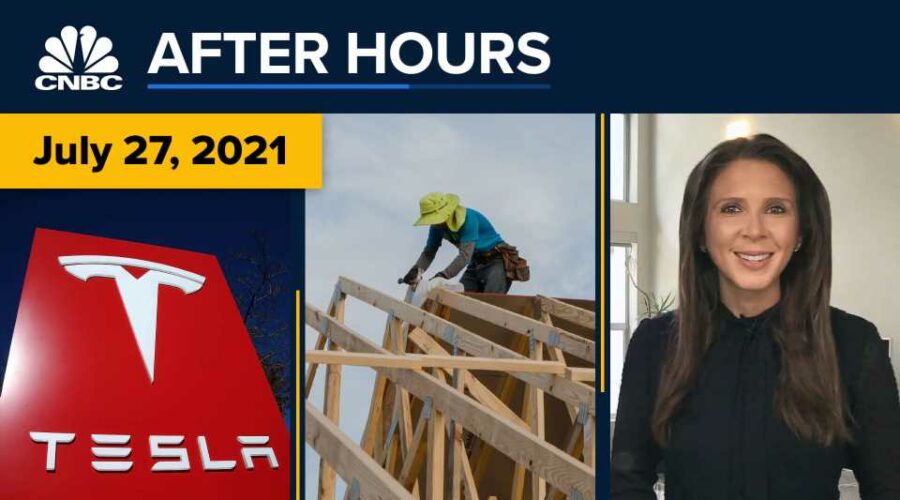 CNBC.com's MacKenzie Sigalos brings you the day's top business news headlines. On today's show, CNBC.com's Lora Kolodny explains Tesla's record-breaking quarter, and why it's so hard to know how the company's bitcoin holdings are performing. Plus, the barbecue market is heating up as companies rake in billions and make plans to go public.

Tesla reports more than $1 billion in net income during Q2, up tenfold from a year ago

Tesla reported second-quarter earnings after the bell Monday, and it's a beat on both the top and bottom lines. Shares rose about 2% after-hours.The company reported $1.14 billion in (GAAP) net income for the quarter, the first time it has surpassed $1 billion. In the year-ago quarter, net income amounted to $104 million.

Tesla had already reported deliveries (its closest approximation to sales) of 201,250 electric vehicles, and production of 206,421 total vehicles, during the quarter ended June 30, 2021.

Bitcoin briefly tops $40,000 for first time since June as cryptocurrency rallies after sell-off

Bitcoin surged above $40,000 for the first time in nearly six weeks on Monday as sentiment turned bullish following a recent sell-off.

Amazon on Friday confirmed it is looking to add a digital currency and blockchain expert to its payments team, suggesting it could be taking a closer look at bitcoin and other cryptocurrencies.

"Notwithstanding our interest in the space, the speculation that has ensued around our specific plans for cryptocurrencies is not true. We remain focused on exploring what this could look like for customers shopping on Amazon," an Amazon spokesperson said in a statement to CNBC.

Sales of newly built homes dropped in June to the lowest level since the early days of the coronavirus pandemic in April 2020, according to data released by the U.S. Census Bureau on Monday.

After a year of frenzied buying and price gains in the double digits, newly built homes are now out of reach for much of the demand that remains in the market.

The median price of a newly built home in June rose just 6% from June 2020, and while that is a large gain historically, it is nothing compared with the 15%-20% annual gains seen in previous months.

27/07/2021 Business Comments Off on How Tesla shrugged off a $23 million bitcoin loss last quarter: CNBC After Hours
Markets