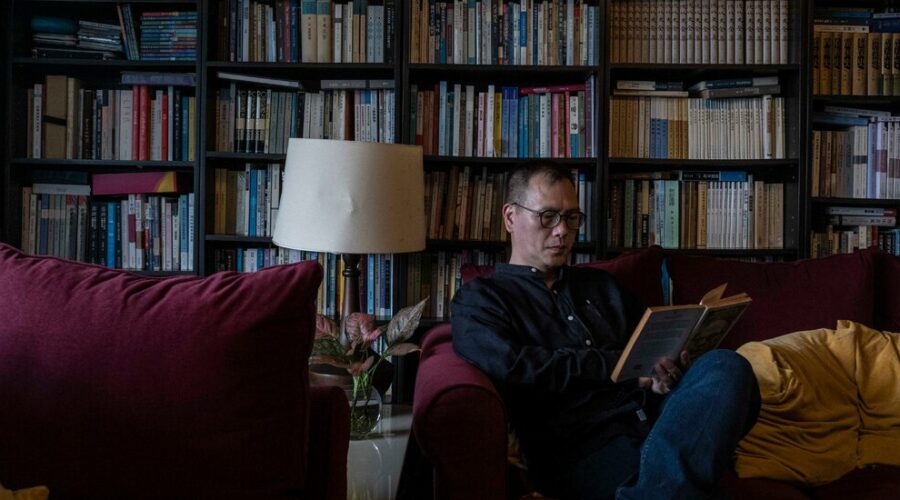 When taking a group photo with college students from mainland China, Hong Kong and Taiwan in 2012, Chow Po Chung, a prominent political philosopher, joked that he hoped none of them would end up in jail in 10 years.

The group erupted in laughter.

Mr. Chow, who teaches at the Chinese University of Hong Kong, had the mainland students in mind. He never expected that it would be two from Hong Kong who would end up in jail nearly a decade later.

A year after Beijing imposed a sweeping national security law on the territory to crush opposition to the ruling Communist Party, visiting friends and former students in prison has become part of his routine.

A best-selling author and a public intellectual whose passionate books and speeches have influenced many young Hong Kong pro-democracy activists, Mr. Chow said the security law had turned his life upside down.

He is sad, angry, guilty, depressed — at times proud and hopeful. He struggles with whether he should still encourage his students to be active participants in public affairs since it could lead to job loss and jail time. He has to remind himself not to let fear creep into his life, such as self-censoring in the classroom. At the same time, he has to evaluate the risks he’s taking and the limits he could push.

His psychological trauma and moral dilemma provide a window into a city of seven million people that has experienced a precipitous fall from a relatively free and defiant community to one that has been ruled by authoritarianism over the past year.

Hong Kong has endured too much injustice, he said, making the city increasingly unfamiliar. “The whole city’s core values have collapsed,” he said. “They’ve been destroyed.” 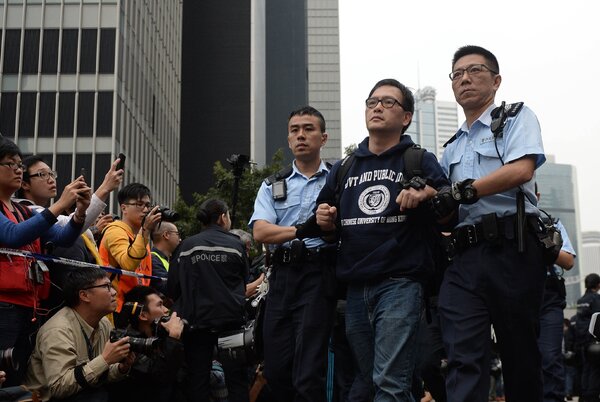 Mr. Chow has been deeply involved in the city’s pro-democracy movement. As a high school student, he protested the Tiananmen crackdown in 1989. He taught John Rawls’s “A Theory of Justice” on the site of the 2014 Umbrella Movement and was arrested briefly on the last day of the pro-democracy protest. He went to many demonstrations in 2019 as an observer, watching as Beijing cracked down ruthlessly. All of them failed, and the security law was the final blow.

“The things that should not have happened in a normal society happened,” he said in an interview at his home on the campus of the Chinese University of Hong Kong. “I’m talking about the most outstanding people, the kind of people that should be held up as role models, are being attacked and sentenced to jail.”

For two decades, Mr. Chow encouraged his students to examine the meaning of life and become active and conscientious citizens who help build societies based on values such as justice and liberty.

I asked whether he taught the same thing now. He paused for nearly a minute and opened his mouth several times before saying he had stopped telling his students to be active participants.

“Of course, I still tell them to care about the society and be responsible for their lives,” he said. “But it’s no longer easy to tell them what they should do because participating in political and public affairs has become a highly risky act.”

Mr. Chow has enjoyed the kind of opportunities and freedom Hong Kong used to offer to its residents. Born in the southern province of Guangdong, he migrated to the former British colony in 1985 at the age of 16. His family lived in a poor neighborhood in Kowloon, but he thrived academically and enrolled in the Chinese University of Hong Kong.

He began teaching at his alma mater in 2002 and became one of the most popular professors, known for his passionate and highly engaged classes.

One of his students, Michael Ngan, said he was influenced by Mr. Chow’s teaching, especially the Socrates dictum he likes to cite, “An unexamined life is not worth living.”

Such philosophy prompted Mr. Ngan to make an important life decision this year. He’s one of the 129 civil servants who resigned after refusing to pledge allegiance to the Hong Kong government, believing that the request infringed on their freedom of speech.

“His teaching enlightened me,” Mr. Ngan said. “Teacher Chow taught us that we’ve got only one life to live and should make the most out of it.” Though, he emphasized, Mr. Chow never urged his students to be political.

Such sacrifices sadden Mr. Chow. They also inspire him. “Many people are using different means to guard the soul, the values and the dignity of this city,” he said.

He’s proud that many residents continue to protest with their wallets by shopping at stores owned by pro-democracy activists and by donating to a humanitarian fund for the 2019 demonstrators who need medical treatment and legal representation.

But it’s increasingly difficult to remain hopeful. Many days in the past year started with bad news. The day before our meeting in early May, four pro-democracy activists were sentenced to prison for taking part in an unauthorized assembly last year. One of them is Lester Shum, a former student.

To show his support, Mr. Chow goes to court hearings and visits people like Mr. Shum in jail. He found that prisons can be very different. The women’s prison where Chow Koot-yin (not related), another former student, was jailed looks almost like an office complex. Another, where the activist Gwyneth Ho is waiting to be sentenced, looks stern, with high walls.

The most surreal one is the men’s prison in Stanley, an upscale neighborhood in the southern tip of Hong Kong island. More than 30 political activists, including the Apple Daily newspaper tycoon Jimmy Lai, are jailed there. Visitors walk past beautiful mansions before reaching the facility. Some mornings the waiting room looks like a social gathering, with visitors holding coffee from a vending machine and chatting for hours.

“It was both absurd and sad,” Mr. Chow said. “It feels almost like a scene out of a movie.”

His online life has also changed a lot. His 45,000 Facebook followers used to post photos of their travels and meals. Not much any more. “The city has been suffering,” he said. “People feel guilty about enjoying life.”

His Facebook timeline is also a barometer of fear. When the security law took effect a year ago, Mr. Chow saw that some of his followers changed their names into pseudonyms or deleted their timelines while others closed their Facebook accounts altogether so that the authorities couldn’t prosecute them because of their posts. Now his timeline is full of names he doesn’t recognize.

Even Mr. Chow’s own Facebook timeline has changed. He mainly reposts other people’s posts instead of writing original ones because, he said, he doesn’t know how to talk about his pains.

He has barely written any articles, let alone a book. His last book, published in June 2019 amid a whirlwind of protests, was “Our Golden Times.” When I asked whether he would use the same title now, he paused for another very long moment. Likely not, he answered. “It’s probably the beginning of our worst times.”

Learning to live with fear is the hardest. Mr. Chow admitted that he had thought about whether he should choose his words more carefully at classes and whether to accept my request for an interview.

“I tell myself not to let self-censorship become the police in my heart,” he said, “and not to let fear control my life and my thinking.”

Despite the enormous adversity, Mr. Chow believes that as long as the people keep fighting back, it will not be the end of the story for Hong Kong.

After the police banned the annual vigil for the Tiananmen massacre for the second year, the democracy advocates tried new ways — including lighting candles and shining cellphone lights — to observe it.

“I don’t know what Beijing was like after the 1989 Tiananmen crackdown,” he said. “But after the national security law, after the many arrests, after all the setbacks, suppression and trauma, the spirit of defiance still persists in Hong Kong.”