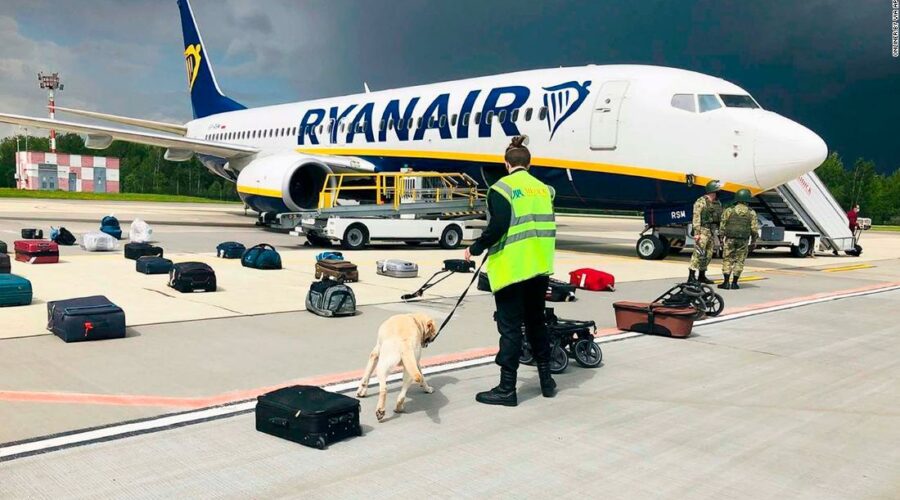 (CNN)International condemnation was growing Monday after the authoritarian leader of Belarus diverted a Ryanair flight to Minsk in order to arrest a dissident journalist, in what the airline’s boss described as a “state-sponsored hijacking.”

Some European leaders variously called for airlines to avoid Belarusian airspace, their citizens to leave the country, and for the release of opposition activist Roman Protasevich.
Protasevich was traveling on Ryanair flight 4978 from Athens, Greece to Vilnius, Lithuania on Sunday when shortly before touchdown the plane was diverted by Belarusian air traffic control to the capital Minsk over a supposed security alert.

Ryanair’s CEO Michael O’Leary accused Belarus of “state-sponsored piracy,” telling Newstalk radio Monday that he believed Belarusian KGB agents were also on the flight that was carrying 26-year-old Protasevich, who is wanted in Belarus on a variety of charges.

Similarly, Irish Foreign Minister Simon Coveney said that secret service agents may have been on the plane, telling Ireland’s RTE that the agents were “clearly linked to the Belarusian regime.”

“When the plane landed, either five or six people didn’t reboard the plane before it took off again, but only one or two people were actually arrested, so that certainly would suggest that a number of the other people who left the plane were secret service,” he added.
Belarus borders three European Union member states — Latvia, Lithuania, and Poland — and EU leaders were discussing further action against the government of Belarusian President Alexander Lukashenko on Monday.

Lithuania ordered all flights to and from its airports to avoid Belarusian airspace from early Tuesday, an adviser to the transport minister told CNN, and the foreign ministry urged its citizens to leave Belarus, citing “risks to the security and a threat to the lives of civilians.”
The flag carrier of Latvia, airBaltic, said it had “decided to avoid entering Belarus airspace until the situation becomes clearer or a decision is issued by the authorities.”
Scandinavian Airlines (SAS) also said in a statement on Monday that it would reroute its twice weekly flights between Oslo and Kiev, the capitals of Norway and Ukraine, in line with instructions from the Swedish transport agency.
In the United Kingdom, transport secretary Grant Shapp said he had instructed the country’s aviation authorities to “request airlines avoid Belarusian airspace in order to keep passengers safe.”
Polish Prime Minister Mateusz Morawiecki said he would be calling for all flights between EU member states and Belarus to be suspended, Reuters reported. And German Foreign Minister Heiko Maas called for the immediate release of Protasevich and requested information about the activist’s welfare. 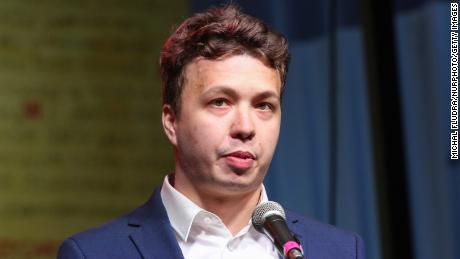 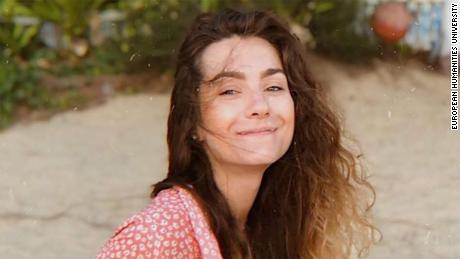 Soon after the plane landed, Protasevich was arrested along with Sofia Sapega, a Russian student he was traveling with.
Protasevich is one of dozens of Belarusian journalists and activists campaigning in exile against strongman Lukashenko’s 26-year rule. Protasevich is the founder of the Telegram channel Nexta, which helped mobilize anti-Lukashenko protests, and was charged last year with “organizing mass riots and group actions that grossly violate public order.” He is on a government wanted list for terrorism.
When the pilot announced that the plane would be diverting to nearby Minsk, Protasevich reacted immediately, standing up from his seat, reaching into the overhead locker, pulling a laptop computer from his hand luggage and passing it to a female companion along with his mobile phone, witnesses told Reuters.
“When it was announced they were going to land in Minsk, Roman stood up, opened the luggage compartment, took luggage and was trying to split things,” said a Lithuanian passenger, who gave his name only as Mantas, Reuters reported.
“I think he made a mistake. There were plenty of people so he could give the things to me or other passengers and not the girlfriend, who was also I think arrested.” 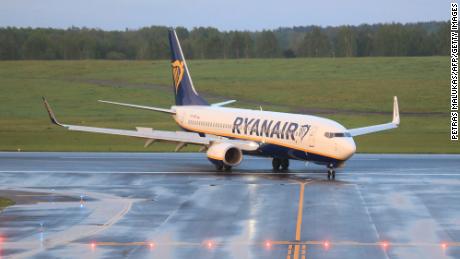 Other passengers said Protasevich looked scared and said he feared would face the death penalty. Marius Rutkauskas was sitting behind Protasevich, and told Lithuania’s state-owned LRT TV that passengers were initially told the plane would be landing in Minsk due to a technical fault.
“A man sat with his girlfriend and you could see that he started to panic. As I understood, this was the journalist. He panicked because we would be landing in Minsk. He said that the death penalty awaits him in Belarus,” Rutkauskas said.
Similarly, passenger Monika Simkiene told AFP that Protasevich “just turned to people and said he was facing the death penalty.”
There are conflicting accounts on why the plane changed course last minute. Ryanair says that its crew was “notified by Belarus ATC [air traffic control] of a potential security threat on board and were instructed to divert to the nearest airport, Minsk” — even though the plane was closer to Vilnius than Minsk when it changed course. airport
Meanwhile the Deputy Commander of Belarus’ Air Defense Forces, Major-General Andrey Gurtsevich, claimed that after the Ryanair crew were told of a “possible bomb on board,” it was the captain who “made a decision to land at the reserve airfield (Minsk-2).”
Gurtsevich said a Belarus Air Force MiG29 jet was dispatched to monitor the flight and “assist” if necessary.
The Belarusian government’s version of events has been met with widespread disbelief, despite an elaborate show of fire trucks when the plane landed, as well as extensive baggage checks. Nothing untoward was found, according to Ryanair. 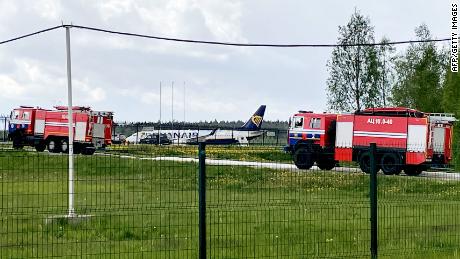 Protasevich and Sapega were arrested and detained on arrival in Minsk. Student Sapega was preparing to defend her International Law and European Law master’s thesis in Vilinus, according to the European Humanities University (EHU).
“The student was detained by the Administration of the Investigative Committee for the city of Minsk on groundless and made-up conditions,” the EHU said in a statement.
On arrival, Protasevich’s luggage was checked and sniffer dogs were deployed, but turned up nothing, Reuters reported.
“We saw that Roman was stopped due to some things in the luggage,” passenger Mantas told Reuters, adding that the other passengers also had their luggage checked and were taken by bus to the terminal where they spent several hours waiting to reboard the plane.
“We saw from the window that Roman is standing alone, and one policeman with dog was trying to find something (in his luggage).”
Another passenger, who also did not give his name, told Lithuanian media that Protasevich had identified himself to Belarusian security officials on arrival. “I saw how his passport was taken away. He took off his mask and said: ‘I’m so-and-so and I’m the reason why all this is going on.'”

The incident has been condemned by world leaders. European Commission President Ursula von der Leyen said in a tweet, “The outrageous and illegal behaviour of the regime in Belarus will have consequences. Those responsible for the #Ryanair hijacking must be sanctioned. Journalist Roman Protasevich must be released immediately.”

US Secretary of State Antony Blinken condemned the incident Sunday and demanded the release of Protasevich. “This shocking act perpetrated by the Lukashenka regime endangered the lives of more than 120 passengers, including U.S. citizens,” Blinken said in a statement. “Initial reports suggesting the involvement of the Belarusian security services and the use of Belarusian military aircraft to escort the plane are deeply concerning and require full investigation.”
But Belarus has said western countries are acting “hastily” by making “belligerent” statements about Sunday’s incident. Foreign ministry press secretary Anatoliy Glaz told Russian state media RIA Novosti that a “number of countries” and the EU were making “deliberately politicized, unsupported accusations,” and said those nations have “no apparent desire to understand it objectively.”

Glaz defended Belarus’ actions on Sunday as “fully justified,” in order to ensure the safety and security of the passengers and crew. “There is no doubt that the actions of our competent authorities were also in full compliance with the established international rules,” he said
Russia, a key ally of Belarus, said it would not be commenting on the diverted fight. Kremlin spokesman Dmitry Peskov said in a conference call with journalists Monday that it was for international aviation authorities to determine whether Belarus was compliant with regulations.
Source: Read Full Article