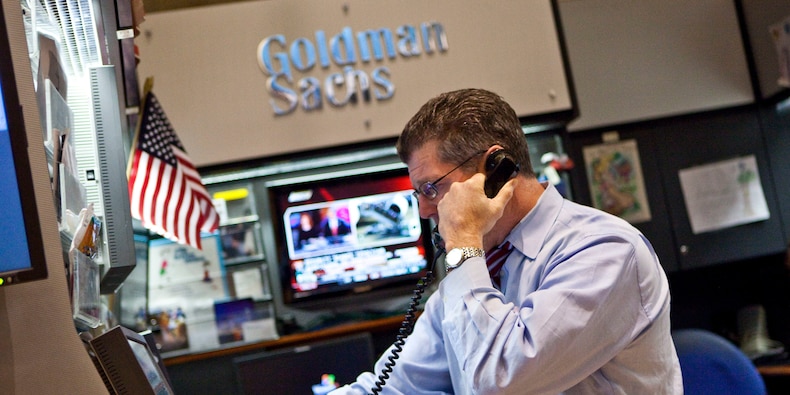 Strong trading and investment banking income helped drive results for the bank, as did a decrease in the bank's lending reserves. Goldman shed $70 million from its loan-loss reserves through the first quarter of the year as COVID-19 vaccines begin to enable an economic reopening in the US.

Goldman shares jumped as much as 2% in Wednesday morning trades.

Here are the key numbers:

"We have been working hard alongside our clients in preparation for a world beyond the pandemic and a more stable economic environment. Our businesses remain very well positioned to help our clients reposition for the recovery, and that strength is reflected in the record revenues and earnings achieved this quarter," Goldman Sachs CEO David Solomon said in a statement.

Goldman's equities revenue reached $3.7 billion in the three-month period, up 68% from the first quarter of 2020. The bank relies more heavily on its trading desks and deal advising business than other banks. Accordingly, the record highs reached in the stock market during the quarter was a positive for Goldman.

Fixed-income sales and trading brought in $3.9 billion for the bank, which was up 31% from the year-ago period. Investment banking revenue climbed to a record $3.8 billion as a boom in equity and debt offerings continued.

The first quarter results included the "immaterial" losses Goldman said it experienced after it unloaded its equity exposure to Bill Hwang's Archegos Capital, which wiped out $20 billion in value after extreme leverage forced a margin call it was unable to meet last month. Other banks like Credit Suisse and Nomura experienced billions of losses tied to the Archegos liquidation, and JPMorgan estimates that the total losses experienced by banks could be $10 billion.