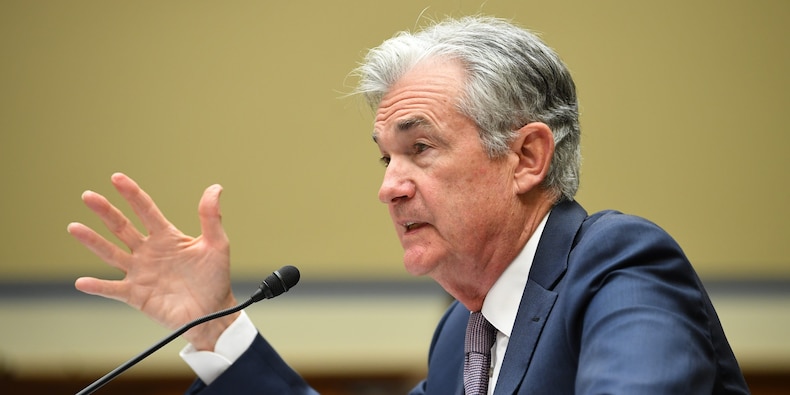 In the US, futures for the benchmark S&P 500 stock index fell 0.44%, while Dow Jones futures were off by 0.46%. Futures for the tech-heavy Nasdaq 100 fell 0.49%, as investors reconsidered the value of many fast-growing firms in light of higher bond yields.

Bond yields, which move inversely to prices, flatlined in European trading after spiking overnight. The yield on the key 10-year US Treasury note fell 0.1 basis points to 1.549%, after touching 1.583%. It stood at 0.92% at the start of the year.

Yields on government bonds are rising as investors expect stronger growth and inflation, and so demand higher returns on investments.

Yet the rise has knocked stock markets – which boomed, as ultra-low yields sent investors looking for strong returns in the equity markets that now look less attractive.

Fed chair Powell signaled on Thursday the central bank is happy keeping policy as it is for the time being.

Investors took Powell’s words to mean that the Fed was fine with yields rising further. That hit stocks again, with the Nasdaq 100 closing 1.73% lower, turning negative for the year, and the S&P 500 slipping 1.34%. The Dow Jones, which features more stocks that stand to benefit from strong economic growth and inflation, slipped 1.11%.

“Inflation concerns and a continued rotation out of growth stocks is beginning to weigh on equity markets,” said Richard Hunter, head of markets at Interactive Investor.

“The perceived threat of higher interest rates arriving earlier than expected washed through to the shares which could be most obviously affected by the resultant slowing of profits.”

Bitcoin slid 6.5% to $46,940. Analysts said it had fallen victim to the broader market worries.

Investors will be focused on US jobs figures for February, which come out 8.30 a.m. ET. Analysts think payrolls likely increased by 182,000 jobs last month after climbing by 49,000 in January, according to a Reuters poll.