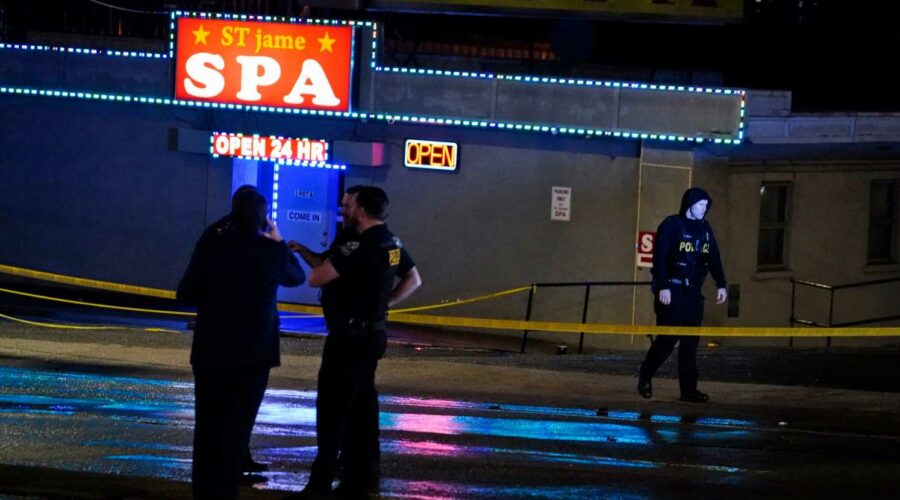 The three shootings on Tuesday that killed eight people, six of them Asian women, has dramatically increased the sense of fear in the Asian community, which has already been experiencing an increase in violence and hate incidents.

Police arrested a suspect but have not determined the motive for the shootings at three massage parlors in the Atlanta area on Tuesday night. At least four victims were of Korean descent, South Korea’s Foreign Ministry said in statement Wednesday. Authorities also told the Atlanta Journal-Constitution that six of the eight victims appeared to be Asian women.

Cherokee County Sheriff Frank Reynolds said at a press conference Wednesday investigators asked the suspect if shooting was racially motivated and “that did not appear to be the motive.”

Community leaders and experts say a series of violent attacks earlier this year and a rise in hate incidents is fueled by racist rhetoric about the coronavirus pandemic.

“This latest attack will only exacerbate the fear and pain that the Asian American community continues to endure,” said Stop AAPI Hate, a group that documents anti-Asian hate and discrimination, in a statement.

“Not enough has been done to protect Asian Americans from heightened levels of hate, discrimination and violence. Concrete action must be taken now. Anything else is unacceptable.”

Law enforcement officials confer outside a massage parlor following a shooting on Tuesday, March 16, 2021, in Atlanta. Shootings at two massage parlors in Atlanta and one in the suburbs have left multiple people dead, many of them women of Asian descent, authorities said Tuesday. (Photo: Brynn Anderson, AP)

U.S. Rep. Ted Lieu, D-Calif., offered his condolences to the victim’s family’s on Twitter, highlighting that the shootings occurred during a spike in anti-Asian violence. Lieu said racist phrases used by the former president “inflamed discrimination against the Asian American community.”

“Was this a hate crime? We need more evidence,” Lieu said on Twitter. “But we do know the alleged murderer targeted three locations where the victims would disproportionately be Asian women.”

Stop AAPI Hate, which includes a self-reporting tool for harassment, discrimination and violent attacks, recorded 3,795 incidents of anti-Asian discrimination across the U.S. from its inception on March 19 to Feb. 28, 2021, according to data released Tuesday before the Georgia shootings.

Women report hate incidents 2.3 times more than men and Koreans are the second largest ethnic group that report experiencing hate, according to the new data.

Hate crimes against Asian Americans are on the rise: Here’s what activists, lawmakers and police are doing to stop the violence

The FBI collects national hate crime data, but data for 2020 and 2021 has not yet been released. In 2019, 216 anti-Asian hate crimes were reported, according to the latest data available.

That number may be just a fraction of the true total given that fewer than half of the victims of a hate crime ever report it to the police, according to data from the Bureau of Justice Statistics.

In Georgia, 32 anti-Asian hate incidents were reported between March 20 and Oct. 28, 2020, mirroring the nationwide trend, according to Stop AAPI Hate.

Georgia was one of only a handful of states without hate crimes laws until Gov. Brian Kemp signed legislation in June imposing additional penalties for crimes motivated by bias and mandating data collection on hate crime incidents in the state. Kemp signed the legislation weeks after Black jogger Ahmaud Arbery was shot by armed white men in what many called a modern-day lynching.

Asian Americans have been victims of increased violence and harassment since the coronavirus pandemic began, but recent attacks have prompted some to "hunker down" again.

In San Jose on Feb. 3, a 64-year-old Vietnamese woman was assaulted and robbed of $1,000 in cash she had withdrawn for Lunar New Year. No arrest has been made, and there is no indication the robbery was race-related, public information officer Sgt. Christian Camarillo said.

In New York that same day, 61-year-old Noel Quintana, who is of reportedly Filipino descent, was slashed in the face with a box cutter on the subway. Quintana told the Washington Post a suspect has been arrested and charged with assault. Spokesperson Detective Denise Moroney told USA TODAY the NYPD’s Hate Crime Task Force is investigating this incident as a possible bias crime.

In San Francisco on Jan. 28, Vicha Ratanapakdee, a Thai man, was attacked and later died. Eric Lawson, his son-in-law, told USA TODAY last month he believes the 84-year-old was targeted because he was Asian. Lawson added that his wife, who is Thai, was verbally assaulted twice and told to “go back to China” before the attack.

“Everyone is dancing around the issue, and no one’s addressing it,” he said.

Although it’s unclear whether these particular cases are racially motivated, they are certainly “related” and “horrific,” Jeung told USA TODAY last month.

“What makes it worse is we see our elderly and youth also targeted,” he said. “It seems like people are attacking vulnerable populations.”

This group of 700 volunteers is taking action: A string of attacks against Asian Americans rattles California’s Bay Area

“At this very moment, so many of them, our fellow Americans, are on the frontlines of this pandemic trying to save lives,” Biden said. “And still, still they are forced to live in fear for their lives just walking down streets in America. It’s wrong, it’s un-American and it must stop.”

Biden signed a memorandum in late January denouncing xenophobia and violence against Asian Americans and Pacific Islanders. Lawmakers from the Congressional Asian Pacific American Caucus, a group of lawmakers representing the interests of Asian Americans, have requested a meeting with the administration to discuss the orders’ implementation, though the meeting has not yet been scheduled.

Democratic lawmakers plan to introduce a new bill addressing the rise in hate incidents directed at Asian Americans amid the pandemic. The bill, a revised version of legislation introduced but not passed in the last Congress, would create a new position at the Department of Justice to facilitate the review of hate crimes and provide oversight of hate crimes related to COVID-19.

This Thursday, the House Judiciary Subcommittee on Constitution, Civil Rights and Civil Liberties will hold a hearing on “Discrimination and Violence Against Asian Americans.”

John C. Yang, president and CEO of Asian Americans Advancing Justice-AAJC who is expected to testify before the subcommittee, said on Twitter that the hearing “became even more important,” Tuesday night.

“Our community needs to feel protected, and policymakers must hear and address our concerns,” he said.