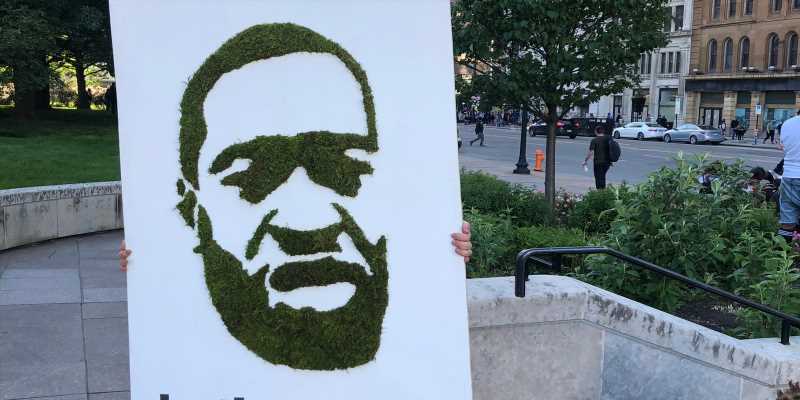 Like millions of Americans, George Floyd lived with the torment of drug addiction.

He and his girlfriend, Courteney Ross, became addicted to opioids four years ago after they were both prescribed for chronic pain. When the prescriptions ran out, they turned to illegal drug use, she said. They tried to go clean, then failed. They tried again, but could not stop for long.

As the COVID-19 pandemic spread across the United States, Floyd, the father of two young daughters, started using again: he lost his job as a nightclub security guard because of quarantine shutdowns, he was hospitalized for several days after an overdose, he found out he had the coronavirus. On the day he died, his neck trapped under the knee of former Minnesota police officer Derek Chauvin for m, he had fentanyl and methamphetamine in his system, toxicology reports later showed.

“We got addicted and tried really hard to break that addiction many times,” Ross said tearfully Thursday during testimony in the Chauvin trial over Floyd’s death.

Floyd’s death helped launch a global civil rights movement over racial injustice and police violence. The trial over his death could similarly shape how Americans view drug addiction at a time when Black people continue to overwhelmingly be denied medical treatment compared to white Americans even as they suffer from disproportionately high rates of fatal opioid overdoses. 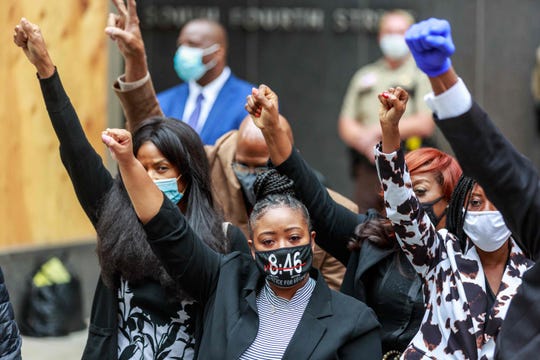 George Floyd's family raise their hands as attorney Ben Crump (out of frame) speaks at a press conference outside the family justice center after a court hearing on the murder of George Floyd on Sept. 11, 2020, in Minneapolis, Minnesota. Four police officers accused of contributing to the death of George Floyd, the 46-year-old African-American man whose death in May sparked nationwide protests, appeared together in Minneapolis court for the first time that day. (Photo: KEREM YUCEL, AFP via Getty Images)

Chauvin’s defense attorney, Eric Nelson, has sought to persuade jurors that drugs – not Chauvin’s knee clamping down on Floyd’s neck as he cried “I can’t breathe” while handcuffed on the ground – contributed to Floyd’s death.

Prosecutors, family members and medical experts have said Floyd’s history of addiction does not explain how he died. Chauvin, who is white, is charged with second-degree murder, third-degree murder and second-degree manslaughter in the death of Floyd, a 46-year-old Black man.

“George was walking, talking, laughing, and breathing just fine before Derek Chauvin held his knee to George’s neck,” Ben Crump and Antonio Romanucci, lawyers for Floyd’s family, said in a statement Thursday morning. “Tens of thousands of Americans struggle with self-medication and opioid abuse and are treated with dignity, respect and support, not brutality.”

Drug use has been used to justify the death of other Black people who have been killed by white police officers, including Michael Brown in Missouri, said Dr. Scott Nolen, director of the Addiction and Health Equity program at the Open Society Institute–Baltimore, which works to reduce drug addiction. Racism makes it so people of color who use drugs are wrongly seen as “throwaways,” he said.

The Chauvin defense “really sheds light on how people of color, Black people, are treated when they have an addiction. What they are failing to do is treat George Floyd as a whole person,” said Johnson. “The fact that he used drugs is not why he died. He died because he was a big Black man and a white man did not value his life.”

The notion of treating drug addiction as a medical condition and not a moral failing became more widespread in the 2000s based on emerging research and as prescription opioid pain relievers became popular and thousands of white people began to die from overdoses.

Unlike previous drug crises that primarily hurt low-income Americans and people of color, victims of opioid drug addiction were often portrayed by lawmakers and the media as ordinary white Americans who had fallen prey to a highly addictive substance.

“One of the first things you notice is that when drug addiction, in particularly opioid addiction, became seen as a white drug problem, suddenly people were deeply interested in the origin of your drug addiction, they were interested in origin stories that made you not responsible,” said Ekow N. Yankah, a criminal law expert and professor at Cardozo School of Law in New York City. “Those origin stories were never available to Black people, in particular Black urban dwellers. No one cared why you got hooked on drugs.” 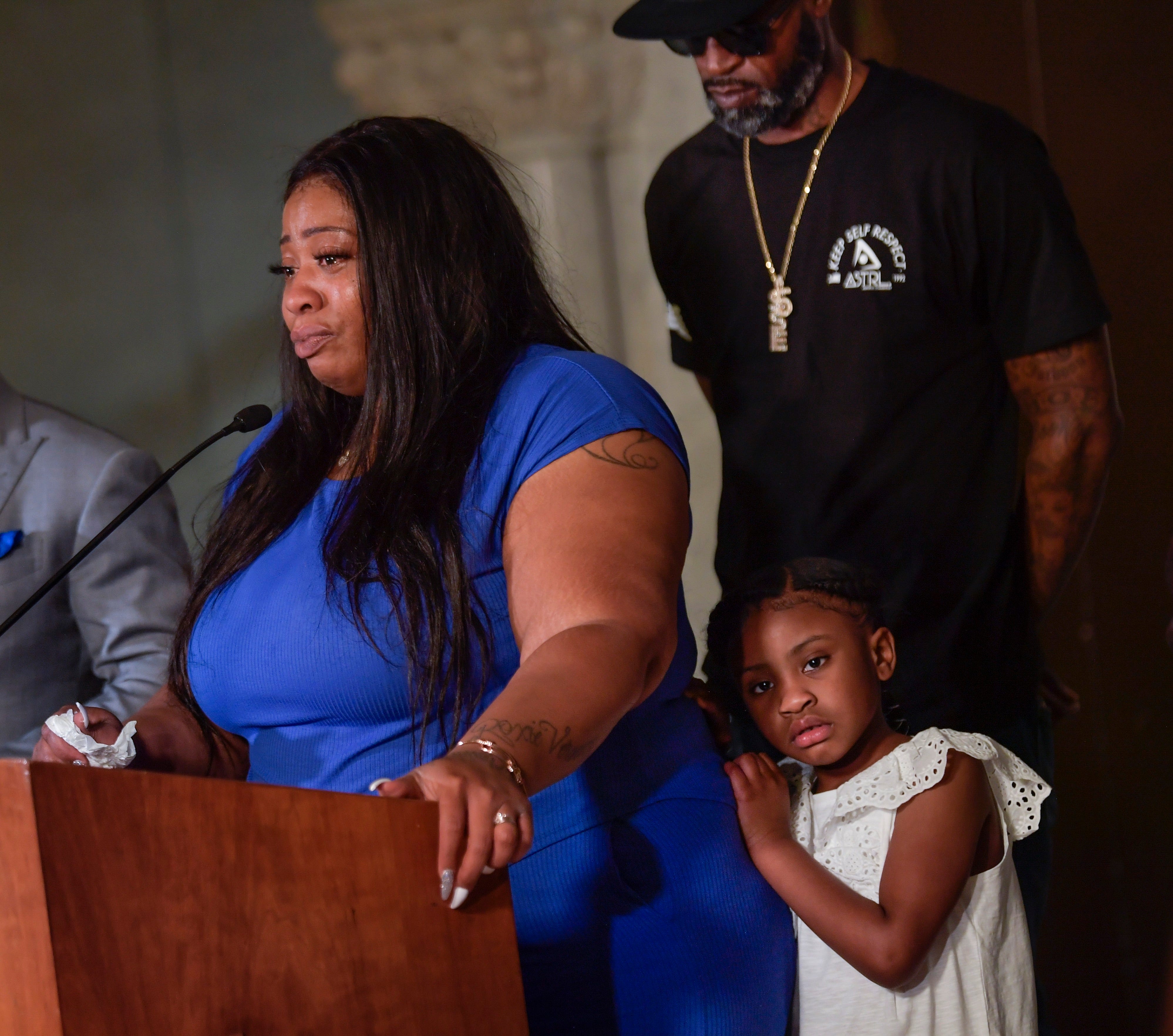 In subsequent years, many Republican and Democratic lawmakers began to embrace legal marijuana, reducing sentences for low-level drug offenders and drug addiction treatment instead of criminal charges. The political movement has represented a significant departure from federal drug policy of the past that often resulted in Black men serving long sentences for nonviolent crack cocaine crimes, while white offenders who used cocaine got comparatively light jail time.

“There is no question if crack had been a white kid’s disease it would have ended up in treatment, but it ended up in everyone going to jail,” said Robert Stutman, the special agent in charge of the Drug Enforcement Administration’s New York office during the 1980s war against crack cocaine.

Of the more than 840,000 people who have died since 1999 from a drug overdose, more than 70% in 2019 involved an opioid, according to the Centers for Disease Control and Prevention. While the opioid crisis has largely claimed white lives, opioid-involved overdose death rates in the Black community have skyrocketed in recent years, federal data show.

The addiction journey of Ross, who is white, and Floyd could help Americans see Black drug users in a sympathetic light, medical and legal experts said.

“They are ordinary drug users, they are ordinary people struggling with drug use. Black people end up hooked on drugs for the exact same reasons white people do,” said Yankah, the law professor.

“People use drugs for a variety of reasons, including managing physical and emotional pain. It’s because of those many reasons that oftentimes it’s hard to stop using,” said Sheila P. Vakharia, deputy director of the research and academic engagement for the Drug Policy Alliance, a nonprofit based in New York.

And yet Black people are often denied the same lifesaving medical treatment as white Americans to address opioid addiction, research shows. One study found Black patients were 77% less likely to receive buprenorphine, a drug that limits the desire for opioids.

Instead, Black Americans are often prescribed methadone, which requires most patients to show up at a medical office every day to get the drug, a significant barrier for low-income Americans, including many people of color, who do not work flexible hours or have access to transportation. 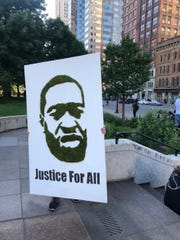 A protestor carries a poster featuring a picture of George Floyd on May 31, 2020. Floyd, a 46-year-old black man, was killed while in police custody after allegedly passing a counterfeit $20 bill at a convenience store.

“The way we give it to people is really terrible. Imagine if we made someone do that for their heart pressure medicine or their diabetes medicine,” said Vakharia.

For Americans without health insurance, both forms of treatment are often out of reach. And Hispanic, Asian and Black Americans are more likely to be uninsured than white Americans.

“The impact of incarceration, arrests and marginalization, which stem from racially motivated and punitive drug laws, adds to the physical suffering and makes it more difficult to get treatment and be treated humanely. It is these attitudes that give license to the Floyd defense team to try to paint him as worthless and ‘sick’ because he suffered from addiction,” said Deborah Agus, executive director of the Behavioral Health Leadership Institute in Baltimore, which focuses on ensuring vulnerable populations have access to better substance abuse treatment.

Data shows Americans are using heroin and fentanyl at the same rate, but the increase in opioid-related death rates among people of color is likely the result of disproportionate access to treatment for these groups compared to white Americans, said Pooja Lagisetty, a health services researcher at the University of Michigan whose research showed the disparity in buprenorphine treatment.

Both the prosecution and defense took care while discussing Floyd’s addiction. Such an approach would have been unimaginable two decades ago, medical and legal experts said.

Nelson on Thursday began his cross-examination of Ross with a display of sympathy: “I’m sorry to hear about your struggles with opioid addiction,” he began. “Thank you for sharing that with the jury.”

Meanwhile, the prosecution’s prompting of Ross to discuss how she and Floyd struggled with drugs as opposed to downplaying the drug use was also atypical.

In the past, drug use has been cited to villainize witnesses, suspects and those killed by police, especially when they were Black, said several medical and legal experts.

“I don’t think a defense attorney in the ’80s or ’90s would have said, ‘I’m sorry you are struggling with heroin or cocaine or crack’ in those times when it was considered an inner-city drug,” said Yankah, of Cardozo Law.

In this image from video, defense attorney Eric Nelson, left, and former Minneapolis police officer Derek Chauvin listen as Hennepin County Judge Peter Cahill presides over pre-trial motions prior to opening statements, Monday, March 29, 2021, in the trial of Chauvin, in the May 25, 2020, death of George Floyd at the Hennepin County Courthouse in Minneapolis, Minn. (Photo: Court TV via AP)

Floyd died on Memorial Day 2020 after police responded to a 911 call alleging that he had used a counterfeit $20 bill at a convenience store. Three other former police officers who responded to the call face charges in Floyd’s death.

Chauvin defended his actions to a witness after Floyd’s unresponsive body was taken away in an ambulance.

“We had to control this guy because he’s a sizable guy. It looks like he’s probably on something,” Chauvin is heard saying in a video.

In contrast, Chauvin’s own troubled past, including 18 complaints filed against him in 19 years as a Minneapolis police officer, will not be the focus of the criminal trial to avoid influencing the jury against him.

In her testimony, Ross, 45, described Floyd as a fun, kind man who offered to pray with her the first time they met, when she was visiting her son’s father at a homeless shelter where Floyd worked as a security guard. 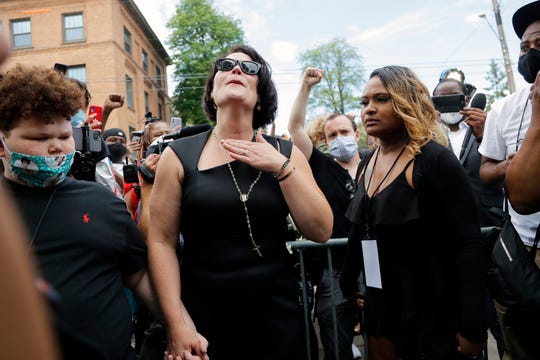 Courteney Ross, center, who had been dating George Floyd, reacts after a memorial service for Floyd at North Central University on Thursday, June 4, 2020, in Minneapolis. (Photo: Julio Cortez, AP)

She said he was active and never had trouble breathing before his run-in with Chauvin.

Keith Humphreys, a behavioral sciences professor at Stanford University in California and a former member of the George W. Bush White House Advisory Commission on Drug Free Communities, said if Chauvin and other officers suspected Floyd was high, they should have taken it more seriously when he said he couldn’t breathe because opioid use can slow respiration.

“Even if he was addicted, he didn’t deserve to be killed. It shows the devaluation of the lives of people with drug problems,” Humphreys said. “Police take into custody millions of intoxicated people every year without this happening.”